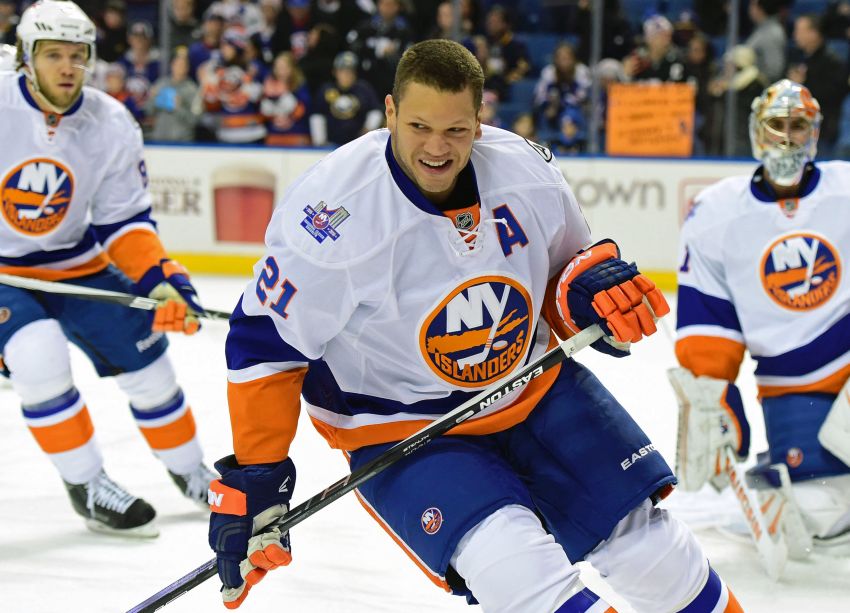 BUFFALO – The pickings are so slim in NHL free agency this year, perhaps the most coveted player available, Kyle Okposo, has never cracked the 30-goal or 70-point marks.

Okposo, of course, is a talented winger. The Minnesota native is coming off a 22-goal, 64-point season with the New York Islanders. He has 139 goals and 369 points in 529 NHL games over nine years, including three 20-goal seasons and two 60-point campaigns.

Yes, Okposo has been productive over the years. But is he worth a long-term contract worth the $7 million a season he is reportedly seeking, according to Newsday? The Isles refused to pay him.

Given dearth of talent available when the market opens at noon today, Okposo will cash a lucrative deal somewhere, perhaps with the Sabres, who want to add a winger to their top two lines.

Okposo spent seven years as John Tavares’ teammate, so he has occasionally played beside a star center. In Jack Eichel and Ryan O’Reilly, the Sabres potentially possess two premier pivots.

So instead of pursuing the best free agent in NHL history, the Sabres and anyone searching for more scoring might examine (and almost certainly overpay) the likes of Boston Bruins winger Loui Eriksson, Chicago Blackhawks center Andrew Ladd or former Sabres winger Jamie McGinn, who finished the season on a nice run with the Anaheim Ducks.

McGinn scored 14 of his career-high 22 goals with the Sabres in 2015-16. Could he return? McGinn, 27, played well during his 63-game run, skating all over the lineup. He’s also close to Eichel and O’Reilly.

Still, the Sabres seemed uninterested in re-signing McGinn before the trade deadline. After eight goals in 22 games in Anaheim, his price will never be higher.

It can be argued scoring is the Sabres’ most glaring need. They mustered only 199 goals last season, the third straight full season they failed to hit the 200-score mark.

Keep in mind, however, they have Harvard winger Jimmy Vesey’s negotiating rights until Aug. 15 after trading a third-round pick to the Nashville Predators. The Sabres can officially sign the Hobey Baker Award winner today.

While Vesey, 23, has never played a pro game, if he signs, Murray and coach Dan Bylsma clearly want him to be one of the Sabres’ top forwards.

“You salivate a little bit with the possibility of adding a top-six winger to your team,” Bylsma, who coached Vesey last year with the United States at the world championship, said Saturday.

Vesey, who would make less than $1 million, could be a better option than overpaying for a veteran.

Murray has radically revamped the Sabres in the last two years, almost completely overhauling the lineup. Their needs have become fewer and fewer.

Here are the Sabres’ free agents and what they might be looking for:

The Calgary native, an unrestricted free agent, often talks about his desire to become a starting goalie. With Robin Lehner in Buffalo, that opportunity probably won’t materialize here.

No. 1 jobs are scarce, so Johnson might have to a settle for a team with a shaky or unproven starter. His hometown Flames just acquired former St. Louis Blues netminder Brian Elliott, who has thrived in a tandem before.

Murray has said the Sabres are interested in re-signing Johnson.

Considering Lehner suffered a season-ending concussion in 2014-15 and underwent season-ending ankle surgery late in 2015-16 after the injury dogged him all year, the Sabres need to find a strong backup. Prospects Jason Kasdorf and Linus Ullmark need time to develop in the AHL.

Defense: The Sabres probably made their biggest offseason defense move Saturday, trading Mark Pysyk to the Florida Panthers for Dmitri Kulikov, a lefty they have slotted for the first or second pair.

Still, the Sabres must add defensemen. Right now, not counting restricted free agent Rasmus Ristolainen, only five with NHL experience are under contract for 2016-17. Jake McCabe signed a three-year, $4.8 million extension Thursday, according to multiple reports. McCabe would have become a restricted free agent today.

They probably need to sign at least four more for the organization. Likable veteran Carlo Colaiacovo, who played 36 games last season, has said he likes mentoring and would accept a similar NHL depth role again. Mike Weber, who the Sabres traded in February, is also a free agent.

They could use a power play quarterback. Former Sabre Brian Campbell is available, but is reportedly close to signing with the Chicago Blackhawks.

Forwards: David Legwand, the fourth-line center most of last season, is an unrestricted free agent. Given his age (35) and low production (14 points) the Sabres might want to look elsewhere for forward depth.

Forty-three prospects, including eighth overall pick Alexander Nylander and the Sabres’ nine other 2016 draft picks, will participate in the team’s summer development camp at HarborCenter.