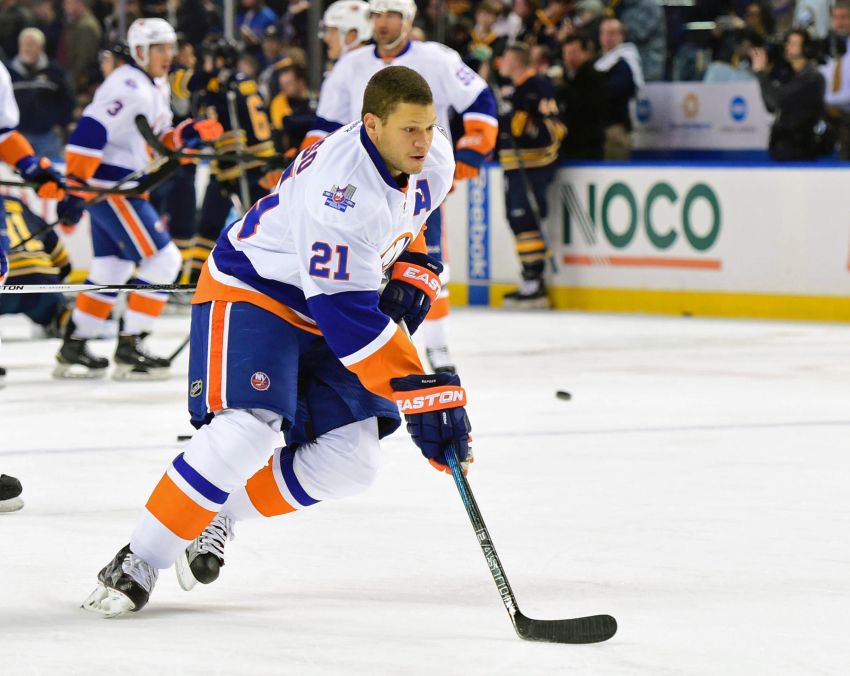 BUFFALO – Winger Kyle Okposo, arguably the best free agent available, signed a seven-year, $42 million contract with the Sabres shortly after the market opened this afternoon, according to multiple reports.

The signing is significant. Just 15 months removed from their second consecutive 30th-place finish, the Sabres, who improved 27 points last season, secured a strong talent to play beside centers Jack Eichel or Ryan O’Reilly.

While some may argue the Sabres overpaid the Minnesota native, there are a dearth of scorers available, and with three 20-goal seasons and two 60-point campaigns Okposo, 28, was one of the best available.

With Okposo, the Sabres have five players on the roster – Eichel, O’Reilly, Evander Kane and Sam Reinhart – who scored 20 or more goals last season.

Okposo has 67 goals and 184 points in 210 games (.80 points a game) over the last three seasons, the 26th-highest point total in that span, according to hockey-reference.com. That’s four more points than O’Reilly recorded in that stretch in 23 fewer games.

New Update: Here are some Okposo quotes from a conference call. What sold Okposo on the Sabres, he said, was “the chance to win a Stanley Cup.”

“I think we have a lot of pieces in play that can help us achieve that goal, and that was the first factor,” he said. “I looked at their forwards, and especially their top-two centers, O’Reilly and Eichel, those guys are going to continue to get better, especially Jack. He’s got superstar status, and you definitely need that to win a Stanley Cup.”

“As an organization, I didn’t hear one bad thing about the Buffalo Sabres. I think the organization really reflects upon your owner, and I’ve heard that the Pegulas do a fantastic job and are great people to play for and work for.”

On his role on the ice:

“I hope I can provide just a veteran presence. I’ve gone through this before where I kind of went through the rebuild a couple years ago. I think they’re at an accelerated rate. I think last year they were really hard to play against. I think they’ve definitely come a long way from the year before. So having gone through kind of a rebuild and knowing the next step that needs to come, I think we can get there quicker than I can with the Islanders.”

The Sabres have also lost backup goalie Chad Johnson, who signed a one-year, $1.7 million deal with his hometown Calgary Flames, according to Sportsnet’s Elliotte Friedman. Johnson, 30, enjoyed a breakout 2015-16 season.

Johnson wants the opportunity to start, and while the Flames just acquired goalie Brian Elliott, he could have that opportunity in Calgary.

Update: Here are some quotes from Sabres general manager Tim Murray, who said he met Sunday with superstar Steven Stamkos, who re-signed with the Tampa Bay Lightning on Wednesday:

On the significance of signing Okposo:

“It means a lot. It means, what I have felt since I’ve got here, that we can be a destination for good players. I think this shows that we are. He’s a hell of a player. He’s a goal scorer, he’s got a power forward’s body. He’s put up very good numbers.”

On meeting next week with winger Jimmy Vesey, whose rights the Sabres acquired last week:

“(I’m going to) extoll the virtues the organization and the city of Buffalo and tell him how much we like him and we need him and go from there.”

A perturbed Murray said a goalie backed out of a verbal agreement. At this point, he’s open to anything – a signing, trade or even getting an AHL guy and letting Linus Ullmark start in Buffalo.

“I thought I had a goalie done, I had a verbal agreement and it was reneged up about a half an hour after we had put him on our depth chart. So that’s life.”

The Sabres have also made two depth signings for the Rochester Americans, their AHL affiliate.

The Sabres also lost defenseman Chad Ruhwedel, who signed a two-way deal with the Pittsburgh Penguins worth $575,000 in the NHL. Ruhwedel, 26, played 33 games for the Sabres over four seasons, but made only one appearance last year.

The San Diego native compiled 24 goals and 90 points in 178 contests with the Amerks.