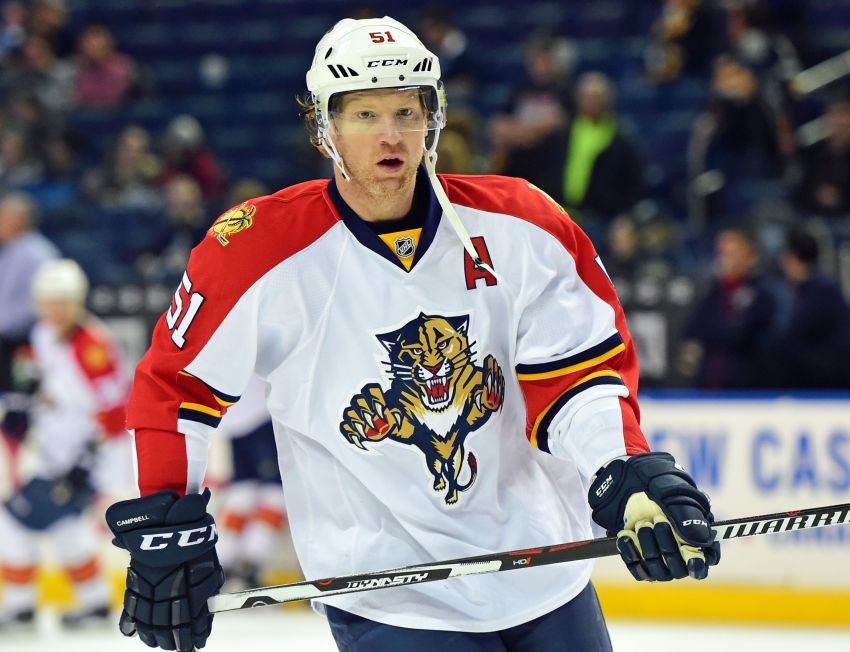 BUFFALO – More than 12 years later, the number is seared into Brian Campbell’s memory. It is a part of the popular former Sabres defenseman. After a Stanley Cup and multiple NHL All-Star appearances, it still motivates the Florida Panthers standout as he approaches a prestigious milestone.

“I don’t forget how many healthy scratches I had,” Campbell said Tuesday prior to scoring a goal and two points in the Panthers’ 7-4 win against the Sabres. “I had 29 the one season. I never forget that. That’s something I live on.”

Tuesday’s contest was Campbell’s 974th NHL appearance. If everything works out, the durable 36-year-old should hit the 1,000-game mark on April 5 in Montreal.

“I don’t think there’s many people that would’ve bet on that one starting out and everything,” Campbell said inside the First Niagara Center.

Probably not. Barely 10 years ago, Campbell’s future in the league seemed iffy. That’s why he’s so proud of the bumps he endured early on. They make reaching 1,000 games that much sweeter.

“I just think I could look back and say, ‘I did that,’” he said. “I think it’d be really rewarding. I put a lot of hard work into it. Coming up here, I wasn’t given anything. I earned it, I feel like. I had some great coaches, obviously, to help me along the way. I felt like I battled. Hard work paid off. It’s a great story and something I can be very proud of.”

Campbell didn’t even play 70 games in a season until 2005-06, a campaign in which the Sabres scratched him three times early on. Twice in October of that season he skated less than six minutes in a game.

“Then finally I got to play,” Campbell said.

By the end of the year, when the Sabres lost to Carolina in the Eastern Conference final, Campbell was skating more than 25 minutes some nights as the No. 1 defenseman. The next season the former sixth-round pick earned his first All-Star selection.

Why did Campbell, who played 391 games with the Sabres, finally emerge? He developed some much-needed confidence playing in Finland during the lockout in 2004-05. When he returned, the league opened the game up, helping slick, undersized talents like him thrive.

“I came back, finally it clicked,” Campbell said. “I was given a good opportunity. I took it and ran with it.”

So how long would Campbell, a free agent this summer, like to play? The upstart Panthers could be contenders for years. He figures he has at least two more years left.

“After that, I think it’s kind of you just take it year by year,” he said. “I feel great.”