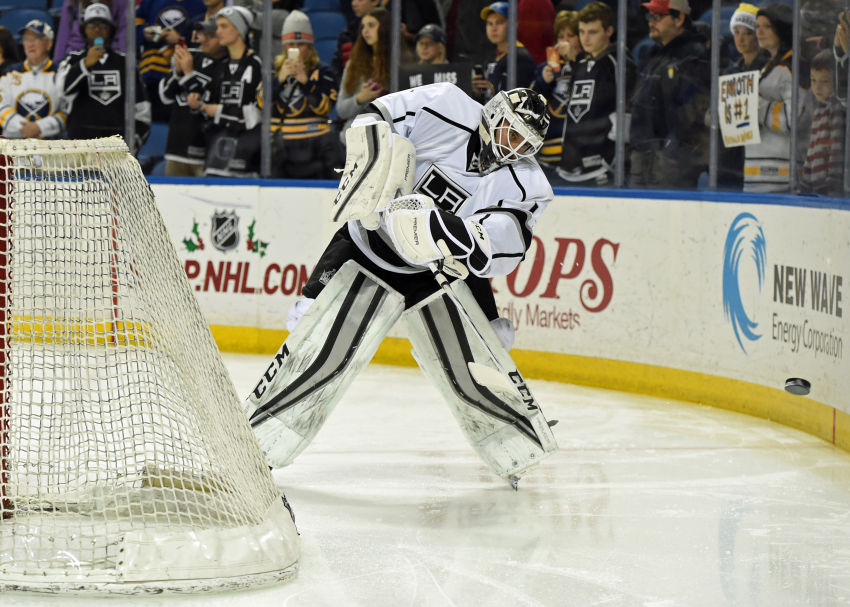 BUFFALO – Los Angeles Kings goalie Jhonas Enroth takes his fondest memories of his five year-run with the Sabres from the franchise’s darkest days.

Throughout all the losing and turmoil last season, he tended some of his best goal ever, briefly becoming the Sabres’ most valuable player.

Sure, Enroth detested losing. He usually looked beaten down after losses. Still, to the Swede, who briefly lived his dream of becoming the Sabres’ No. 1 goalie, some of those memories are special.

“It’s a season I’m very proud of, and looking back at it, I can smile when think about that season,” Enroth said Saturday prior to the Kings’ 2-1 overtime loss to the Sabres. “It was a tough season for us, but I got to play a lot of games. I felt good throughout that year and (it was) a good experience. I think that’s probably the biggest experience or biggest memory from my Sabres time.”

Despite the constant losing, Enroth, 27, wanted to stay. But as an upcoming free agent, the Sabres used him as a piece to acquire assets for the future, trading him to the Dallas Stars on Feb. 11.

Suddenly leaving the team that drafted and developed him after nine years “was pretty emotional.”

“At the time, I didn’t want to get traded,” Enroth said inside the First Niagara Center. “But looking back at it now, I think it was a really good experience. I think I grew from that experience, both in a personal way and a goaltender, too.”

In Dallas, Enroth played for a better team and learned how a different organization operated. He signed a one-year, $1.25 million contract with the Kings on July 1.

Saturday was a special night for Enroth.

These days, Enroth is a backup again – a seldom-used one at that – behind Jonathan Quick. Saturday was only Enroth’s sixth appearance this season and his first in nine games. He began the night 3-1 with a 1.17 goals-against average and a .962 save percentage.

Having spent so many years playing behind starter Ryan Miller, Enroth understands his role.

“I feel like I know what I need to do now that I’m a couple years older,” he said.

Only 11 former teammates played for the Sabres on Saturday. While Enroth has moved on and is happy with the Kings, he still keeps tabs on his old club.

“I’m not more than human, right?” he said. “So, of course, I keep an eye on the Sabres, because it was the first team I ever got to play for.”

After the Sabres exercised a buyout on Christian Ehrhoff’s 10-year, $40 million contract in 2014, the defenseman essentially bet on himself, signing a one-year deal with Pittsburgh.

But concussion problems limited the German to 49 games with the Penguins, and he found a tough free agent market during the summer. The Kings signed Ehrhoff to a one-year, $1.5 million deal on Aug. 23.

“It was little different than other summers coming off the two concussions and having basically only played a few games since late January,” Ehrhoff said. “It took me a lot longer to get back into shape.”