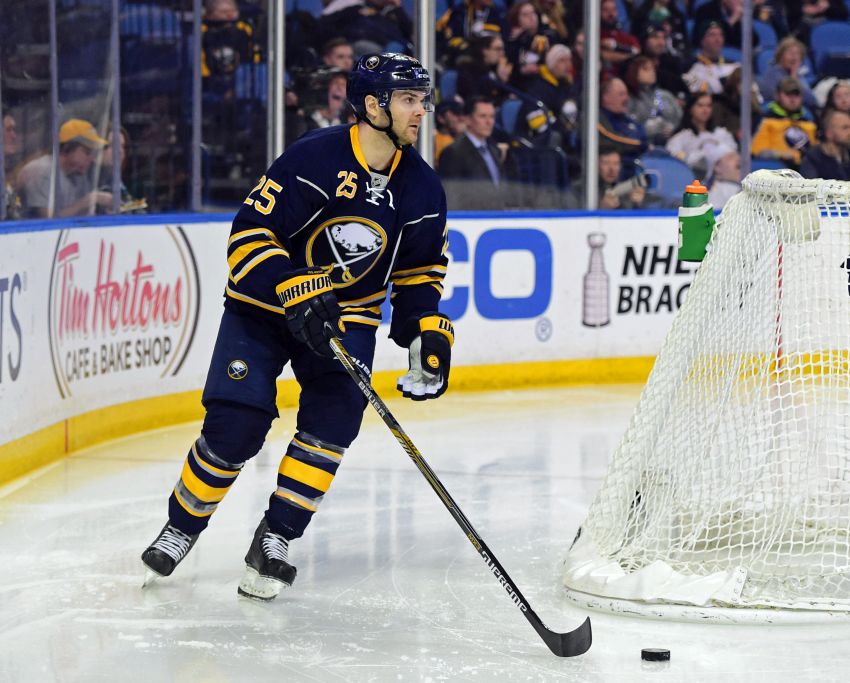 BUFFALO – Carlo Colaiacovo’s goal when he signed a one-year contract in July was pretty straightforward. Following three seasons of sporadic duty, the veteran defenseman wanted to become an everyday player again with the Sabres.

“When I signed in Buffalo, I believed that opportunity was there for me, and obviously things change,” Colaiacovo said last week.

Things changed a lot on the blue line in a hurry.

Throw in a surprising lack of injuries – the Sabres stayed so healthy they recalled a defender for one game all season ­– and Colaiacovo, 33, was usually the odd man out.

“The role I was put in this year is not an easy role to accept, especially when you love playing hockey,” he said.

Still, Colaiacovo would accept a similar role here next season. He said he’s excited the Sabres are “basically on the cusp of being a regular winning organization.” He likes ownership’s commitment and the growth he witnessed in the club from top to bottom.

“To be honest with you, I want to be around to see the fruits of this growth,” Colaiacovo said. “It’s always something special for me to see the Buffalo fans deserving of a championship.”

The Sabres don’t have any AHL defensemen ready to graduate, meaning they’ll need depth next season.

“I’m a guy who can accept his role … and fill in and do what’s asked when asked for,” Colaiacovo said. “I think I showed that this year and would love to continue doing that in years forward.”

The team’s oldest defenseman – the former first-round pick entered the NHL in 2002-03 – believes he can keep passing along his experience to youngsters. He said he takes a lot of pride in mentoring Sabres defensemen like Mark Pysyk and Rasmus Ristolainen.

Having played for so long and for some of the league’s best coaches, Colaiacovo, who battled injuries earlier in his career, has been through a bit of everything.

Colaiacovo handled being a spare defenseman more than half the season in 2015-16.

From Dec. 7 to Feb. 19, he sat 30 out of 32 contests, including 15 straight. When the Sabres signed NCAA defense prospect Casey Nelson in March, Colaiacovo was scratched again after playing 11 straight games.

“I can only control what I can control, and I felt like … that’s what I did,” Colaiacovo said about being scratched. “I controlled what I controlled.”

That meant preparing like he was going to play.

The affable Colaiacovo also spoke to Sabres coach Dan Bylsma regularly and said he respects him and understands he has tough decisions. Every game, Bylsma said in March, Colaiacovo told him he was ready to play.

“There’s no secret I wanted to play, and the last thing I wanted to be was a guy who put himself in front of the team and be a thorn in his side by bugging him, being a distraction,” Colaiacovo said. “That’s not me. It’s always a team-first mentality for me. Coaches got to do what they got to do.

“To me, the easiest thing about being in the role I was put in was having a sense of clarity and having great communication, and that’s what I wanted.”

One thought on “Sabres’ Carlo Colaiacovo hopes to return”