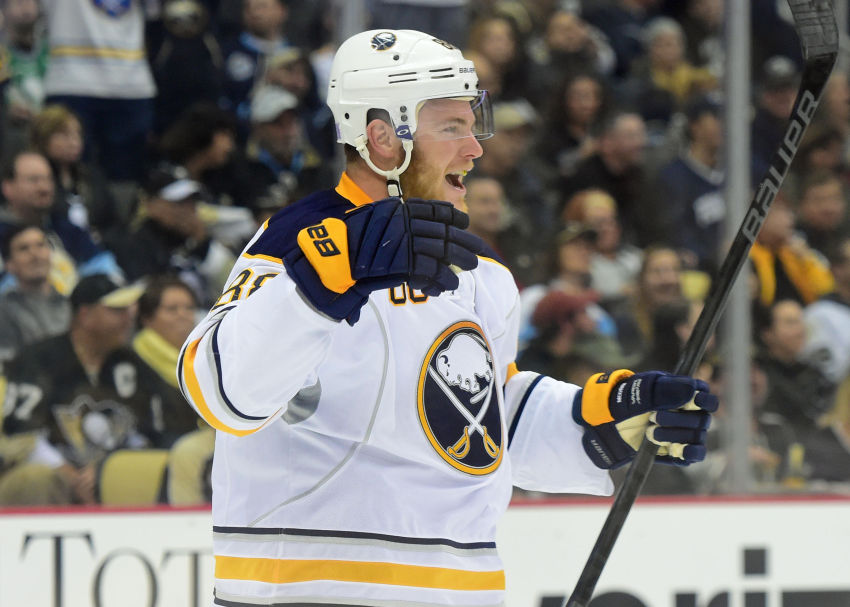 BUFFALO – Right away, Jamie McGinn could hear the excitement in Ryan O’Reilly’s voice. It was June 26, and the two friends had just been traded from the Colorado Avalanche, only they didn’t know they would be joining the Sabres together.

So McGinn and O’Reilly called each other when they learned the full details of the blockbuster deal from television.

The two forwards had grown close over the years, and they knew moving to a new team together would be a special experience.

“We were great friends in Colorado since Day One,” McGinn said Sunday inside HarborCenter. “To do it with one of your best friends on the team, that’s something that’s so rare. To be able to do that just helps the transition. We still talk all the time and (are) still best buddies.”

O’Reilly added: “Seeing that he’s coming with me helped make the transition a lot easier. (It’s nice) having a guy you’re so close with that experienced so much together.”

Right now, McGinn and O’Reilly are also together as linemates on the Sabres’ No. 1 trio with Sam Reinhart.

McGinn, 27, might be playing some of his best hockey ever entering tonight’s road tilt against the Detroit Red Wings. The left winger has three goals and eight points in the last eight games after scoring a nifty between-the-legs power-play goal in Saturday’s 2-1 win against Los Angeles.

O’Reilly, 24, scored the slick overtime winner later, giving him three goals and 10 points during his seven-game point run. The center could tie his career-best streak tonight.

The Sabres dished three notable prospects under 21 and a second-round pick in a deep draft to the Avs so they could acquire established NHL talent that would provide them an immediate impact.

So far, the trade has already paid huge dividends. O’Reilly has been the Sabres’ best forward, skating big minutes and playing in every situation while compiling a team-best 10 goals and 27 points in 30 games.

Where would the Sabres, who have only 12 wins and 27 points, be without him?

Meanwhile, McGinn, who has six goals and 14 points, might be the Sabres’ biggest surprise and most versatile forward. He can be plugged in anywhere. McGinn has skated on every line this season beside just about everyone.

“I’m just trying to be that piece that they don’t have and trying to be physical and being a presence out there, so it doesn’t matter where I’m playing, my game doesn’t change, whether it’s fourth line or first line,” McGinn said. “I have to do the things that make me successful by keeping it simple, being physical and getting to those dirty areas in front of the net.”

“I know playing with him just keep the stick down and he’s going to find you the puck or get the puck to the net or make that move,” McGinn said. “So I’m just enjoying it. We clicked before, and I’m glad we’re continuing it. I know we enjoy playing with each other because he’s a special talent.”

“He’s versatile,” O’Reilly said. “You can use him in any situation. He’s a guy that’s probably one of my best friends. I know how good of a guy he is. Everyone loves him. Everyone, they want to play with him. He’s easy to play with.”

But they couldn’t play together most of last year after McGinn underwent season-ending back surgery. Getting his skating legs and feet back in training camp has been “a big factor” for McGinn, Bylsma said.

“You’re seeing that now, and now you’re seeing him again in that opportunity to score and scoring goals for us,” he said.

McGinn added: “The legs feel good. It’s just good to get back into the rhythm of things. It’s been a long time.”

Notes: Sabres winger Tyler Ennis (upper body) has been skating on his own. Bylsma had no new update on Ennis, who’s week-to-week. … Goalie Robin Lehner, out since suffering a high ankle sprain opening night, was also on the ice with Ennis on Sunday after their teammates.