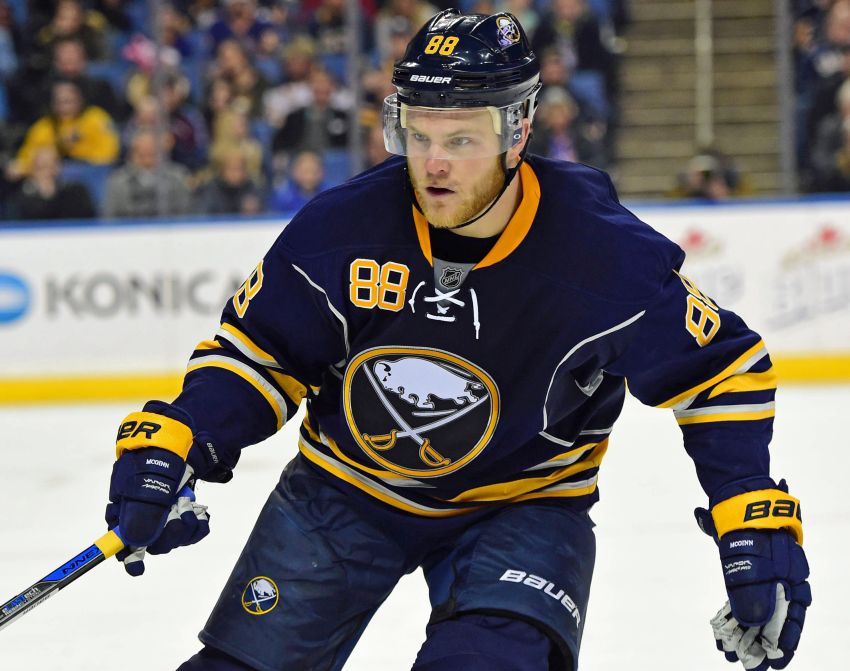 BUFFALO – Sabres center Jack Eichel kept smiling and glancing over trying to get Jamie McGinn’s attention inside the dressing room as he praised his buddy earlier this week.

Eventually, the veteran winger caught on, walked over to the rookie’s media scrum and joined the interview by sticking his water bottle into the mix of microphones and recorders.

In just six months as teammates, Eichel, 19, and McGinn, 27, have grown close.

On the ice, Eichel has often pivoted the versatile McGinn, a close friend he calls “Jimbo.” They’ve also bonded away from the rink.

“He’s just an easygoing guy,” Eichel said. “I think we have a lot in common. He’s a guy that likes to mess around and give it to other guys. I’m the same way. I always like to give it to him. He’s a good sport about it. He’s a good buddy of mine.

“I (spend) a lot of time with him off the ice and obviously have chemistry on the ice. He’s just a great guy to be around.”

But McGinn, an upcoming unrestricted free agent, could be entering his final days in Buffalo. General manager Tim Murray almost certainly wants to get an asset back for McGinn if he can’t re-sign him before the Feb. 29 trade deadline.

Murray recently told WGR he has talked about a contract extension with McGinn’s agent.

“It would be great to have him stick around,” Eichel said.

McGinn quickly became one of the team’s most valuable wingers earlier this season. Right now, his 12 goals and 25 points both rank fifth. He’s Murray’s biggest chip among the five players with expiring contracts and could be a coveted rental player for a contender.

Does McGinn want to stay? It appears he’s found almost a perfect fit.

Thanks to his ability to skate on any line and a strong touch around the net, McGinn plays 14 minutes a game. In addition to Eichel, he has another close friend on the team, center Ryan O’Reilly, the biggest piece in the blockbuster trade with the Colorado Avalanche that brought them to Buffalo.

On the open market, McGinn could command a three- or four-year contract worth more than $3 million a season. He’s earning $3 million this season.

Still, McGinn might find the grass isn’t greener somewhere else.

“It has to work for both sides,” McGinn said about staying in Buffalo. “That’s why I pay my agent. He’s the one who deals with that kind of stuff. I try to just worry about hockey. If I start worrying about politics and everything that’s going on off the ice, it’s easy to get distracted.”

Many fans and observers were too distracted by O’Reilly’s arrival to realize the Sabres had also acquired McGinn, a 19-goal scorer in 2013-14, in the deal.

Before training camp, McGinn said he wanted to prove he was more than a throw-in. Clearly, he’s accomplished that.

“You can put him anywhere – power play, right side, first line, fourth line – it doesn’t matter,” Eichel said. “He can play it however you want to play it.”

Why does McGinn fit in so well with the Sabres? Coming with O’Reilly, his best friend, made the transition “that much easier,” he said. McGinn also believes Buffalo’s dressing room is one of the best he’s been a part of in his eight seasons.

“The guys are great,” he said. “I’m kind of waiting for my chance to be a leader, and I feel like … I am doing that here, lead and show by example … young guys what the NHL is. …

“I like the challenge and I’ve kind of been waiting for this role. I hope I can do a good job with it.”

McGinn’s job mentoring Eichel, who’s under an enormous amount of pressure as the new face of the franchise, has helped the youngster transition to the NHL.

“To be able to … become good friends with him off the ice I think is pretty special,” McGinn said. “He’s going to be a special young talent and in this league for a long time. So I’m just trying to help him along the way.”

One thought on “Jamie McGinn on staying with Sabres: ‘It has to work for both sides’”