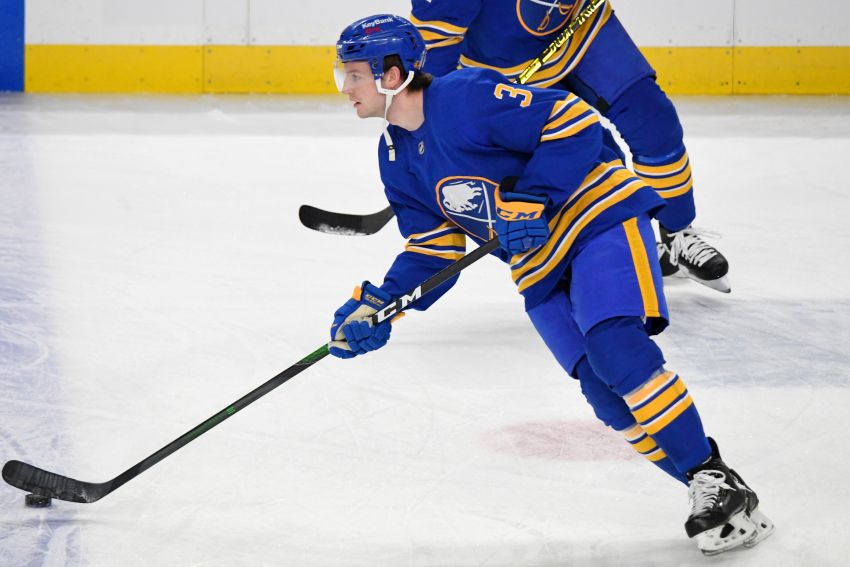 Since the Buffalo Sabres drafted Will Borgen 92nd overall in 2015, he has morphed from a relatively unknown prospect into a defenseman on the cusp of regular NHL duty.

The Sabres have guided Borgen’s development from his college career at St. Cloud State through his early pro days with the Rochester Americans to the big leagues.

Prior to breaking his forearm last season, Borgen, 24, appeared to be close to securing a spot on Buffalo’s blue line. Following a two-month absence, Borgen returned in late April, pushing veteran Colin Miller out of the lineup.

But Borgen’s future in Buffalo is uncertain. Every team except the Vegas Golden Knights, who entered the league in 2017, will lose one player to the Seattle Kraken in Wednesday’s NHL Expansion Draft.

Teams must submit a protected list of seven forwards, three defensemen and one goalie or eight skaters (forwards and defensemen) and one goalie to the NHL by today. First- and second-year pros and unsigned draft picks are exempt.

General manager Kevyn Adams might need to complete a side deal so his counterpart, Ron Francis, lays off a young player like Borgen.

Winger Jeff Skinner did the Sabres a huge favor earlier this week by waiving the no-movement clause in his eight-year, $72 million contract. By allowing himself to be exposed in the draft – the Kraken likely don’t want a $9 million player fresh off a miserable seven-goal season – the Sabres can protect a young forward like Rasmus Asplund, Anders Bjork or Tage Thompson.

But Francis, Adams’ old teammate, will still pluck an asset from the Sabres, who might go the seven-three-one route to protect their top players.

Of course, disgruntled captain Jack Eichel and center Sam Reinhart, who could be traded this summer, must be protected.

If the Sabres also safeguard Asplund, Bjork, Thompson, Casey Mittelstadt and Victor Olofsson up front, winger Zemgus Girgensons, who missed all of last season after undergoing hamstring surgery, would be left unprotected.

What if the Sabres decide Borgen is too valuable to expose? If they protect Borgen and defensemen Rasmus Dahlin and Henri Jokiharju, would they dare make the frustrated Rasmus Ristolainen available?

Ristolainen, 26, has one year left on his contract and has been blunt about how much he detests the constant losing he has endured over his eight-year career. The Finn said in May he was open to staying or being traded.

But despite his short term, Ristolainen, the Sabres’ top defenseman, would fetch a strong return through a trade, so he will likely be protected.

The Kraken will almost certainly have an intriguing option to consider from Buffalo’s blue line: Miller.

Yes, Miller, 28, has struggled over his two seasons with the Sabres, regularly getting scratched. He compiled a wretched minus-20 rating last season. Still, he thrived during his two-year run in Vegas.

After the Golden Knights grabbed Miller from the Boston Bruins in the 2017 expansion draft, he enjoyed a career season, compiling 10 goals and 41 points in 82 regular-season games. He played all 102 contests during the Golden Knights’ stunning run to the Stanley Cup final.

Miller’s unique understanding off how a team full of castoffs in Vegas quickly came together to make history could be valuable to the Kraken.

Dustin Tokarski, who played 13 games for the Sabres last season, is the only goalie in the organization who meets the requirements to be exposed in the expansion draft.

The Sabres have 10 picks in next Friday’s NHL Draft, and Adams has acknowledged he accumulated extra selections because he could need some for the Kraken.

In 2017, ex-GM Sabres Jason Botterill, now one of Francis’ assistants, gave the Golden Knights a sixth-round pick so they wouldn’t take goalie Linus Ullmark. Instead, they choose winger William Carrier, who is still a regular for them.

The assets the Golden Knights accumulated helped them quickly become an NHL heavyweight. The Minnesota Wild, for example, handed them winger Alex Tuch so they would stay away from some defensemen.

Tuch, the 18th pick in 2014, has established himself as one of the Golden Knights’ cornerstone players. The Wild simply gave way a first-round pick.