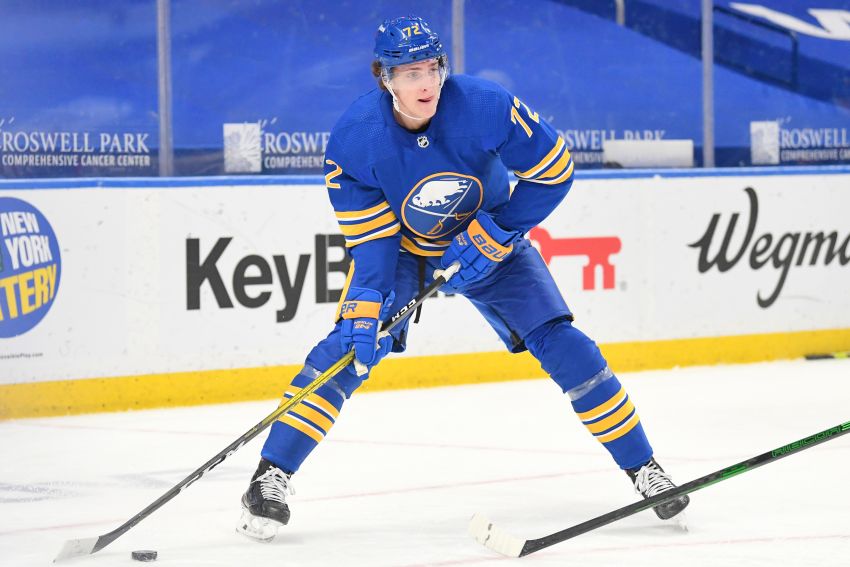 Of course, the outcomes won’t affect the standings. Saturday afternoon’s 3-2 loss to the Pittsburgh Penguins officially eliminated them from the postseason for a record-tying 10th consecutive season.

Still, the final weeks of this campaign will shape the Sabres’ future. Interim coach Don Granato has handed the keys over to some of his young players, and so far, they’ve seized their opportunities.

Earlier this season, Mittelstadt and Thompson struggled to earn spots in the lineup. Now, with several veterans injured, they’ve taken leading roles under Granato, playing the best hockey of their young careers.

The Sabres’ arduous late-season schedule offers their young a special chance to develop against prime competition. They close the season against East Division heavyweights, playing only Pittsburgh, the Boston Bruins, New York Islanders and New York Rangers over their final 12 games.

“It’s obviously a great opportunity, not only for myself but all the young guys,” Thompson said on a Zoom call. “I think the team in general, when you to play against better teams, learning how to win these games, obviously, we didn’t get the result we wanted tonight, but I thought we played a really well-rounded game.”

On Saturday, the Sabres continued their trend of roaring back. After Mittelstadt’s power-play goal 11:44 into the third period, center Sam Reinhart’s redirection in the waning minutes slid by Penguins goalie Tristan Jarry but hit the post inside KeyBank Center.

Mittelstadt has developed into the Sabres’ best offensive threat, scoring seven goals and nine points in his last 10 games. Remember, he mustered just one goal and four points in his first 19 games, mostly as a third- or-fourth line winger.

Thompson, meanwhile, enjoyed one of his best NHL outings, scoring his fifth goal in nine games in the second period shortly after the Sabres fell behind 2-0. He also pumped six shots on goal, tying his career high.

“I think with opportunity you gain confidence,” Thompson said. “I think the more you touch the ice or touch the puck you realize you can make certain plays out there and you’re not gripping your stick to tight. In the past, you’re maybe just focused on trying to stay in the lineup. Now I’m really just going out there and playing and not really thinking. I think that’s good for me.”

Granato wants the young players to take ownership of the situation they’re experiencing.

“It’s key opportunity for them and they’re doing a great job pushing and fighting and scratching and clawing,” he said. “It’s going to be helpful in the future, there’s no question, the effort they’re putting in right now.”

“The sooner we can move on and not worry about who that is, certainly respect their skill set, but not worry about it, the better. I think Dylan was good in that regard tonight and only get better as all of them will.”

The Sabres, who host the Penguins again Sunday afternoon, gave up 41 shots, a heavy workload for goalie Dustin Tokarski. Prior to the game, Granato said he hadn’t thought about Sunday’s goalie plan. Michael Houser, who has never played an NHL game, backed up Tokarski.

The Sabres summoned top goalie prospect Ukko-Pekka Luukkonen to taxi squad before the contest. Granato said the Finn will play at some point.

But Luukkonen has been recovering from a lower-body injury, so it seems unlikely he would play his first NHL game without some practice time.