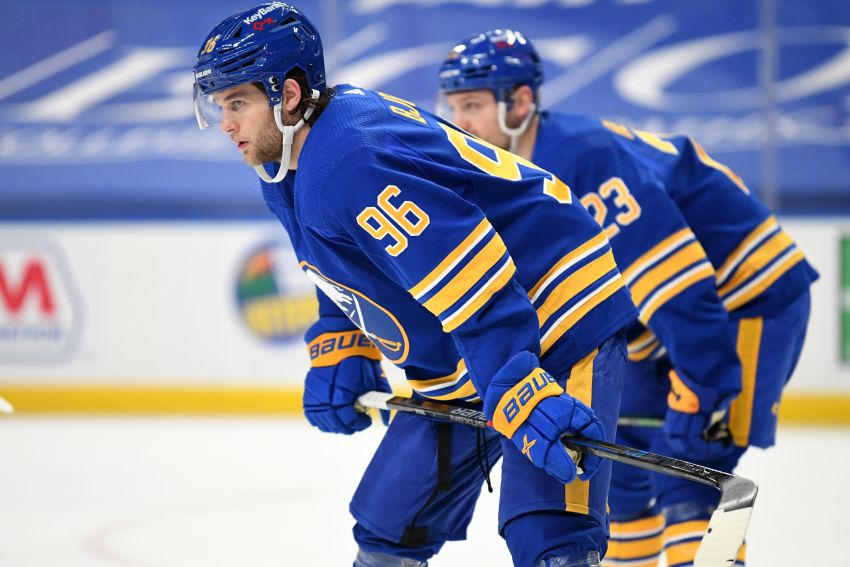 First, Bjork redirected defenseman Colin Miller’s point shot past Islanders goalie Ilya Sorokin late in the second period. Then Bjork scored from the right circle 10:56 into the third period, tying a game the Sabres would win 4-3 in a shootout.

What do both goals have in common? Bjork, 24, created them by tenaciously pursuing the puck and keeping it in the New York Zone.

On his first goal, Bjork intercepted Josh Bailey’s pass inside the blue line. On his second, the winger beat Andy Greene to a loose puck and moved it deep in the zone.

“He was dynamic,” interim Sabres coach Don Granato said on a Zoom call following the game. “Getting to pucks, pressuring pucks, hanging on and possessing pucks, and obviously finishing. He’s got a lot of talent and he’s getting more and more comfortable every day and developing chemistry and figuring out our system and how we want to play.

“It’s all adding up and it’s fun to watch when that happens. And he’s a hell of a good kid and teammate, too.”

Bjork capped the night by scoring the shootout winner, giving the Sabres their second straight come-from-behind victory over the stingy Islanders inside KeyBank Center.

Just 13 games into his Sabres career, Bjork, a part of the Taylor Hall trade with Boston Bruins last month, has been promoted to left wing on the first line. He will likely skate beside center Sam Reinhart and Victor Olofsson again in tonight’s road contest against the Pittsburgh Penguins at PPG Paints Arena.

Bjork, having battled injuries and become a healthy scratch in Boston, welcomed a fresh opportunity in Buffalo. The Sabres targeted the American as a player they believe possessed offensive upside and could grow into a larger role.

So far, the 6-foot, 197-pound Bjork has showcased some of the form that earned him a three-year, $4.8 million contract from the Bruins last year.

Bjork scored two goals and five points in 30 games with the Bruins earlier this season. He has already compiled three goals and six points with the Sabres.

“I’m climbing my way there but there’s still a lot to improve on personally,” Bjork said. “I’m just trying to get better every day with season winding down here but I’m trying to improve and build for the remainder of this year and then to hopefully carry that on into next year.

“Just trying to learn from the coaching staff and learn from the guys as well. There’s a lot of great hockey minds on this team, both young ones and older ones.”

After Granato moved Bjork up Monday, he was on the ice for Reinhart’s two third-period goals in the Sabres’ 4-2 win.

“It’s pretty easy to develop chemistry with those guys because they’re such skilled players and smart players,” Bjork said. “Reinhart has such an ability to slow the play down and make such solid, smart plays and uses his skill so well that it’s easy to read off him, and he puts the puck in such a great position.

“Luckily, we were able to capitalize some these past two games here.”

Notes: The Sabres, who had Wednesday off, haven’t won three straight games since Feb. 11 to 16, 2020. … Michael Houser, who will likely play again tonight, is the first Sabres goalie to win his first two starts since Mika Noronen on Oct. 5 and 7, 2000. … Granato switched Sabres rookie Dylan Cozens, who has played center for most of the past two months, to right wing Tuesday beside center Riley Sheahan and Arttu Ruotsalainen. Cozens, 20, began the season playing wing. … Winger Drake Caggiula’s assist on center Cody Eakin’s first-period goal Tuesday was his first point with the Sabres.