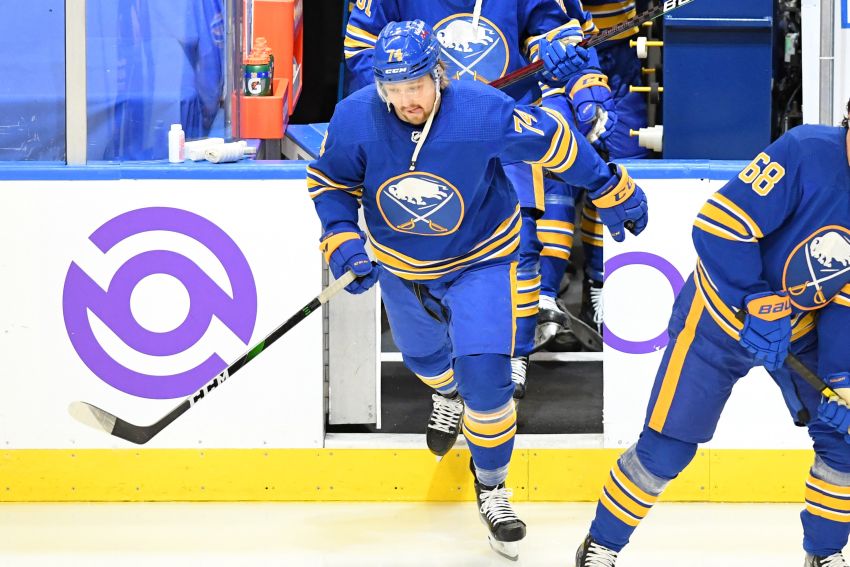 Sabres winger Rasmus Asplund targeted 2021 from the get-go. By his third season in North America, the Swede wanted to be ready to stick in Buffalo.

Sure enough, Asplund, 23, accomplished his goal, playing the final 21 games of the year under interim Sabres coach Don Granato.

Considering Asplund was a spare part until April, his emergence ranks as one of the season’s biggest surprises.

Yes, Asplund, one of Buffalo’s top-rated prospects, was expected to earn regular NHL duty someday. But he started the season on the taxi squad, playing only seven of the first 35 contests. He even returned to the Rochester Americans for a three-game stint.

Asplund spent the final month skating at left wing on a scoring line beside center Casey Mittelstadt and Tage Thompson.

“Everything went as planned,” Asplund said on a Zoom call May 7. “When I signed my three-year, entry-level (contract), it was the plan to be able to compete for a regular spot in the third year, which it is right now.”

Like his linemates, Asplund enjoyed a career-best stretch after Granato replaced Ralph Krueger, scoring six of his seven goals and 10 of his 11 points. He tied for fifth in goal scoring on the Sabres with winger Jeff Skinner, who played 25 more games.

Injuries and trades created an opportunity for Asplund, and he seized it, averaging about 15 minutes of ice time down the stretch.

“It’s the NHL, it’s the best league in the world, and to have this chance and opportunity that I have is just a blessing,” Asplund said of playing on a scoring line.

Asplund said the minutes Granato awarded him allowed him “to really show what type of player I am, what I can do out there, what situations I’m good at.”

“Hopefully I’ve been doing good enough to be a part of this for a long time because that’s what I want,” said Asplund, who needs to sign a new contract this offseason as a restricted free agent.

Asplund, a second-round pick in 2016, 33rd overall, has displayed consistent growth over the past three years. Having already played four pro seasons in the Swedish Hockey League, he arrived as a mature prospect.

He spent all of 2018-19 playing center with the Amerks, scoring 10 goals and 41 points in 75 games. He followed up by recording three goals and 19 points in 33 contests in 2019-20. He also earned his first recalls to Buffalo, compiling one goal and three points in 29 outings.

Asplund’s first taste of the NHL was difficult. He couldn’t let go of games and often had trouble falling asleep after them. So following the season, he worked on what he called his “mental game.” He said he now does mental exercises to help slow down his mind and “reset.”

“I grew a lot as a player in Roch, just understood how hard I need to work, what it takes to become an NHL player and when I got a taste of it last year, I really realized that it’s going to be hard work and (I need) to work on a lot of things to be able to reach my goal next year,” Asplund said. “I’m here right now and still trying to make my way here to become a regular.”

Asplund’s scoring exploits could certainly help him secure a regular spot next season. But in the future, he could be cast in more of a checking role, especially if the Sabres upgrade their forward corps.

“I see him as potentially a third-line player who can play both ends of the ice and chip in offensively,” said one scout who has watched Asplund throughout his career. “He can play in the top six for periods of time with his skill and sense.”

Asplund said the genesis of his offensive development can be traced to the defensive side.

“I just started to get comfortable enough in my defensive game that I feel comfortable enough to start doing my things offensively,” he said. “That’s a huge part of it and obviously Don’s been really, really good to me, getting a lot of minutes. That helps.”

Granato said Asplund has evolved and learned to score goals in different ways. What worked for him at lower levels won’t always help him in the big leagues.

“You’re in a different role and a different situation, but if you force turnovers, you have some extra details in your game, you’re going to create scoring chances,” Granato said. “I think that’s been Aspy to a T. He’s … progressively figured out and gained experience playing the game at this level and how to maybe create scoring chances, put the opposition in a tougher spot to create turnovers.

“And when you do that, you gain confidence, you recognize that turnover’s going to happen, so you’re ready for what happens after that, the scoring chance. And that’s what you see, that confidence, because he can predict and position himself for the next play. He’s built that, he’s going to continue to progress on that, so he has an exciting future in that regard.”