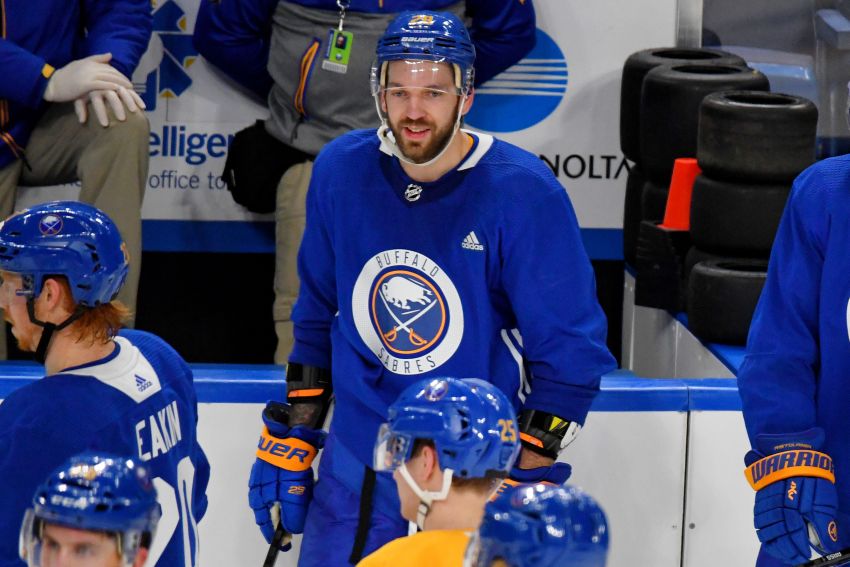 Zemgus Girgensons has been one of Buffalo’s few constants during a tumultuous era. ©2021, Micheline Veluvolu

As winger Zemgus Girgensons spends the next six months rehabbing after undergoing surgery to repair his hamstring, coach Ralph Krueger wants to keep him around the Sabres.

NHL teams often separate their injured players from the regular group. But Girgensons, 27, is such a popular teammate that Krueger feels the Latvian must have a presence during his long recovery.

Girgensons, whose work ethic is often lauded, will be difficult to replace. He has quietly developed into one of Buffalo’s top checkers and penalty killers. The Sabres think so highly of him they awarded him a three-year, $6.6 million contract in October.

“We all can feel the hole that Zemgus leaves with his injury – the character, the work ethic, the role that he has in our group is something that makes him unique,” Krueger said on a Zoom call. “I challenged the group today to chip in and to take a piece of that hole.”

Unless the Sabres enjoy a long playoff run or Girgensons heals quickly, his season is likely over after just three training camp practices and one scrimmage.

In the second period of Monday’s scrimmage, Girgensons eyed up forward  Steven Fogarty as he carried the puck and tried to hit him inside the blue line.

But Fogarty skated around him, forcing Girgensons to make a last-second adjustment. Girgensons’ legs split awkwardly as he attempted to find Fogarty and he fell to the KeyBank Center ice. Girgensons left the scrimmage and did not return.

“He’s a super important part of our team,” Sabres captain Jack Eichel said. “So it’s a big loss in our lineup but it’s a big loss personality-wise, because he brings a lot to our group on and off the ice. So we’re going miss him deeply. …

“It’s unfortunate that you lose him for as long as you do. You just feel for a guy like that that’s put so much work in. It seems like it’s taken away from him right before the season.”

Girgensons has been one of the Sabres’ few constants during a tumultuous era, playing 489 games. He and defenseman Rasmus Ristolainen, having both debuted in 2013-14, are their long longest-tenured players.

Last season, the Sabres’ first under Krueger, might’ve been Girgensons’ best. He scored 12 goals and quickly developed strong chemistry at left wing beside center Johan Larsson and Kyle Okposo. The line quietly morphed into perhaps the Sabres’ most reliable and one of the league’s top checking trios.

In the opening days of camp, Girgensons practiced at left wing beside newcomer Cody Eakin and Okposo.

With Girgensons gone, Krueger moved up newcomer Tobias Rieder, 27, with Eakin and Okposo. Krueger believes Okposo, 32, can demonstrate to Rieder the style the Sabres want to possess.

“Kyle Okposo and the way he’s embraced the principles that we are continuing to try to turn into habits – we have new players that need to walk into that space – is an amazing example of us on a daily basis that needs to be done,” Krueger said. “It is that way that he is a leader both on and off the ice and somebody that really is exemplary in executing the team game for us regularly and consistently last year.

“You can see the pair with Tobias Rieder today that we are confident that Toby could help be that kind of a player for us. We hope that Okie and Toby can find some synergy here quickly.”