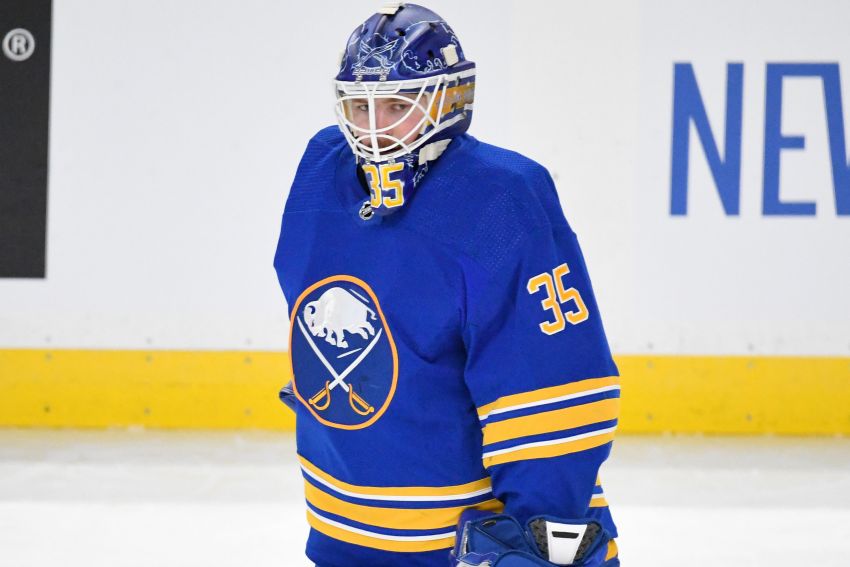 Kevyn Adams experienced a brutal rookie season as Buffalo Sabres general manager, overseeing a team that suffered through an 18-game winless skid and finished dead last in the NHL.

Trying to fix the Sabres, who have missed the playoffs a record-tying 10 consecutive seasons, could be an arduous task.

Adams’ short list for this offseason includes hiring a coach, trying to re-sign his No. 1 goalie and top scorer and making sure his captain and best player, Jack Eichel, is happy.

Interim coach Don Granato said following Saturday afternoon’s season finale he would talk to Adams on Sunday. The Sabres will be conducting exit interviews this week.

Twelve players are scheduled to hold Zoom calls with the media over the next two days. Eichel, who suffered a season-ending neck injury March 7, plans to talk Monday morning.

Adams and Granato are set to talk to the media Wednesday morning.

More on some of Adams’ top priorities this offseason:

Granato, 53, inherited a team in shambles from Ralph Krueger, who was mercifully fired March 17.

While it took time – the Sabres lost their first six games following the change – Granato’s promotion rejuvenated them. Incredibly, they finished the season on a 9-11-2 run. Remember, they finished 15-34-7 overall.

Granato coached the NHL’s youngest team down the stretch. In Saturday’s 1-0 loss to the Pittsburgh Penguins, for example, six rookies played for the Sabres. Their goalie, Michael Houser, was the sixth they’ve used this season.

Clearly, Granato, who started coaching in 1993, seized his opportunity.

He immediately improved the Sabres’ practice habits and installed an aggressive system the team embraced. He challenged young players who struggled or produced little under Krueger – defenseman Rasmus Dahlin and center Casey Mittelstadt, for example – and they morphed into some of the Sabres’ biggest contributors.

Bruce Boudreau, who has enjoyed regular-season success with three NHL teams, hasn’t coached since last season. Rod Brind’Amour, Adams’ ex-teammate, is reportedly working out an extension with the Carolina Hurricanes.

If Brind’Amour becomes a free agent, he would almost certainly be coveted.

But Granato, having already made notable progress in Buffalo, could be Adams’ best option.

Adams said last month Granato was in the mix for the job. He has also said he plans to talk to a lot of people.

The Sabres sorely need to re-sign Ullmark, who can become an unrestricted free agent.

Ullmark, 27, became the Sabres’ backbone and MVP. Despite backstopping the NHL’s worst team, the Swede compiled terrific numbers, going 9-6-3 with a 2.63 goals-against average and a .917 save percentage in 20 games.

After signing a one-year, $2.6 million contract last year, Ullmark will likely want a lucrative long-term deal. The Sabres, given they don’t have any other established goaltending options, might have to pay up.

Rookie goalie Ukko-Pekka Luukkonen, 22, looked impressive in his first four outings before a left leg injury ended his brief taste of the NHL. Still, Luukkonen, has played only 25 AHL games and needs more development time. It’s also unclear how long his injury will sideline him.

Reinhart, 25, signed a one-year, $5.2 million contract last year. After scoring 25 goals in 53 games, and with unrestricted free agency approaching after next season, he could earn a hefty long-term contract.

The Sabres also need to re-sign Dahlin and Mittelstadt, who can become restricted free agents.

Eichel, 24, endured the worst season of his six-year career in 2020-21, mustering just two goals and 18 points in 21 games before suffering a herniated disc in his neck.

When the Sabres announced in mid-April that Eichel’s season was over, they said he would be re-examined in early May.

The American never got on track during a lost campaign. He joined training camp late after injuring his ribs during an offseason workout, according to The Associated Press. He was clearly feeling the effects of the injury as he struggled for seven weeks.

While Eichel has expressed frustration over the constant losing – “I’m fed up,” he said a year ago – he has never publicly asked for a trade. The no-movement clause in his eight-year, $80 million contract kicks in after next season, according to capfriendly.com.