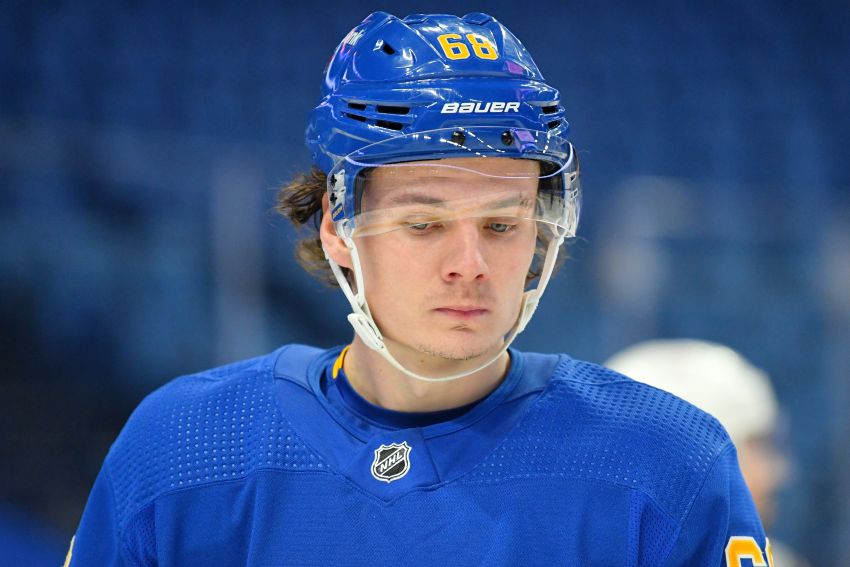 Victor Olofsson has scored just one goal in the last 14 games. ©2021, Micheline Veluvolu

Whether it’s the Swede’s behavior as he prepares for practice or his attentiveness during a conversation or a meeting, Granato said he sees a player “searching for the answer, searching for the direction within himself.”

He added: “He has an internal desire to become better.”

Olofsson, 25, has endured a rough sophomore season, compiling eight goals, 20 points and a wretched minus-17 rating in 30 games entering tonight’s contest against the Pittsburgh Penguins at PPG Paints Arena.

Like most of his teammates, he has generated little offense over the Sabres’ franchise-record 14-game losing streak, scoring just one goal in that awful stretch.

“It’s frustrating where we are at the moment,” Olofsson said. “For me too, I feel like I have a lot more to prove. Just offensively, I haven’t been good enough. I just try to focus on the next game and just trying to stay as positive as I can and work hard and focus on my experiences in the past, it’s always going to turn around if you work hard enough. That’s my mindset right now.”

Olofsson, of course, was supposed to showcase growth this season. He scored 20 goals and 42 points in 54 outings as a rookie, utilizing his quick release to burn goaltenders from the circle, especially on the power play.

That standout campaign earned him a two-year, $6.1 million contract.

But Olofsson hasn’t dispelled the belief he’s too one-dimensional. He has scored 19 of his 30 career NHL goals (63.3%) on the power play. He has recorded just two even-strength goals this season.

“The five-on-five game, I think I’ve kind of been struggling all year,” Olofsson said. “I’m just trying to get to those dirty areas and get some dirty goals and maybe some rebounds and some tips. Just trying to get those greasy goals is what I’ve got to do better.”

In addition to his five-on-five scoring struggles, he has become a defensive liability. His ghastly minus-17 was tied for the NHL’s fifth-worst rating entering Tuesday’s games.

Incredibly, the Sabres are so bad defensively that rating also ranks fifth on the team. Winger Taylor Hall (minus-18), center Eric Staal (minus-19), winger Sam Reinhart (minus-20) and defenseman Rasmus Dahlin (minus-28) have produced higher numbers.

In Monday’s 5-3 road loss to the New York Rangers, Olofsson played just 11 minutes, 44 seconds, a career low for a game in which he did not leave injured.

“The decisions that are made on the bench are made within a game, a single game, and then you move on,” Granato said. “So it’ll be different tomorrow.”

The Sabres’ inability to draw and convert power plays has added to Olofsson’s struggles.

On Feb. 27, having scored on 19 of their 55 opportunities (34.5%), the Sabres’ power play ranked first in the NHL. They haven’t scored a power-play goal in the 13 games since then. They’ve drawn only 21 chances over that stretch.

In six of those outings, the Sabres have had one or zero power plays.

“That makes a difference for sure,” Staal said of the lack of chances. “When you’re getting one, maybe two a game, it’s hard to generate momentum off the power play or get those Grade A chances, but with that I think it’s pretty obvious that we aren’t drawing enough power plays.

“We’re not playing with the puck enough on the attack or playing in the offensive zone enough to create those power-play opportunities. That’s all part of it.”

Granato said the power play can often “self-correct during a game” with multiple opportunities.

“The first power play, you see the players have a whole lot of anxiety and they press a little bit more throughout the league,” he said. ‘You get that one in and you tweak things and you can just take a deep breath and settle in. We haven’t enjoyed that luxury much lately.”