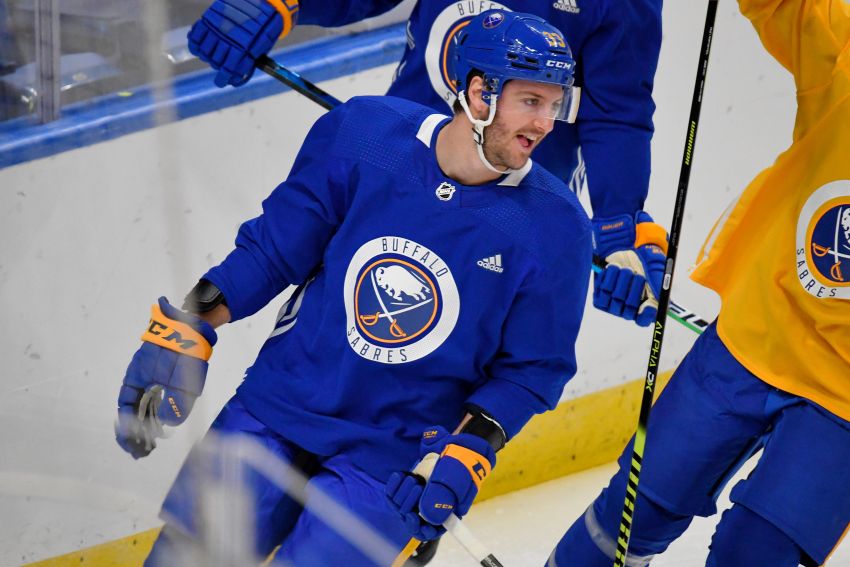 BUFFALO – Last year, his first with the Sabres, defenseman Colin Miller sat out 18 times – more than one-quarter of the season – as a healthy scratch.

The Sabres, who possessed a surfeit of defensemen, often dressed an extra one. Still, Miller regularly ranked eighth on the depth chart and was the odd man out.

This year, however, Miller, 28, has quickly earned a spot among the top-six defensemen. He skated beside Henri Jokiharju throughout training camp and was paired with the Finn for Thursday’s 6-4 loss to the Washington Capitals in the season opener at KeyBank Center.

The Sabres, of course, expected Miller would be a significant contributor a year ago. Fresh off two standout seasons, they traded second- and fifth-round picks to the Vegas Golden Knights in exchange for Miller, who enjoyed a 10-goal, 41-point campaign in 2017-18.

But Miller had trouble adjusting to the Sabres and coach Ralph Krueger’s system, and he started getting scratched six weeks into the season.

“He has adjusted and acclimatized completely to not only the area of Buffalo but also on the ice to the way we want to play,” Krueger said on a Zoom call prior to the game. “He’s getting used to the aggressive gapping style we expect from our defensemen while still adding to the offense, which he’s very good at.

“He’s got some upside on the attacking game, so what we like is his defensive commitment has continued to improve and his ability to understand what we need him to do within our group. He has earned this top-six start here and we look forward to seeing this next level of Colin Miller.”

Miller found a groove almost a year ago shortly before the COVID-19 pandemic ended the season, playing 16 straight games before getting scratched again.

When asked about that run, most of which he played beside Rasmus Dahlin, he couldn’t remember much.

“I don’t know, maybe a little more consistency playing with Ras,” Miller said prior to the game. “It was a long ways back now. … I’m more focused on this year now.”

This year, Krueger has switched Miller, a right-handed shot, to the left side. They have four righties, including Jokiharju, among their top-six defensemen, so one will have to play on his off side.

Miller played on the left side a little last season and before he arrived in Buffalo.

One pro has been an opportunity to stay beside Jokiharju, perhaps the Sabres’ biggest surprise last season, for the past two weeks.

“He’s definitely more sure of himself than he was last year,” Miller said.

Six of the seven defensemen on the roster played for the Sabres last season, with Matt Irwin, who was scratched Thursday, the only new addition. The stability and familiarity should help the defense corps.

“The more reps and the more time you get, obviously, the more comfortable you’re going to feel,” Miller said. “Last year, I think we had so many moving parts, and I’m sure it’ll be the same this year, because we have seven, eight defensemen on this team that can all play.”

Expect goalies Carter Hutton and Linus Ullmark to each play one game in the Sabres’ first two series.

“With the two back-to-backs coming up here, we are trending toward split games between the two of them,” Krueger said.

Notes: The Sabres played a video tribute prior to the game to honor legendary play-by-play man Rick Jeanneret’s 50 years broadcasting for the team. … With Okposo out, Sabres winger Sam Reinhart served as an alternate captain. … The Sabres had frontline workers introduce each player via video before the game.

This week’s “Behind the Bench” #Sabres analysis w/@NicholasLippa on @WBFO, 88.7 FM …

Thoughts on a wild offseason, the COVID NHL, getting out of the crowded East Division, reasons for optimism and more:https://t.co/e091SVi9rF pic.twitter.com/OAogq572XE