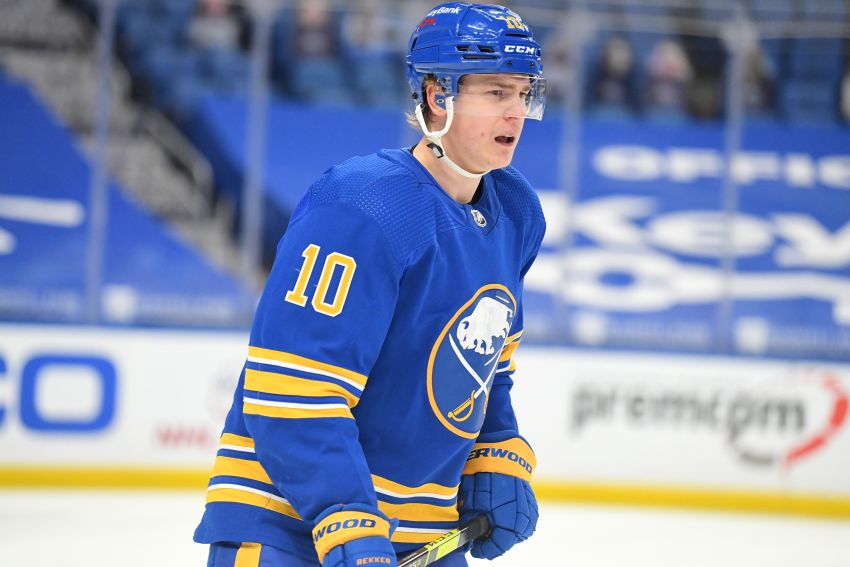 BUFFALO – Barely a year after Henri Jokiharju established himself as one of the Sabres’ top defensemen, he started struggling so badly he was demoted to the taxi squad.

Jokiharju, 21, sat out 10 games earlier this season. At times, he looked nothing like the steady defender from 2019-20.

But Jokiharju has settled down under interim Sabres coach Don Granato, showcasing more confidence beside Rasmus Dahlin, his partner over the last eight games.

“It’s so much easier to play,” Jokiharju said on a Zoom call this afternoon of skating with Dahlin. “We kind of read off each other, so I think both of us, we can play some better hockey. … I can have the puck a little bit more. We’re making plays out there and having fun.”

Why do Jokiharju and Dahlin, who has also rebuilt his game in the past few weeks, read off each other so easily?

“We talk a lot about what we want to do on the ice in different situations,” Jokiharju said. “So if the situation happens on the ice, we know how to react, of course. You got to react every time there’s a different play. But we kind of know already what the other player is thinking about.”

Jokiharju created a goal 53 seconds into Thursday’s 6-3 loss to the New Jersey Devils, carrying the puck into the zone before adroitly feeding winger Victor Olofsson in front from the right corner.

The Finn patiently waited for the play to develop.

“There’s no question he’s playing with more confidence and we’re seeing more of his skill as a result,” said Granato, who replaced Ralph Krueger on March 17. “The first goal was a beautiful play.”

Granato, having coached him as an assistant with the Chicago Blackhawks in 2018-19, the season before they both joined the Sabres, believed Jokiharju would adapt to his system and expectations.

“We talk with the experience of having that relationship in Chicago, which makes it easier even on the communication side for both of us and understanding,” he said. “So I feel that’s really helped, that trust and we’ve been in it together before. But he’s doing it, he is. He feels more comfortable, the game feels more comfortable, he’s reading things.

When Sabres promoted Granato, they also elevated Dan Girardi from a development coach to the assistant in charge of the defense to replace Steve Smith.