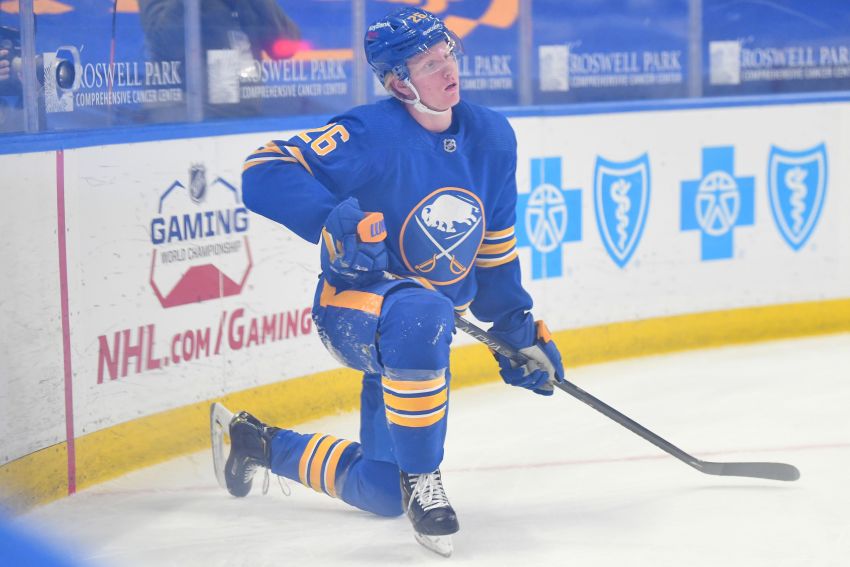 In his three-year career, Rasmus Dahlin has never experienced the NHL postseason. But in Tuesday’s 3-2 shootout loss to the Boston Bruins, the Buffalo Sabres defenseman received a taste of what heavy playoff hockey feels like.

“I haven’t been in a playoff game, but it didn’t feel like a regular-season game,” said Dahlin, whose goal 11:53 into the third period tied the game at 2.

Tuesday’s game inside TD Garden was the Sabres’ most physical this season.

“It was a really tough game, fast-paced and a lot of hitting,” Dahlin said on a Zoom call.

After a sloppy and timid start – the Sabres did not immediately respond to Nick Ritchie’s early hit from behind on Dahlin – they began matching the Bruins’ intensity.

“I love the way our teammates stuck up for each other,” interim Sabres coach Don Granato said.

Irwin and Thompson both lost their scraps. It did not matter. A message had been sent.

“We didn’t feel ourselves,” Granato said of the Sabres’ early play. “The game wasn’t easy for us. And yes, I think we responded not because I said anything, although we did speak of it. … I don’t think our guys were happy with the first period, I don’t think they were happy with how they felt, and they elevated. It was really nice to see. … The competitive level just rose.”

The Sabres play the Bruins, their East Division rival, five more times this season, including three straight games next week.

Dahlin, who turned 21 on Tuesday, can’t wait for the meetings.

“It’s fun to play like this,” he said. “Every battle means something. We all enjoy playing these games.”

The Sabres, who earned a point for the seventh time in nine games, lost goalie Linus Ullmark to a lower-body injury 4:54 into the game. Granato said he would not have an update on Ullmark until today at earliest.

Ullmark, the Sabres’ backbone, departed after going down to glove a shot from Mike Reilly. A lower-body injury recently sidelined Ullmark a month.

Dahlin’s dynamic goal – he dazzled with the puck inside the blue line before dancing around a defender and shooting – erased another late deficit, a recent trend.

Dahlin’s ability to battle through some rough moments impressed Granato.

“He wasn’t himself,” Granato said. “He wasn’t great. He lost some pucks, he made some plays he didn’t like through the early part of the game. But he stayed on it and he stayed ready to seize that moment and he found that moment.”

Winger Anders Bjork, who was acquired from the Bruins in Monday’s Taylor Hall trade, made his Sabres debut, skating 13 minutes, 55 seconds. Bjork assisted on defenseman Colin Miller’s goal 1:52 into the game and had a late chance to score on a two-on-one.

“Just a crazy 48 hours, for sure,” Bjork said. “It was kind of a whirlwind but I felt all right. I think I’ve got a lot more to show and can play a more complete game. Some of that’s learning the system a little better and getting to know the guys, my linemates.”

Hall and center Curtis Lazar, who was included in Monday’s trade, both made their Bruins debuts.