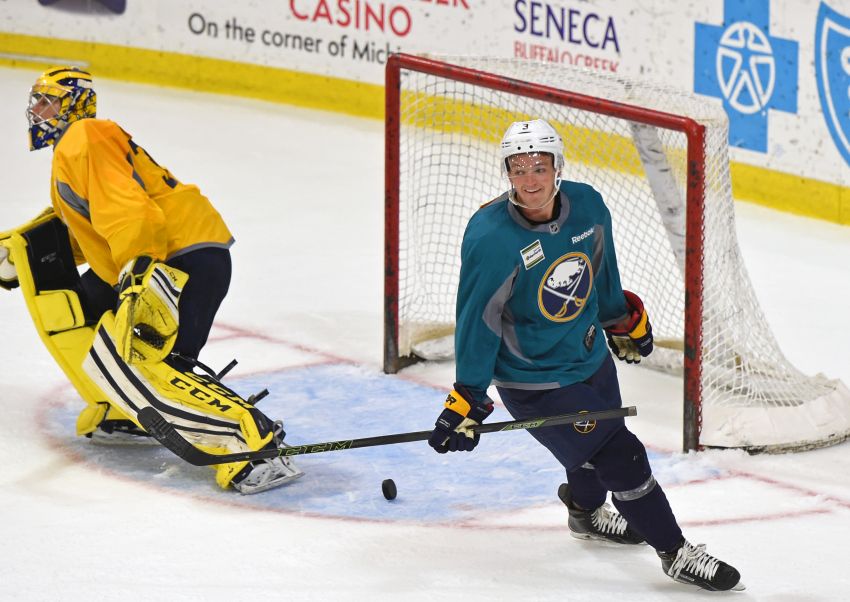 Will Borgen smiles after beating Steve Racine for a shootout goal that clinched a three-on-three tournament for his team Tuesday. ©2016, Dan Hickling, Olean Times Herald

“The scary thing for us, for everybody, was almost from the get-go he was ready to go,” St. Cloud State coach Bob Motzko said. “It was very early we knew we had something kind of special here.”

So did the decision-makers in charge of Team USA’s entry at the world junior championship. When they watched Borgen early on and talked to Motzko, the coach spoke honestly about his puck-moving defenseman.

Many freshmen acclimate to the NCAA slowly. Very few possess the maturity and talent to provide an immediate impact.

The 6-foot-2, 188-pound Borgen was accomplishing something rare at only 18 years old.

“He just kept getting better, and that was the story, that he became an integral part of our defensive corps,” Motzko said.

Borgen, the 92nd overall pick in 2015, played high school hockey in 2014-15 in Moorhead, Minn., although he spent 18 games in the junior United States Hockey League late in the season.

“It’s one of those things that comes around once in a while, young guy coming out of high school, all of us (wonder) what the acclimation period’s going to be,” Motzko said. “We knew we had a young, raw defenseman with tremendous athletic ability.”

“He can skate and he doesn’t tire,” Motzko said.

Borgen never experienced “a period of time where he struggled,” Motzko said. The U.S. chose him for its squad in Helsinki, Finland, an honor so special Borgen said “you can’t really explain it in words.”

“(He) played outstanding in the world junior then came back and had a terrific second half,” Motzko said. “I don’t know if somebody told him he was young and needed to be nervous, but that was not part of his makeup at all.”

Modesty, however, is in his makeup. Borgen, one of college hockey’s top freshmen in 2015-16, said he wasn’t sure if he “did anything special.”

“I just played my game and it ended up working out,” Borgen said Monday following a development camp session inside HarborCenter. “I was playing with good players.”

Borgen, of course, is still a work in progress. He had one goal, 14 points and a plus-17 rating in 37 games last season. Naturally, he wants to create more offense and hone a shot he said is “kind of weak right now.”

“There’s some little rawness to his game,” Motzko said, “but that’s the fun part with Will is (he has) got another level he’s going to hit as a hockey player now.”