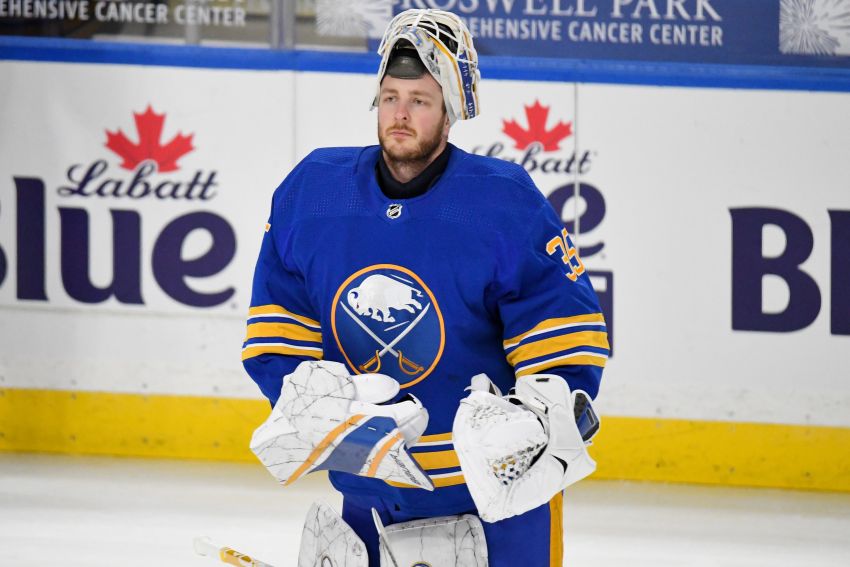 Linus Ullmark needed to talk. For the goalie, sharing his feelings was therapeutic. So coaches, teammates and anyone in the Buffalo Sabres’ bubble became his support system during an emotional season.

Ullmark’s wife, Moa, and their two children, stayed home in Sweden this year. When his father, Jan-Olof, passed away in January, he had to mourn his loss without the comfort of his family.

But at the rink, Ullmark found an outlet for his grief.

“I talked and I talked and I talked to different people that I feel the closest to, obviously not just my wife back home or my mom or whatever,” Ullmark said on an end-of-season Zoom call Monday. “If I didn’t talk to people and really make them understand how I felt during the day, that would have probably led to my doom, to my downfall.”

Ullmark would sometimes have brutally honest conversations with Mikes Bales, the Sabres’ assistant coach in charge of goalies.

Through all the pain Ullmark endured, he enjoyed his best NHL season, becoming the Sabres’ MVP. But the best part of the year, he said, was learning how much everyone in the organization cared about him.

Ullmark is grateful the Sabres simply let him be himself.

“I could have just kept it to myself and say everything is fine, but when you have people around you that sincerely … care about you, you can be honest and open with them,” he said. “That was the biggest reason that I was as open as I was, that I felt very safe and it didn’t take a lot of courage for me, honestly, to talk to them about it.”

Right now, Ullmark, who can become an unrestricted free agent, is looking forward to returning home and enjoying time with his family. He said a possible new contract with the Sabres will be discussed later.

“That is not my concern as of now,” he said. “For me, it’s just been taking it another foot in front of the other and just trying to pound away day after day.”

The Sabres sorely need to re-sign Ullmark, who will likely want a lucrative long-term contract. Top goalie prospect Ukko-Pekka Luukkonen, 22, will almost certainly return to the Rochester Americans for more seasoning. Dustin Tokarski, 31, the only other goalie with NHL experience under contract next season, just played his first big league games in more than five years.

Ullmark has consistently improved over his three full NHL seasons, morphing from a strong backup into the Sabres’ No. 1 goalie and backbone.

“He’s been phenomenal,” Sabres winger Kyle Okposo said. “He’s a … legitimate No. 1 goalie and he’s very good. He has really elevated his game in the last couple of years.”

“There was a calmness about our team knowing that he was back there, knowing that he was going to bail us out a few times, for sure, because he has that ability,” he said. “You just know going down in practice against him, it’s not easy to score on him, he’s just good. He took a lot of steps this year and (I’m) definitely hoping that he’s going to be putting on a Sabres sweater next year.”

Ullmark said he grabbed “a hold of that chance” when it materialized. His mental and physical development, of course, has been critical to his development.

“It kind of shows this season with everything that happened,” he said. “Also, I’ve played more games. … As a goaltender the more you play, the better you’re probably going to be because you’ve seen all the situations develop that you get a better read and understanding of what’s going to happen next.”

Ullmark would’ve played the majority of the games this season if he had remained healthy. He has battled injuries over the last two seasons, missing significant chunks of action.

“I’ve always felt that I’ve done the right things off the ice to prepare myself for what’s expected of me on the ice,” Ullmark said. “There’s a lot of circumstances surrounding it that might have increased the chance of me getting injured. We can’t know for sure what caused it. …

“Coming into this season … I came in with probably the best shape of my life. So I know it’s not because I was out of shape as it could be other times. So going forward, (I’m) just going to evaluate what happened, what muscles that I actually did injure, take care of them and then try to be more and more consistent with the work I put in in the offseason and then also during the season.”