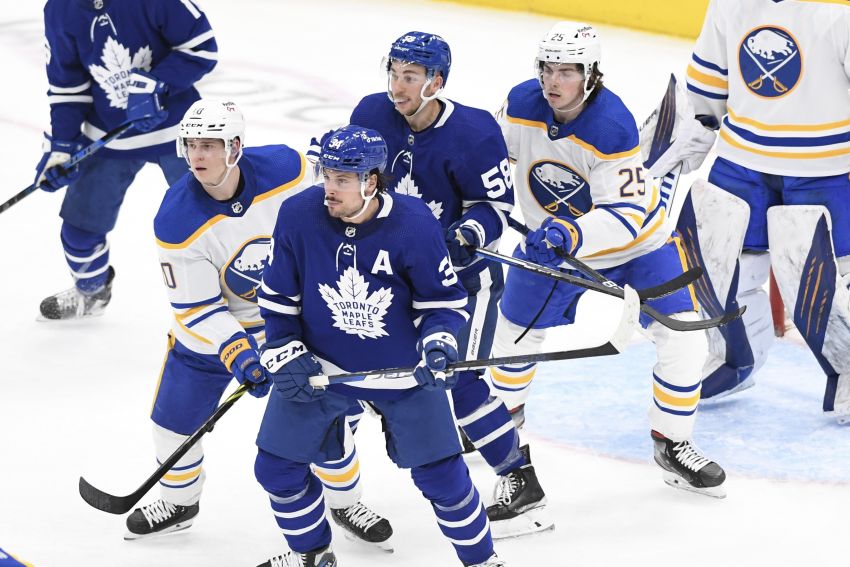 “It’s got to be the youngest D corps to ever step on the ice tonight, I feel like,” Tuch said after defenseman Owen Power, 19, made his NHL debut in Scotiabank Arena. “The oldest guy’s Casey Fitzgerald at 25.”

Incredibly, the average age of the Sabres’ defense in Tuesday’s contest was just 22. Jacob Bryson, 24, and Rasmus Dahlin, Henri Jokiharju and Mattias Samuelsson, all of whom are 22, also played.

The upstart Sabres, who host the St. Louis Blues tonight, have transformed their blue line during the last five months, infusing it with youth.

On Nov. 13, the Sabres utilized a defense corps of Bryson, Dahlin and veterans Will Butcher, Robert Hagg, Colin Miller and Mark Pysyk in their 5-4 loss to the Leafs. The average age of the defensemen that night was 26.

Power was still in college then. Jokiharju was injured. Rookies Fitzgerald and Samuelsson were with the Rochester Americans. Dahlin hadn’t yet reached the elite level he has consistently been showcasing since December.

“It’s really great to see, and this organization, especially defensively, has a really bright future.”

Power, the first overall pick in 2021, might have the brightest future of anyone in the Sabres’ arsenal. Coach Don Granato trusted him from the get-go Tuesday, putting him out for the opening faceoff against 58-goal scorer Matthews’ line.

“His hockey IQ kind of jumps out,” Matthews said of Power. “He’s not the flashiest guy out there but he looked solid, he looked like he obviously belonged out there. He didn’t look like a rookie playing in his first game. Just really steady.”

The Sabres, of course, want to put their neophytes in positions to succeed. Granato, for example, gave Power 63.6 percent of his even-strength starts in the offensive zone.

“We know the guys are going to learn from it,” Granato said. “So we want to get them against top players in key situations knowing that these are guys that are going to be here for a while. These are core guys for us and we know they’ll be able to acclimate.”

Expect to see Power approach or eclipse the 20-minute mark tonight during his debut at KeyBank Center.

Tuch said Power has quickly fit into what he said is “a pretty loose locker room.”

“We keep it light, but when it comes game time, we’re ready to go,” Tuch said. “… He’s a really nice kid, a little quiet so far. We’ll break him here shortly. No, he’s very professional. He comes in, he’s prepared to play. No one really had to tell him anything different.”

Ex-Sabres goalie Carter Hutton, whose rights were acquired by Toronto in February from the Arizona Coyotes, recently joined the Leafs and began working his way back from lower-body injuries.

Leafs coach Sheldon Keefe told reporters last week that if Hutton, 36, can play again this season, he would likely join their AHL affiliate in Toronto, the Marlies.

Hutton, who played 94 games for the Sabres over three seasons before signing with Arizona, watched Tuesday’s game from the press box.