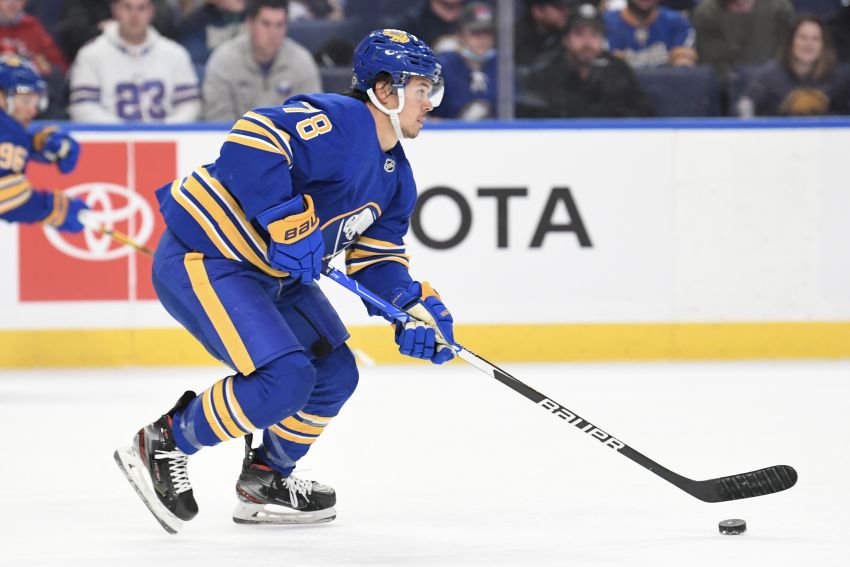 Getting scratched wasn’t a punishment for poor play. Granato simply wanted to utilize his entire blue line, so for a seven-game stretch, four defensemen – Bryson, Robert Hagg, Mark Pysyk and Mattias Samuelsson – moved in an out.

When Bryson, 24, sat out Feb. 10, he tried to use a rare night off to his advantage as he watched the Sabres’ 4-3 overtime loss to the Columbus Blue Jackets.

“You take a step back and watch a game from above from a new perspective,” Bryson said following Thursday’s practice at KeyBank Center.

Since sitting out that night, Bryson has been one of the Sabres’ steadiest defenders, averaging 19 minutes, 21 seconds of ice time over the last nine games entering tonight’s home contest against the Minnesota Wild.

In Wednesday’s 5-1 road win over the Toronto Maple Leafs, a game he played beside top defenseman Rasmus Dahlin, Bryson’s power-play goal, his first tally this season, opened the scoring. He also played more than 20 minutes for the fourth time in five games.

“The opportunity to step back doesn’t mean you stop internalizing,” Granato of Bryson getting scratched. “You internalize different things that you add. I think that happened with Jacob when he was skipped over again here recently because he’s come back and every game has been good, better.

“He was struggling a little bit more with that consistency at that point prior.”

The scratch last month wasn’t the first time the 5-foot-9, 175-pound Bryson seized an opportunity to watch a game.

In 2019-20, ex-Rochester Americans coach Chris Taylor sat out Bryson once so the rookie could study the action from the press box. When he returned, his development accelerated, and by the end of the season he appeared destined for Buffalo.

“It’s happened twice now and I think both times … I’ve come back a lot stronger,” Bryson said. “You sit out and it’s kind of more of a competition when you come back that you’re fighting for a spot and you don’t want to let another guy steal your spot. So it’s good to sit up there and watch it from a different point of view, which you don’t get to throughout the season. …

“I don’t want to say I loved doing it, but I think it did help both times. It’s made me a better player.”

So what’s recently changed in Bryson’s game? Granato said the Providence College product, a youngster he called a “talented, evasive guy,” has been excelling on the defensive side.

“Just simple taking pucks back, positioning himself to take pucks back, kill plays quicker, kill plays sooner,” Granato said. “He’s starting to grasp, ‘How can I kill plays with my skill set?’ And he’s enjoying that component of the game as much as the offensive component, and it gives him more offensive time because he’s becoming better and better at that.”

On Wednesday, Bryson and Dahlin often made the Auston Matthews and John Tavares lines non-factors.

Bryson said given his size, he needs to have a strong stick and the proper gap while defending.

“I’m not going to win too many players battles with big guys, I just know that,” he said.

Bryson also knows he must shoot the puck more frequently. His goal was first shot on goal in four games. In 46 games this season, he has registered just 30 shots, the lowest total among regular Sabres defensemen.

His shot that beat goalie Petr Mrazek just 2:26 into Wednesday’s was a simple wrister from the point that deflected in off Toronto defenseman Morgan Rielly.

“Getting pucks to the net, it’s an important trait of defensemen,” said Bryson, a left-handed shot who has been playing the right side for the first time. “It’s tough to do, get it past that first shot blocker. … With my game, I need to shoot the puck a lot more. It generates a lot of chances and rebounds and it gives you O-zone time.”

Granato said his defensemen must get more wrist shots on net.

“The goal (Bryson) scored last night, he snapped it quick it enough, it bounces off their defenseman and the goalie has no chance at it,” he said. “We’re leaving a lot of goals on the table other teams are scoring doing that, we don’t do that enough, in my estimation. So for Brys, yes, we want him to shoot more.”

Sabres defenseman Colin Miller, out the last 18 games, practiced in a non-contact role Thursday for the first time since undergoing surgery in mid-January to repair an upper-body injury.

Miller, 29, doesn’t know when he can play again.

“There’s still a lot of things on my personal checklist that I want to make sure I feel before I feel I get out there and I’m able to play a game again,” he said. “So still a little bit of time.”

Miller tried playing through his injury before it became too much.

“It was bothering me probably for about a month and a half,” he said. “It wasn’t getting better and I wasn’t really able to move how I wanted to.”