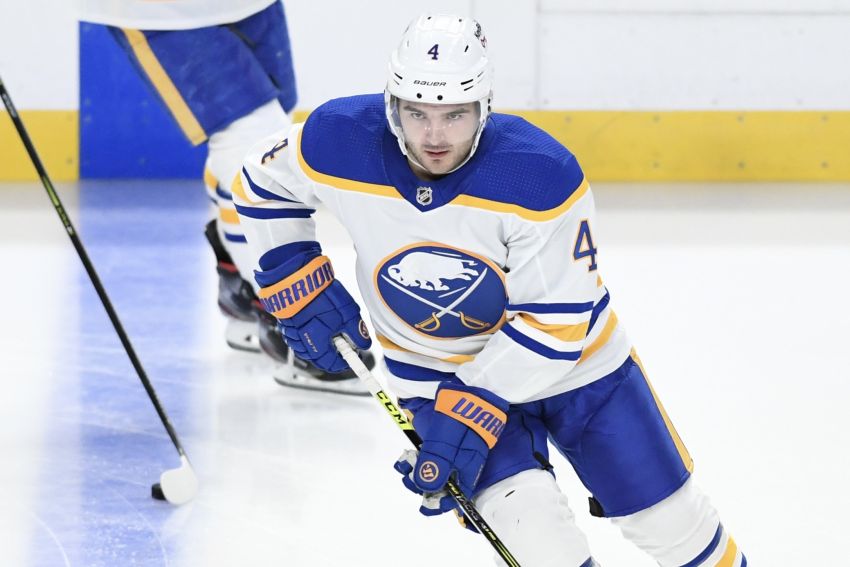 Will Butcher could enjoy a leading role in Buffalo. ©2021, Micheline Veluvolu

BUFFALO – Adrenaline and excitement buoyed defenseman Will Butcher through his season debut. In his first outing in nearly five months, the Sabres ran the newcomer ragged, skating him more than 28 minutes.

While Butcher, 26, said he felt fine during Tuesday’s 5-4 shootout win over the Columbus Blue Jackets, the heavy workload caught up with him later.

“Yeah, it was a lot of minutes,” Butcher said following Wednesday’s sessions of training camp inside KeyBank Center. “It didn’t feel like that in the moment, but today I was hurting a little bit. But I felt good. I think I got better as the game went on.”

Butcher, having lost his regular spot with the New Jersey Devils last season, craved an opportunity like he received Tuesday. He was so excited for camp that Sabres coach Don Granato said he recently told him he would play every exhibition game.

“He comes in with a hunger,” Granato said.

“I want to get out there,” Butcher said. “I just feel if I get more used, the better I’m going to be for the season.”

Butcher’s decision-making was so sharp Tuesday that Granato said he stood out among the established talent the Sabres dressed for their preseason opener.

“We had other experienced players – (Anders Bjork), Vinnie Hinostroza and (Zemgus) Girgensons – using that game as a gauge,” said Granato, whose Sabres play a road game tonight against the Detroit Red Wings. “I could see those guys aren’t close to where they can be in another three days, a week or a month. Yet, Will was making plays as if he was already in midseason form.”

Butcher is beginning a critical season. If he can recapture his early-career form – he averaged five goals and 37 points over his first two years – then he will likely generate interest as an unrestricted free agent next summer.

The American endured such a rough season in 2020-21 the Devils essentially gifted him to the Sabres on July 28 to clear $3.73 million in salary cap space. Officially, they “traded” him and a fifth-round pick in exchange for the future considerations.

Butcher lost his spot early last season and never regained it under new Devils coach Lindy Ruff. He sat out the first nine games as a healthy scratch and played only 23 of the 56 contests, compiling one goal and 11 points.

“It was a combination of everything,” Butcher said of losing his spot. “They had some younger guys come in, play well, a new regime change, maybe a different outlook on what I brought to the team or didn’t bring to the team and just kind of how the chips fell during camp.

“I didn’t have a bad camp by any means, but I could have had a better camp last year and I think that kind of put me in a hole.”

Sitting out games, of course, was difficult. Butcher had never experienced getting scratched.

He jumped straight to the NHL in 2017 following a dynamic senior season at Denver in which he won the Hobey Baker Award. He made an immediate impact in 2017-18, registering 44 points and earning a spot on the NHL All-Rookie Team.

“It’s tough,” Butcher said of getting scratched. “It’s a new learning experience. I just tried to take it in stride, be a good teammate and help out when I could. When I got the games, put my best foot forward.”

As Tuesday’s game illustrated, the rebuilding Sabres offer Butcher a fresh chance to reignite his career. In addition to having an opportunity to seize a leading role on the blue line – veterans Rasmus Ristolainen and Jake McCabe departed during the offseason – Butcher knows Granato well.

Prior to his college career, Butcher spent his final junior season in 2012-13 with Granato at the U.S. National Team Development Program. Butcher believes the aggressive style Granato likes to play meshes well with his talents.

“Relentless puck pressure,” Butcher said of what Granato expects. “Playing hard. And then just staying detailed. Those are kind of his three big hits he always talks about all the time. I like to pride myself on a lot of that stuff.”