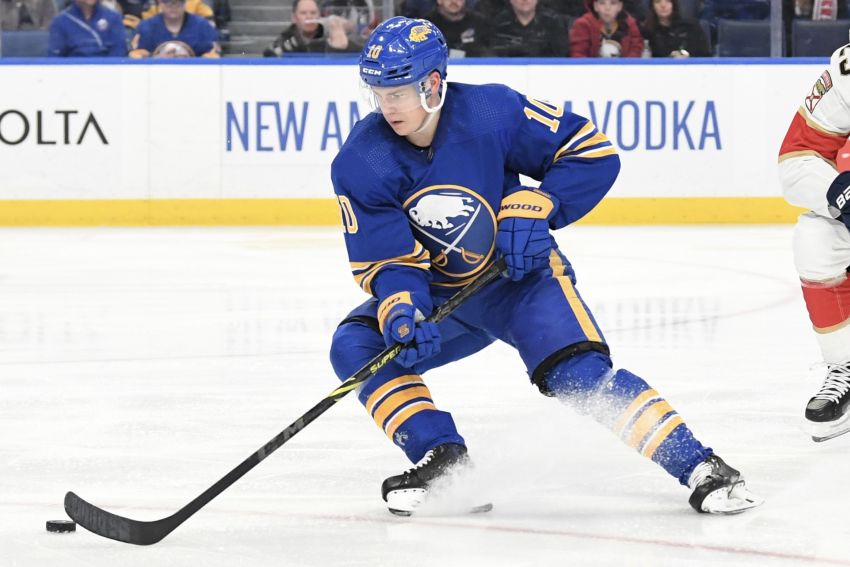 TORONTO – Prior to Owen Power’s arrival, Buffalo Sabres defensemen Rasmus Dahlin and Henri Jokiharju both let it be known they’d love to play with the rookie, the first overall pick in 2021.

The problem? Well, Dahlin and Jokiharju were partners at the time.

In the end, Granato chose the right-handed Jokiharju as the lefty Power’s first partner. They’ll skate together tonight in Power’s NHL debut against the Maple Leafs at Scotiabank Arena.

Why did Granato choose Jokiharju, 22, for the plum assignment?

“Joki’s a right shot and he did a nice job with Dahlin,” Granato said. “He settles things down. His personality is a fit. Joki is much like Dahls. It’s nice when you have two young guys like Jokiharju and Dahlin and they already feel like big brothers.”

Power, 19, said he watched Jokiharju play for the Chicago Blackhawks a few years ago when he was in junior hockey with the Chicago Steel.

With Jokiharju beside Power, Granato partnered Dahlin with Mattias Samuelsson. Dahlin, a lefty, skated on the right side, a spot he often played in Sweden.

“Before I came to (the Sabres) I was a right D,” Dahlin said. “There’s more upside to the offense on the right side, I feel like.”

Dahlin’s good friend, Sabres goalie prospect Erik Portillo, will be returning to Michigan for his junior season, according to Sportsnet.

“It’s his decision, I won’t get into that,” Dahlin said of the fellow Swede. “I mean, obviously, he had a great year this year. I’m excited for his future. He’s a great dude.”

If Portillo, 21, turned pro, he likely could’ve been the Rochester Americans’ starter next season. Another Sabres goalie prospect, Devon Levi, will be returning to Northeastern for his junior year.

Notes: Power, who hails from nearby Mississauga, Ontario, said he “grew up” at Ford Performance Centre, which is about 20 minutes away. … Power doesn’t know how many family members and friends will be at tonight’s game. “I think there’ll be a lot,” he said. “I got my mom on duty for that. I don’t know the exact number.” … Sabres center Cody Eakin, who missed Sunday afternoon’s 5-0 road loss to the Tampa Bay Lightning with an undisclosed injury, practiced Monday. Granato said Eakin “will be a question mark” for tonight’s game. Wingers Anders Bjork replaced Eakin on Sunday, ending a streak of 17 consecutive scratches. … Leafs star Auston Matthews, whose 58 goals lead the NHL, has scored once in three games against the Sabres this season.