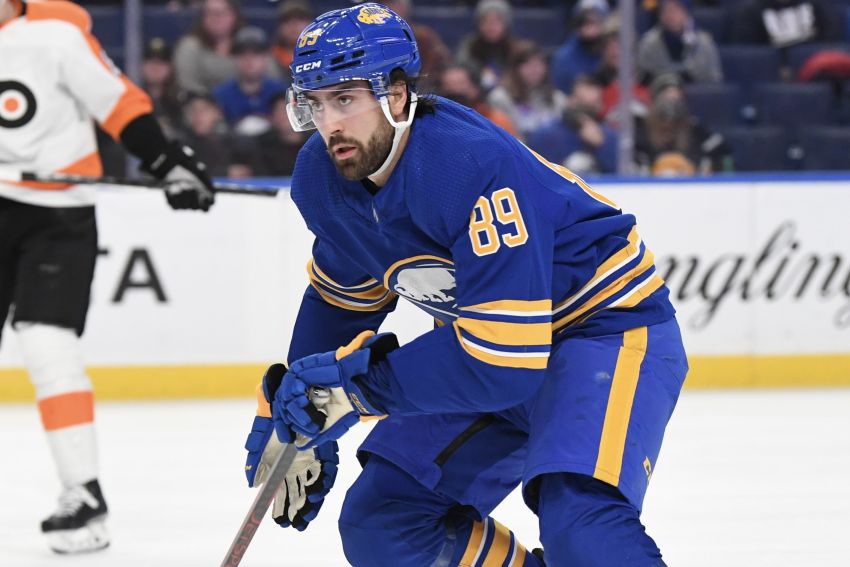 Newcomer Alex Tuch is off to one of the best starts in Buffalo’s history. ©2022, Micheline Veluvolu

Tuch, 25, could blend in as a second- or third-liner for the Golden Knights, a team built to win the Stanley Cup right now.

“All the pressure that’s on that team to win and go for the Cup, it was typically on other players in the organization and it tiered down to him somewhere in that depth chart,” Sabres coach Don Granato said following Friday’s practice inside LECOM Harborcenter.

So Granato said he has challenged Tuch. With the rebuilding Sabres, the winger has quickly become one of the guys, shouldering more expectations and responsibilities.

Tuch has been skating on the top line beside center Tage Thompson and Jeff Skinner, killing penalties and playing more than 19 minutes a game, the most of his career.

“Here he’s at the top of the depth chart, it’s a different type of pressure, and I think he’s starting to recognize that and handle that,” Granato said after the Sabres prepared for tonight’s road contest against the Arizona Coyotes.

The affable Tuch, one of the assets the Sabres acquired Nov. 4 in the Jack Eichel trade, sounds energized by his fresh opportunities and hellbent on seizing them.

“I’m always going to be grateful for my time in Vegas,” Tuch said. “I … really want to embrace this opportunity and try to take the next step in my career, and I’ve been given an unbelievable opportunity here, come play with some really talented players.”

He added: “I’d like to think that I haven’t even come close to reaching my ceiling.”

Tuesday’s 5-0 road loss to the Ottawa Senators, Tuch’s 10th appearance with the Sabres, was just the third game in which he did not record a point. The Baldwinsville native’s torrid offensive start ranks among the best in franchise history.

In his first nine outings, Tuch registered three goals and 10 points. Only three other Sabres – Doug Gilmour (13 points), Pat LaFontaine (11 points) and Steve Heinze (11 points) – have produced more points in their first nine games after arriving in a trade.

Tuch grew up a rabid Sabres fan and has often spoken about how joining the team has fulfilled a childhood dream. So to be mentioned among players like LaFontaine, a Hockey Hall of Famer whose No. 16 hangs from a KeyBank Center rafters, is special.

“It’s really cool to be talked about and have, yeah, a guy like Pat LaFontaine even near you in any sort of stats at all,” Tuch said.

Still, Tuch, who made his season debut Dec. 29 after recovering from offseason shoulder surgery, downplayed his point total. In Tuch’s 10 games, the Sabres have compiled just a 3-5-2 record.

“I’m more worried about wins and trying to be better each and every day,” he said.

Having compiled 64 goals and 149 points in 265 career NHL games, the 6-foot-4, 217-pound Tuch has established himself as a scorer. He said his new opportunities can help him develop into a more versatile threat.

“It’s not only offensively; I’m trying to become a more diversified player, a more well-rounded player,” he said.

While Tuch said he killed penalties for the Golden Knights, he often skated on their third forward pairing. These days, he plays on the Sabres’ first or second pairing.

“It helps you stay in the game, keep your legs going and keep pushing,” Tuch said. “So as soon as we’re back five-on-five or even power play, you’re really going, you’re really feeling the puck. That’s really helped.”

“You really have to be on your toes and you really have to be ready to see a lot of skill and a lot of really good plays and try to read,” he said. “I think it helps my offensive game, too, because then I see these plays that guys are making right in front of my face. Instead of watching and trying it, you’re almost trying to divert it and you know how to honestly, make it your own.”