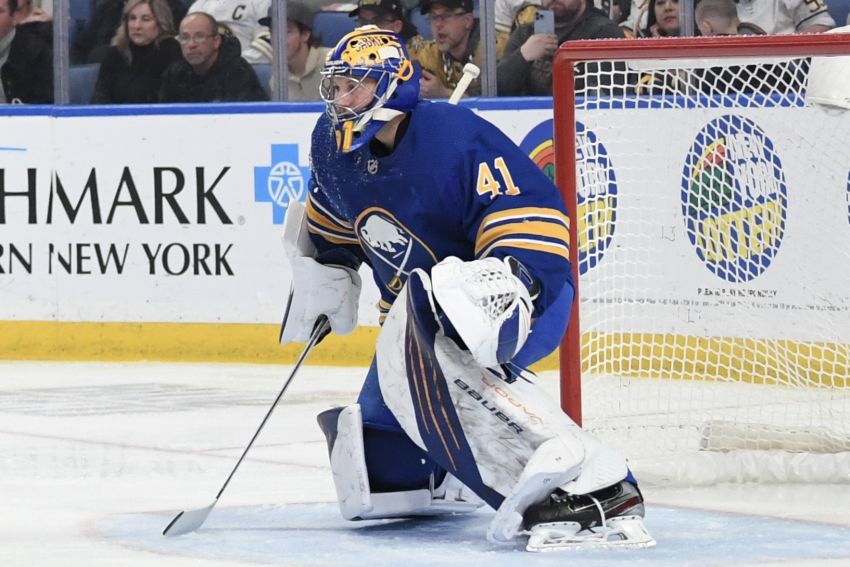 If the Sabres dealt him to a contender – Florida, where he has a home, appeared to be the likeliest destination – he would’ve embraced a background role. Having spent much of last season on the Washington Capitals’ taxi squad, he knows how to handle the difficult job as the second or third netminder.

Staying put meant Anderson, 40, could continue as the Sabres’ starter and finish his 19th NHL season with a group of players with whom he has grown close to over the past seven months.

Ultimately, the Sabres kept Anderson and several other free-agents-to-be. A team that has showcased growth while winning four of its last five games will remain intact.

“If something made sense, it would’ve been done,” Anderson said of the Sabres moving him before Monday’s deadline. “But at the same time, I’m 50-50 on it, right?”

Anderson said if the Sabres had traded him, the Panthers would’ve been his preference.

In addition to his family being in Florida, the Panthers have morphed into one of the NHL’s heavyweights. Rejoining them – he spent three seasons in Florida earlier in his career – might’ve given him a crack at the Stanley Cup.

In Sergei Bobrovsky, 33, and Spencer Knight, 20, the Panthers have a two-time Vezina Trophy winner and one of the league’s best young goalies. Anderson, of course, could’ve provided some valuable insurance.

“I would’ve been able to go home and potentially do something deep into the playoffs and be a part of something,” said Anderson, who will start tonight’s game against the Pittsburgh Penguins at KeyBank Center. “But also I’m glad to be here as well, to be a part of this growth we have right now. So I think the big thing is stay in the moment, we’re here right now, we’re here in the moment. This is the job, the focus at hand.

“And I think at the end of the day, the Buffalo Sabres want me as their goaltender right now. I think that emotionally is reassuring. So I’m going to be enthusiastic about it.”

The Sabres are so enthusiastic about Anderson – both his on-ice play and impact in the dressing room – they could be interested in re-signing him. The American inked a one-year, $750,000 contract prior to the season.

“He’s been a solid guy for us and a stabilizing guy,” Sabres coach Don Granato said following’s Tuesday’s practice. “We’ve had ups and downs, like every team. He’s walked the walk. So when he talks it, there’s a presence there. And he speaks the right way. He speaks and you see and feel the foundation of ups and downs. It’s not you feel the foundation when he speaks that everything in his career has been great. It’s more the opposite. He’s been under very unstable situations and he’s got through it and it’s made him stronger.”

Still, the NHL’s oldest goalie has been the Sabres’ backbone. If an upper-body injury hadn’t sidelined him nearly three months, they might’ve won five or six more times during that stretch.

After more than two decades in pro hockey, Anderson’s play hasn’t dipped much. He can likely play next season if he wants to.

But retirement is clearly under consideration.

“My love for the game is undeniable,” Anderson said. “But, selfishly, my family has to come first and I’ve put them on the back burner for several years now. So that’s going to be a family decision where we have to really sit down and have a long conversation and figure out what makes the most sense as far as from a group.

“Selfishly, I would love to continue to play and continue to love and play the game. I go out there every day and enjoy it. As long as I’m enjoying it, I feel like I want to keep doing it. And right now, I’m playing at a level where I’m still feeling I’m competitive and I can still contribute.

“The day that I can’t contribute is probably the day I realize that, selfishly, I can’t play anymore. I don’t know when that day is. That day might be in 30 days, it might be in 300 days.”

Anderson will be honored prior to tonight’s game for his 300th NHL win, an achievement he earned March 10 in the Sabres’ 3-1 victory over the Vegas Golden Knights.

The way Granato and his teammates rallied around his pursuit of the milestone was special for Anderson.

“Donny brought it up quite often, so the guys, I felt, put that team-first mentality and said, ‘Hey, let’s do this for him,’” Anderson said. “And the next guy does something for the next guy. … (That) kind of mentality is something that’s kind of spilling over on everybody, and that’s a good thing to have.”

Anderson said he “felt that Donny wanted to get to 300 more than I did.”

“That says everything to me, that he’s got that much character,” he said. “The players that he has around, I think he’s shown that to all the guys that are in that room.”