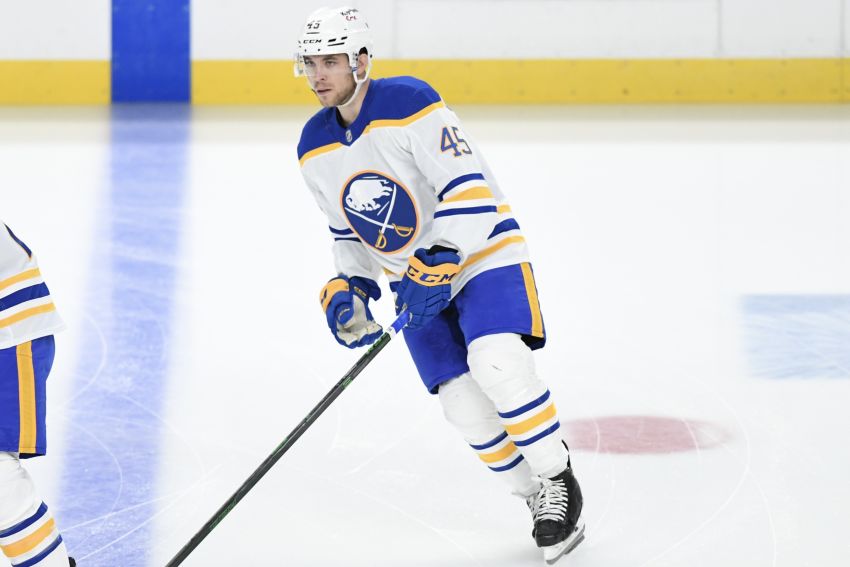 Casey Fitzgerald made his NHL debut for Buffalo against Pittsburgh, the team he grew up cheering for. ©2021, Micheline Veluvolu

Throughout the day, Kerry acknowledged she was a “nervous wreck” waiting for Casey, 24, to make his NHL debut at PPG Paints Arena in Pittsburgh. But after the puck dropped against the Penguins, she said it felt like watching any hockey game.

Then about five minutes into the second period, Casey took umbrage with Lafferty’s hit on Sabres winger Vinnie Hinostroza – “It was a little bit leg-on-leg,” the rookie said following the game – and made the winger pay for it.

Kerry couldn’t believe 5-foot-11 Casey was furiously unleashing lefts and rights. “Oh my God, when did Casey become a fighter?” she thought to herself. Part of her felt excited for him and the other part was nervous.

“Especially at the very end, his helmet popped off,” Kerry told the Times Herald on Monday.

That’s when the linesmen broke up the fight and the television broadcast quickly cut to Kerry and her husband, Tom, the New Jersey Devils’ general manager, in their seats.

A stunned-looking Kerry was nervously rubbing her chin. Then she put her hands on her chest, showing her relief. In the seat next to her, a smiling Tom was applauding the scrap.

“I hope she didn’t get to see too much,” Casey said of the fight.

Not surprisingly, video of the fight and his parents’ reaction went viral.

“Now it’s hilarious because my friends are sending me TikTok videos, and I was like, ‘I’m not even on TikTok!” Kerry said. “No, I did not know that cameras were on us. I had no way of knowing. It’s kind of funny to look at. I was getting a lot of texts from friends at home. They’re like, ‘Oh my God.’”

She said in the moments after the fight, Tom felt like a “pretty proud papa.”

Still, Tom who fought just seven times in his 1,097-game NHL career, according to hockeyfights.com, was nervous watching Casey fight.

“You don’t know how those things are going to end,” he told the Times Herald on Tuesday. “One punch, you’re down, you’re concussed. You can get hurt. Like I told Casey, I don’t want him fighting. But fighting’s part of the game unfortunately still.

“It’s OK when you stick up for your teammates like he did. I thought that was a moment where, huh, this is going to go a long way.”

He added: “I was proud of the fact that he didn’t like the way his teammate was hit and went over and addressed it.”

“That’s how you build culture, a good culture, and expectations and standards in that culture are protecting teammates at all costs and you stick together,” Tom said. “It can galvanize a group.”

On Friday, it helped galvanize the Sabres, who erased a 2-0 deficit before losing 3-2 in overtime.

Things got a little heated in Pittsburgh and Casey Fitzgerald’s mom wasn’t loving it. 😂🥊 pic.twitter.com/eldiCRFWZK

Despite some uneasy moments during Casey’s fight, the Fitzgeralds, of course, enjoyed what Tom called “just an incredible, incredible night.”

“So grateful for them, just everything they’ve done for me my whole life and leading me up to … this part of my career, it’s very special,” Casey said.

When Casey took a solo lap prior to warm-ups, a tradition for someone playing their first game, Kerry said she had a tear in her eye.

“I was trying my best not to crack a smile there but that was surreal,” Casey said of the lap.

Prior to joining New Jersey, Tom spent nine years in Pittsburgh’s front office. The Fitzgeralds’ four sons grew up rooting for the Penguins.

After the Penguins won the Stanley Cup in 2009, Casey swam in owner Mario Lemieux’s pool with superstar Sidney Crosby. During his visits to Pittsburgh, assistant coach Todd Reirden would break down video of defensemen with Casey.

“They were my team growing up,” Casey said of the Penguins.

Following Friday’s game, Reirden texted Tom and told him he couldn’t believe he had just coached against the same kid he used to help.

Casey’s favorite player was defenseman Kris Letang, whose posters adorned his bedroom wall. When Casey joined the U.S. National Team Development Program as a teenager, he wore No. 58 because of Letang.

On Friday, Sabres coach Don Granato put Casey in the starting lineup, so when Kerry looked out at the ice during the national anthem, she saw her son standing across from Crosby and Letang.

“I’m thinking, ‘This is just like too good to be true,’” she said. “I mean, he literally grew up idolizing Kris Letang. … I looked at my husband, I go, ‘Are you kidding me? This is insane.’ So that was pretty cool.”

The Sabres on Monday sent Casey, who also recorded an assist, back to the Rochester Americans after just one appearance. After the COVID-19/Christmas break ends Sunday, they could recall him again.

Whatever happens, he should earn another look soon.

“Casey definitely earned the opportunity to play one game,” Tom said, “and I think he knocked the door down taking advantage of that opportunity, that’s for sure.”

Solo lap for Casey Fitzgerald (@CaseyFitz97) ahead of his NHL debut! 🙌 pic.twitter.com/Gai8JBYNMF