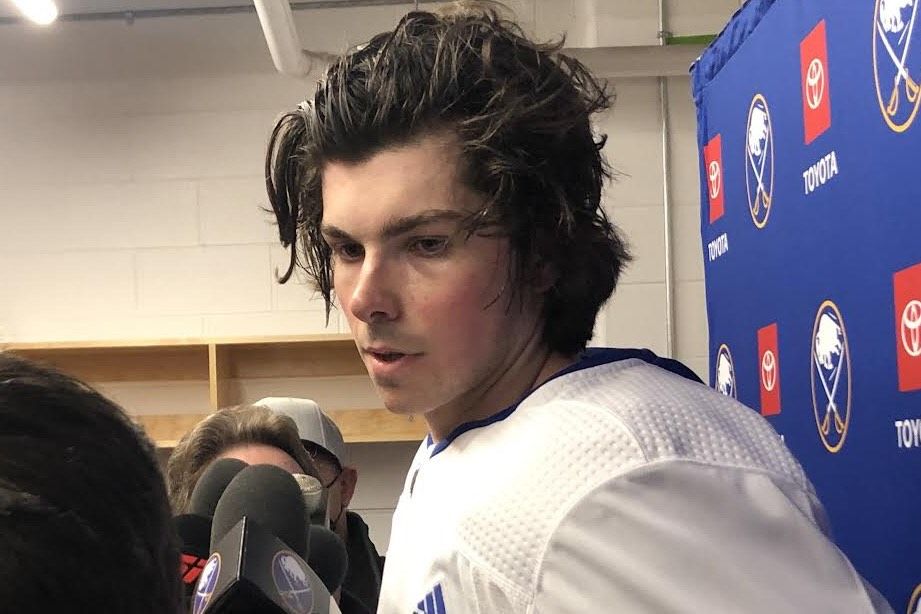 TORONTO – No one understands the lofty expectations and accompanying pressure Buffalo Sabres rookie Owen Power must deal with better than Rasmus Dahlin.

Having also been drafted first overall, Dahlin possesses unique insight into the highs and lows and Power, 19, will endure as a young NHL defenseman.

“He’s a young kid, he’s here to learn,” Dahlin said of Power, who will be making his NHL debut tonight against the Maple Leafs at Scotiabank Arena. “It takes time, so that’s going to be my advice to him, it takes time. Just let him be who he is and let him develop. So no rush.”

Dahlin, who turns 22 on Wednesday, knows from firsthand experience the rigors of that development process. After enjoying dynamic success early in his career, he struggled mightily before morphing into an NHL All-Star this season.

“He’s someone who has been through kind of same experience, so I think he’s someone I could really lean on and just try and ask him any question I can and just learn from him,” Power told a throng of reporters following Monday’s practice at Ford Performance Centre, his first in the NHL.

Sabres coach Don Granato said Dahlin can have a “huge, huge impact” on Power, the top pick in 2021.

“We have lots of guys who are excited that Owen is here, but I think Dahls has gained a lot of experience that he’s excited to share,” Granato said. “Dahls is a guy that cares about his teammates and team. He is absolutely a team-first guy. Rasmus Dahlin is amazing, the team-first attitude he has. It’s just an instinctive attitude.

“He has been talking about Owen and his arrival for some time before this week. Excited to meet Owen, to be around Owen and you can see that.”

Everyone seems to be excited to be around Power, who signed his entry-level contract Friday, a day after his season at Michigan ended.

At the end of Monday’s practice, winger Vinnie Hinostroza pushed Power, a native of nearby Mississauga, Ontario, into center ice to lead the stretch around his teammates. The Sabres then saluted him by banging their sticks on the ice for about a minute.

“It was pretty funny,” said Power, whose parents, Zee and Trish, watched the session. “It was all fun.”

He added: “Everyone’s been so welcoming and so nice to me. They’re always trying to include me in everything. I think they’ve done a great job making it easy for me to kind of come in and adjust.”

A simple action like acknowledging Power’s arrival underscores the tight-knit group the Sabres have become this season.

“Nobody has to be the savior,” Granato said. “This group is going to do it together and they’re building together. You can see the camaraderie and the passion that they have for each other and to put that jersey on. It’s fun to be a part of as a coach. You guys who were all in the building saw the stick banging when Owen went in there and you could just see a group of 20-some guys just completely immersed in themselves and nothing else. In the moment. That’s fun to watch as a coach.”

Joining a new team is nothing new for the 6-foot-6, 213-pound Power. He has played for a whopping five – Michigan, Team Canada at the World Championship, World Juniors and Olympics and now the Sabres – in less than a year.

“If you think about how many teams he’s been on the last two years, and the pressure he’s had on him, or the hype he’s had on him for the last two years, it just rolls off of him,” Granato said. “He handles it pretty well, especially when he puts his hockey gear on. Off the ice, standing here could be different, but when these guys get in the locker room and they put their gear on, they’re in their element.

“They’ve done this their whole life. They’ve dreamt about it, they’ve visualized it hundreds of times, so it’s pretty darn natural for them.”

Still, jumping from college to the NHL with the benefit of just one practice isn’t easy. Power also participated in the Sabres’ optional pregame skate prior to Sunday afternoon’s 5-0 road loss to the Tampa Bay Lightning.

“We haven’t thrown a lot of information (on) Owen,” Granato said. “I don’t want information overload. Even systems, you look through the National Hockey League, we’re all playing 85 percent the same system. These guys know how to play games, so we don’t want to throw a lot at him. We haven’t.

“We’ll let him absorb it at his own rate. Practice was big to get him in practice to see how we practice and play. Certain points of emphasis we have. But it’s all going to come sort of organically.”