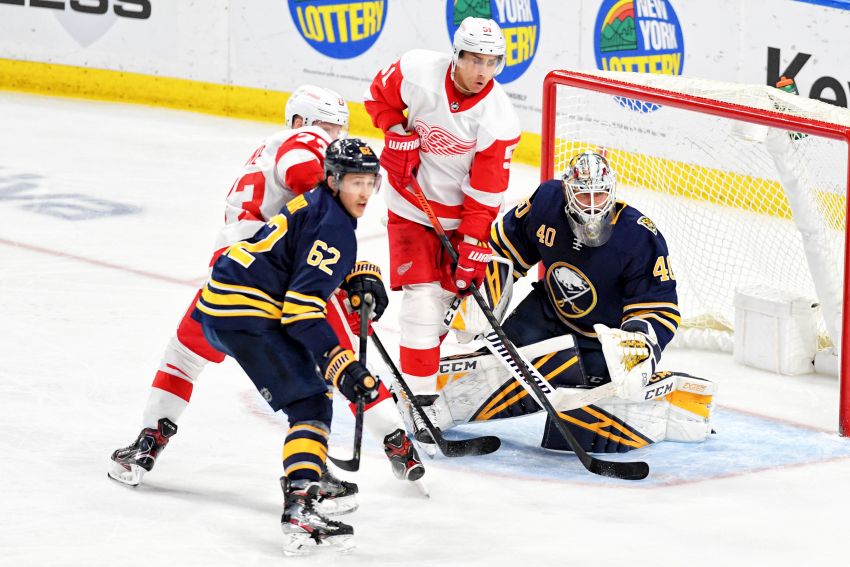 Hutton struggled for months, losing the No. 1 job and 13 straight starts. Before Linus Ullmark suffered a lower-body injury, he had become a spare part, only playing when the Sabres had back-to-back games.

But in the last week, Hutton, 34, has began showcasing the early-season form that helped him win his first six appearances.

In Tuesday’s 3-2 win over the Detroit, Hutton looked sharp late, stopping some prime chances the Red Wings generated while the Sabres had a power play.

For the first time since October, Hutton has won two straight starts. He was also one of the Sabres’ top performers in Friday’s 3-2 road win against the New York Rangers, making 37 saves.

Hutton said he is “just back to playing my game.”

“I had to work on some things and obviously just sticking with it,” Hutton said after making 27 saves Tuesday. “Nothing really changed, like I’ve talked about it a little bit here, I started the year really strong and I had some stuff go on that I worked through.”

Sabres winger Marcus Johansson said Hutton stood “on his head and made some huge saves and kept us in the game.”

“Hutts has been unbelievable for us,” said Johansson, who ended a 14-game goal drought and enjoyed his first two-point contest since Dec. 31, the last time he scored. “I think it feels just because we lose a game or two it’s like everything falls on the goalies or whatever it is, and that’s not the case. I think he’s been playing unbelievable. Some games it just hasn’t really bounced his way.”

Hutton’s best stop came with 2:07 left in the third and the Sabres clinging to the one-goal lead winger Sam Reinhart gave them earlier in the period. Red Wings center Dylan Larkin got a step on defenseman Rasmus Ristolainen short-handed and zoomed in before Hutton thwarted him.

“But I think ideally we’d like to lock that two minutes down a little better than give up some chances.”

While the Red Wings are often competitive – they beat the heavyweight Boston Bruins 3-1 on Sunday – they’ve won 14 games all season.

The Sabres, as they have regularly at home over the past two weeks, started slowly before the crowd of 16,588, letting Darren Helm score the first of his two goals 27 seconds into the contest.

After Sheary missed the net on a penalty shot and Helm scored again, Johansson wired a lethal wrist shot in from the right circle past goalie Jonathan Bernier.

“We’ve been struggling here at home lately so the confidence level isn’t extremely high,” Sabres coach Ralph Krueger said. “I think going down 1-0, getting it back quick, going 2-1 and sticking with our plan and staying calm on the bench and getting that one back, grinding it out, that was that kind of game.”

Johansson, a natural winger, has played center regularly this season for the first time since his rookie year in 2010-11. He looked comfortable back at left wing, displaying some immediate chemistry beside Sheary and center Curtis Lazar.

“Maybe I get (in) a little more situations than I’m used to, and where I’m used to having the puck and having plays,” Johansson said of playing wing.

Johansson, who had a strong start this season, has often spoken about his struggles and how he hasn’t felt like himself. He said Tuesday’s outing was “at least a little step in the right direction.”

“Marcus was certainly freed from his defensive responsibility,” Krueger said of the position switch.

Hutton said of Johansson: “He’s a guy that’s been working at it, fighting it a bit at times. He’s … one of the favorites in this room here. It was a big night for him.”

Sabres captain Jack Eichel reached the 70-point mark with his assist on Reinhart’s goal, becoming the 14th Sabre to hit the mark in back-to-back seasons.

He added: “It cut him underneath the eye and around the nose. Basically it was a large facial laceration in the nose area.”