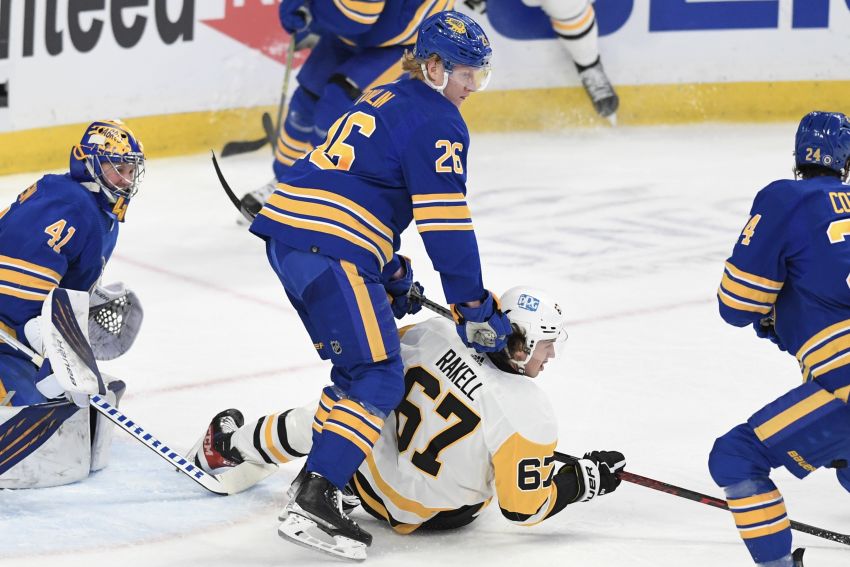 BUFFALO – It just happens sometimes, Rasmus Dahlin explained. The ultra-competitive defenseman has no real explanation for it. In the heat of the game, with his adrenaline pumping, he stands ups on the bench, leans over and yells to his Sabres teammates.

“Doesn’t it feel good to compete? Feels good to compete!” Sabres coach Don Granato said Dahlin has shouted. “(He does it) after a guy has a hard shift or he feels guys need to be harder. He’s emerged in more ways than just what you might see on TV or watching him.”

Over the past four months, Dahlin, who turns 22 on April 13, has emerged as one of the NHL’s most dynamic young defensemen. In his fourth season, fresh off a nightmare campaign in 2020-21, he has rapidly started realizing his enormous potential.

The more mature, vocal Dahlin – the one who feels comfortable challenging his teammates – is a byproduct of the confidence he has generated.

Since Granato took over a year ago, that competitiveness has been unlocked. Granato said when he began working more closely with Dahlin, the youngster would make “a very conscious effort to do the right thing.” He did not want to disappoint anyone.

Granato told Dahlin to ditch that conservative mentality and “get after it.” He wouldn’t disappoint anybody.

“I felt there was a real competitive burn there I needed to help him unleash where he wasn’t worried about any repercussion from me or what I think, potentially negative,” Granato said after the Sabres prepared for tonight’s home game against the Washington Capitals. “Just go.”

When Dahlin embraced that aggressive attitude, his play took off, and he has morphed into the Sabres’ most consistent and versatile threat.

In Sunday’s 3-2 overtime win against the Vancouver Canucks, Dahlin was arguably the best player on the ice. He buzzed around the offensive zone all night, and it felt like he would eventually score.

Sure enough, 48 seconds into overtime, Dahlin grabbed winger Alex Tuch’s pass in the right circle, moved into the slot and scored.

“I’m watching the game (Sunday), I got excited just with what we’re seeing in his development and where his game is,” Sabres general manager Kevyn Adams said Monday.” I’m also thinking, like, he’s 21 years old still. He has an opportunity to keep getting better, keep pushing.

“And then for me is the type of kid he is, and that’s the type of people we want in the organization, ones that are here because they really believe in something that we’re going to do here is special, and then they want to get better.”

Granato’s support and Dahlin’s burgeoning belief in his array of talents has unleashed an elite, attacking player. Meanwhile, he has also become one of the team’s most influential voices.

Dahlin acknowledged he has become comfortable in a leadership role this season.

“The last three years or whatever I haven’t really shown my real self,” Dahlin said. “Now I’m really starting to show who I actually am. I hate losing. I hate when stuff doesn’t go my way and that’s who I am. I’m getting more comfortable, so I guess I’m showing another side of myself, too.”

Granato said: “He is a leader, a big-time leader in this group. He is extremely vocal and very aware of momentum and momentum shifts and swings. He challenges his teammates as hard as anybody.

So when something needs to be said, Dahlin, who has sometimes worn an ‘A’ as an alternate captain this season, will say it.

“When I feel I want to say something, I say something, but it’s not like I’m a guy that screams, you know?” Dahlin said. “But close games, I want to push the guys. We’ve got other guys in the locker room that push guys, too. I think you have to do that. You have to know where the momentum swings are and when you think you have it you’ve got to push the guys and try to do everything we can to win.”

The Sabres have been winning all month, compiling a 7-3-0 record. Tonight they’ll be gunning for their first four-game winning streak since winning 10 straight contests from Nov. 8 to 27, 2018. They’ve won five of their last six outings.

Dahlin, of course, has helped buoy the Sabres’ best run in years. In Wednesday’s 4-3 shootout victory over the Pittsburgh Penguins, he played a game-high 28 minutes, 6 seconds.

“All they’re doing is getting him in the game more,” Granato said. “I mean, this guy, you go after him, he is going to go after you hard. There’s no doubt. If you reflect on games, he reengages intensely and immediately follows up. You’ve stoked the fire in him. He’s going to go at you for the next 48 minutes or whatever’s left in the game and raise that level, raise that bar. …

“That is something that needs to be at the forefront of his game for his sake, because he loves it, he loves to compete.”

2 thoughts on “Rasmus Dahlin becoming vocal leader for Sabres: ‘Showing another side’”