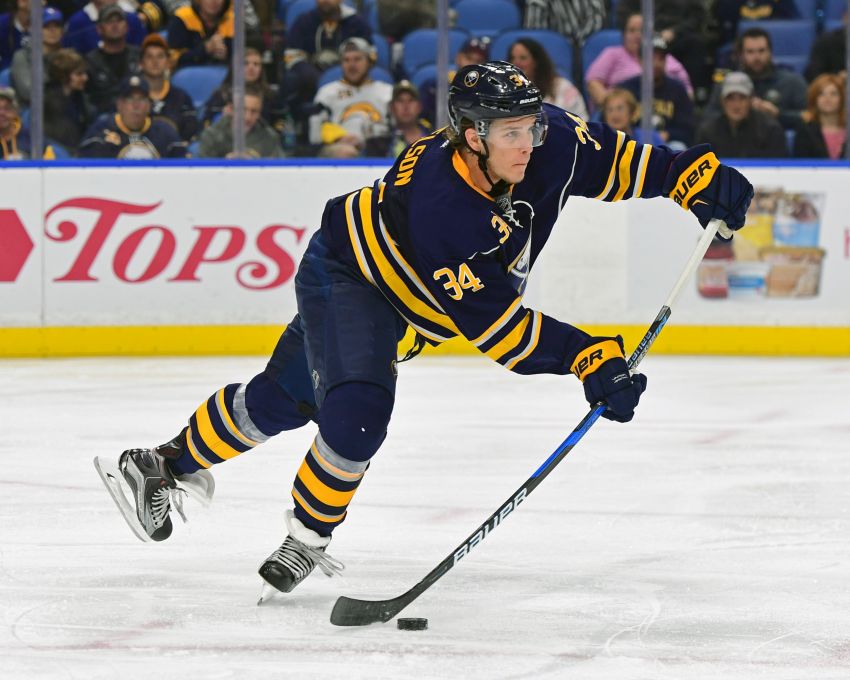 BUFFALO – The blue line has been set for three months. When Dmitry Kulikov arrived via a trade at the NHL Draft, the Sabres had their sixth and final piece, a physical, puck-moving defenseman capable of playing top-pair minutes.

So barring an injury, a Rasmus Ristolainen contract problem or a very impressive training camp from a depth defender, the Sabres have their opening-night lineup: Kulikov, Ristolainen, Zach Bogosian, Cody Franson, Josh Gorges and Jake McCabe.

But what about that seventh defense spot? Given the rugged nature of the position, depth is critical. The Sabres don’t have much, either, especially since they passed on re-signing veteran Carlo Colaiacovo.

Right now, journeyman Justin Falk and rookie Casey Nelson, who played seven games after leaving college in March, are battling for the final spot. Coach Dan Bylsma has said it’s unlikely the Sabres will carry eight defensemen like they did last season.

Falk, 27, and Nelson, 24, both played in Friday’s ugly 8-1 preseason loss to the Toronto Maple Leafs before an announced crowd of 17,866 fans inside KeyBank Center. Nelson endured a rough night, compiling a wretched minus-5 rating.

Falk could have an edge given he’s played 171 NHL games and Nelson’s a neophyte who needs playing time. Instead of scratching him, the Sabres might want Nelson to develop and play big minutes in the AHL.

Still, Nelson, a free agent from Minnesota State, is a prospect they’re high on. Bylsma didn’t rule out Nelson forcing his way into the lineup like McCabe did last season.

“He looks like kind of a commanding guy back on the blue line,” Bylsma said Friday morning. “He’s shown he can defend well with his skating and his presence, also kind of a quarterback, kind of a puck-moving guy that controls the play.

After returning to school following last season, Nelson spent most of the summer training in Buffalo.

“(I) left eager to get back on the grind … because I know I have to get a lot better,” Nelson said. “I still do. I feel like I made some big steps this summer.”

The 6-foot-1 Nelson said he added about 15 pounds – the Sabres list him at 190 – during the offseason. Now he feels more comfortable in his body and on the ice.

“I feel more in position defensively, just a little weight off my shoulders there,” he said. “I just feel more comfortable back in my zone.”

Falk, who has also played for the Minnesota Wild (twice), Columbus Blue Jackets and New York Rangers, said he had never signed a contract so early. He knows he’s lucky to have an opportunity.

“At my age, opportunities are going to be coming fewer and fewer trying to make a push to get games in this league and hopefully get a spot and reestablish a full-time NHL job,” Falk said. “It’s hard to do.”

At his best, Falk, the tallest player on the roster, can be difficult to play against.

“I just try to be big, steady and reliable,” he said. “Getting some experience under my belt, I just want to get quality minutes, however many that be or when that be, just (be) a guy they can rely on.”

Bylsma said: “To this point, he’s a steady guy, a bigger guy, he’s a guy that can be hard to play against.”

Falk understands he could be assigned to the Rochester Americans. He’s used to shuttling between the minors and the big league. He has spent at least a portion of the season in the AHL four of the last seven years. He said Rochester’s close proximity to Buffalo played a role in choosing the Sabres.

“The last few years I’m popping up and down six, seven, eight times a year it seems like,” Falk said.

Sabres goalie Robin Lehner, Friday’s scheduled starter, missed the tilt with a forearm contusion the team said isn’t serious. Jason Kasdorf started in his place and was relieved by John Muse after allowing four goals on 13 shots in the first period.

Bylsma said Lehner took a shot on the elbow Thursday.

“Just felt like it was something we didn’t need to have him play through,” he said.

Kulikov left the game with a bruised backside after getting hit into the bench door. Bylsma didn’t sound concerned the injury would sideline the Russian long. Winger Nick Baptiste, meanwhile, left the contest with a lower-back injury. Bylsma didn’t have an update.

Center Derek Grant scored the Sabres’ only goal. The Leafs scored seven unanswered goals after he tied it in the first period.

“That was an opportunity for them to compete and earn a spot, possibility of earning a spot,” Bylsma said. “They didn’t do that.”

With Kulikov, who debuted Friday, and center Jack Eichel back from the World Cup of Hockey, only center Ryan O’Reilly is missing. Team Canada won the tournament Thursday, so O’Reilly will return soon.

“I wouldn’t be surprised if Ryan showed up tonight or showed up tomorrow morning,” Bylsma said.