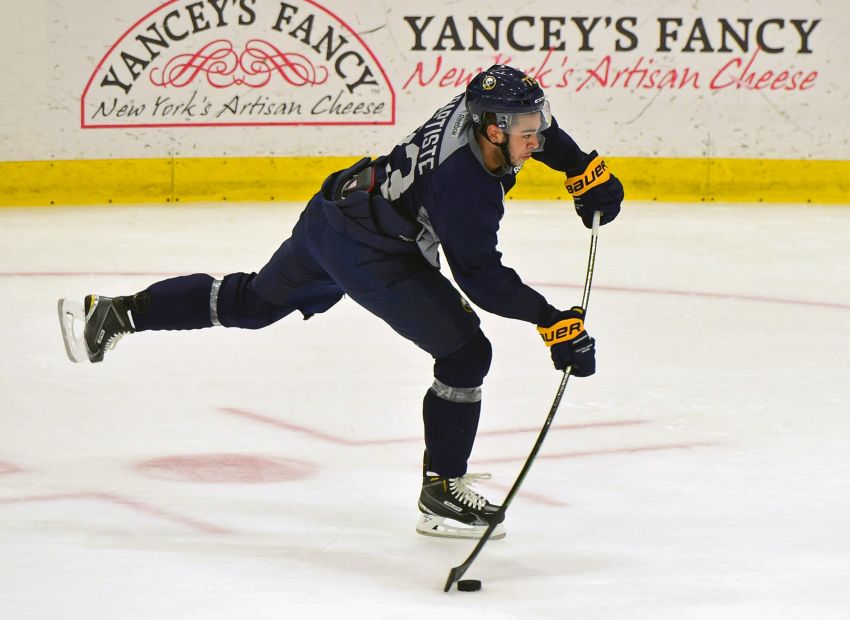 For two years, Baptiste, 21, was quietly one of the Ontario Hockey League’s most lethal scorers, earning invites to Team Canada’s world junior camp. By the time Baptiste turned pro last year, he had morphed into one of the Sabres’ top forward prospects, a distinction he still holds.

Baptiste’s first AHL campaign, while hardly dazzling, was still solid. His 13 goals (in only 62 games) put him in a three-way tie for second on a weak Amerks team. His 28 points ranked eighth.

Still, Baptiste, who missed more than a month with a knee injury, never seemed to be in line for a recall.

“He was a typical first-year guy, you maybe at times think it’s going to be a little bit easier than it is,” said Amerks coach Dan Lambert, a Buffalo assistant last season. “The American League’s a really good league, and there’s not many guys that come from junior … that step into the league and rip it up.”

Baptiste has a fresh chance to impress the Sabres tonight against the New Jersey Devils in the first of two Prospects Challenge games. As a rookie camp veteran, the team probably expects Baptiste, the 69th overall pick in 2013, to stand out and make an impact.

At his best, the 6-foot-1, 206-pound Baptiste is a hard-nosed scorer, modeling himself after Anaheim’s Ryan Kesler and Philadelphia’s Wayne Simmonds.

While many junior scorers struggle to adapt to the defensive demands of pro hockey, Baptiste believes he developed defensively last season and can be a checker and a scorer.

“I think my game is both,” he said. “It starts with being physical and fast and getting to the net, and then I think as the game goes on scoring (opportunities) open up for me. I think when I’m playing like that my offense comes, and that’s where I score goals.”

Like a lot of AHL rookies, Baptiste struggled early on, scoring only once in his first 14 outings. He had two goals in four games when he hurt his knee Jan. 9.

Baptiste developed in other ways, learning from former Sabres Matt Ellis and Patrick Kaleta. The veterans taught him to practice like he’s playing a game and how to carry himself and be a pro off the ice.

Given he missed 14 games and still scored 13 goals, Baptiste, a year wiser, should improve offensively. He has no goal total in mind, however.

“I don’t want to set a goal, because I think if I’m playing the way I need to and on a consistent basis, the sky’s the limit,” Baptiste said. “I can score as many goals as I’m fortunate to get the opportunities for. I don’t want to put a cap on it or shoot too high.”