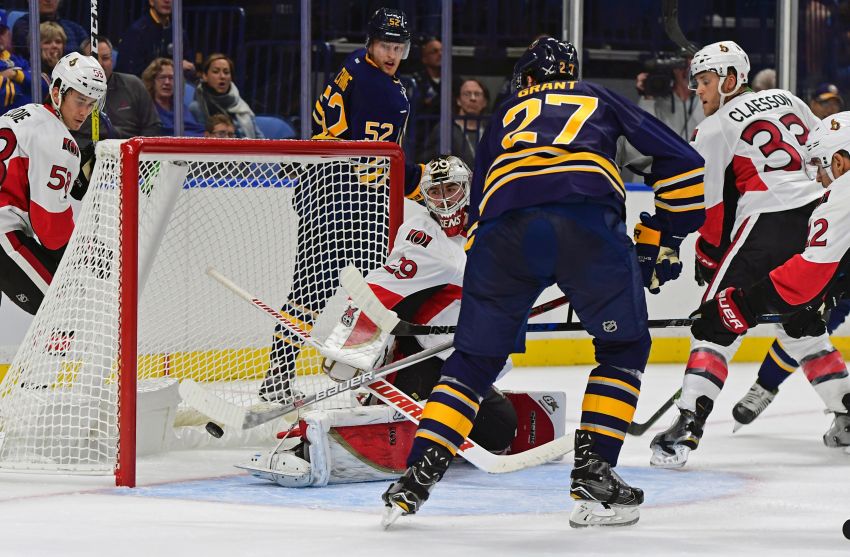 BUFFALO – Forget that the Sabres rallied to beat the Ottawa Senators 3-2 in Tuesday’s preseason home opener. Forget that they did it in spectacular fashion, tying it late before defenseman Jake McCabe scored a nifty overtime winner.

Individual efforts often matter the most during exhibition contests, and the Sabres received some strong performances, led by center Derek Grant’s one-goal, three-point night and No. 1 goalie Robin Lehner’s 37-save outing.

Grant tied it at 2 with 4:41 left in regulation, fed McCabe in front in OT and created Nick Baptiste’s second-period goal by hitting the streaking winger perfectly as he zoomed to the net.

Yes, it’s still early in training camp, but Grant, 26, a high-scoring AHL star with 40 games of NHL experience, is one of the leaders for the open 12th and 13th forward spots.

“You take every opportunity you can to prove you can play there,” Sabres coach Dan Bylsma said inside KeyBank Center. “He’s had four days, and he’s had four good days. Yes, he’s going to get an opportunity because of that.”

The 6-foot-3, 202-pound Grant, who signed a two-way contract after a monster AHL season with Calgary, knows Lehner and Sabres general manager Tim Murray from their days together with the Senators and their AHL affiliate in Binghamton.

“I think you always kind of look for an opportunity,” Grant said. “I think there’s not always that necessary opportunity. Coming here, I knew Tim from Ottawa. I had a good talk with him. I come here and try to force my way onto the team.”

Meanwhile, Lehner, Grant’s current roommate, looked strong in his first performance since undergoing season-ending ankle surgery in late March. A lighter Lehner – he shed around 40 pounds during the offseason – showcased quick movements throughout his first game since March 16.

“I think it’s a great step for him in where he wants to go and where he’s been,” Bylsma said. “He’s had a good summer and a good commitment to his game. … He needs to play two, three games here (before) the regular season.”

Hours before the game, Lehner mentioned how badly he wanted to beat the Senators.

“I do think it was special against his old team Ottawa,” Bylsma said. “He kind of gets that twinkle in his eye when he’s playing his old team again.”

Lehner added: “I feel like I prepared well. It’s a preseason game against a former team. Obviously, I really want to win this one. But for me right now, it’s just to get back into the swing of things and get repetition in and start focusing on the first game of the season.”

Baptiste, 21, is also in the mix to stick around for the Oct. 13 season opener. The former third-round pick, a second-year pro, also assisted on Grant’s tying goal. Baptiste scored a hat trick in a rookie camp game earlier this month.

Sabres center Jack Eichel, just back from the World Cup of Hockey, skated with a few teammates Tuesday and will practice regularly today for the first time in camp.