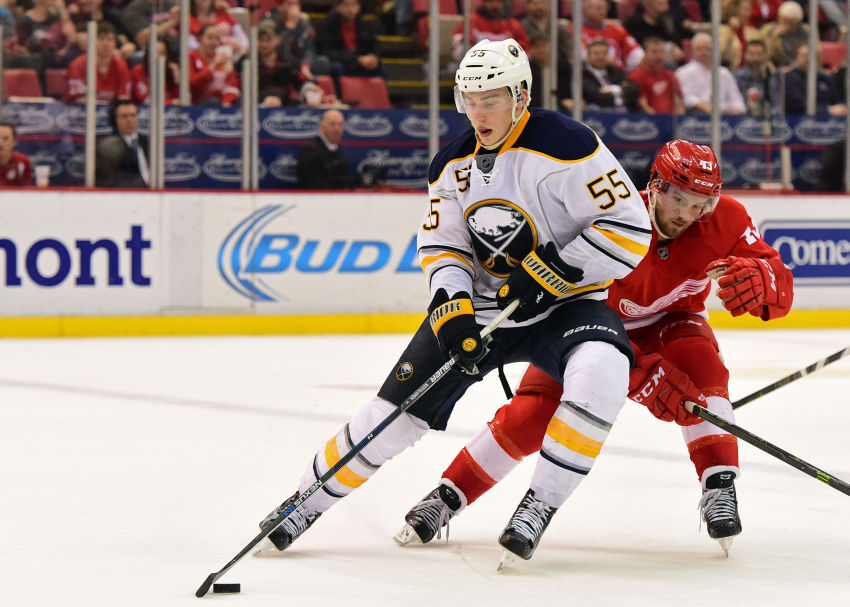 Rasmus Ristolainen was all over the ice Tuesday. ©2015, Dan Hickling, Olean Times Herald

BUFFALO – No one could believe the number that has been attached to Rasmus Ristolainen’s stat line all season: zero.

“Really?” he asked following practice inside the First Niagara Center.

Bylsma then tapped the podium – knock on wood – and said he was worried about Ristolainen getting his first penalty tonight at home against the Arizona Coyotes.

Incredibly, Ristolainen hasn’t been whistled for an infraction since March 20, a 35-game run.

“I still try to play hard and work hard and win the battles,” Ristolainen said, “but I guess I’ve done a pretty good job.”

That clean, efficient play, of course, illustrates Ristolainen’s rapid development in his third NHL season. The 6-foot-3, 201-pound Finn might be taking his first steps into stardom.

Consider: Ristolainen has already compiled four goals and 17 points while showcasing a physical game and maintaining his poise against the competition’s top talent every night.

Ristolainen’s last outing, Buffalo’s 5-4 shootout loss Tuesday in Detroit, might’ve been the best of his 137 NHL games. He recorded three assists – he was originally credited with a fourth – while skating a career-high 27 minutes, 55 seconds.

Ristolainen, the eighth overall pick in 2013, joked earlier this season he would like to play 60 minutes.

“Didn’t feel bad,” Ristolainen said about his playing time Tuesday. “It’s not how much you want to play; it’s how many minutes you earn.”

Gorges, who has played beside Ristolainen all season, believes “the potential is definitely there” for his partner to develop into a star.

“He’s kind of the guy for us right now we lean on in every situation,” Gorges said.

Stardom, Bylsma believes, “is a big word to put on anybody.”

“But I think he’s a big-time player,” he said. “We’re going to count on him to defend and be out against the best players in the world every night. I don’t know if that’s going to be stardom, but that’s what we’re counting on him to do.”

The Sabres count on Ristolainen for a lot more than defending. He’s only three points behind center Ryan O’Reilly for the team lead. Rookie center Jack Eichel’s 12 points rank third.

Ristolainen, who had 20 points in 78 games last season, is on pace for 56, a gaudy number for a defenseman in this low-scoring era. A Sabres defender hasn’t hit the prestigious 50-point mark since Garry Galley had 54 in 1995-96.

Still, despite the offensive surge, Bylsma has seen the biggest growth in Ristolainen’s defensive game.

“He’s playing against the best players every night,” Bylsma said. “He’s taking that as a challenge and he’s improved his game in a lot of areas in that regard. It’s been big for our team.

“I don’t know how I view the points. I don’t think they’re a result of some good play with the puck. They’re not a result of him being a fantastic offensive defenseman or a risk-taker. They’ve come right in the midst of playing against other teams’ best players.”

Gorges has seen other signs of maturation, including in Ristolainen’s communication skills.

“The biggest thing about your partner is if he communicates or not, and I think that’s something that even from last year to this year, the start of this year until now, I mean, I hear him every shift – he’s talking, he’s yelling, he’s letting me know,” Gorges said. “That makes my job so easy out there. You don’t have to think, you don’t have to look. You listen to your partner.”

Gorges also likes his partner, someone he calls a “good guy.”

“He loves the game,” he said. “He comes with a lot of passion every day. He loves being at the rink, and I think when you have that enthusiasm at that age with as good as he is, he can only continue to get better and better.”

Gorges added: “He makes my life easy out there.”

Lehner has a stall in the dressing room again and is out of a walking boot. His return, however, could still be weeks away. The Sabres said Lehner would miss six to 10 weeks when he was injured Oct. 8.

Sabres center Zemgus Girgensons said he had “different” and “mixed” emotions telling Latvian fans in a tweet Wednesday not to vote for him for the NHL All-Star Game again this season.

Girgensons, who has struggled this season, was voted in a year ago thanks to some rabid support in his home country.

“It’s not something I got too much satisfaction out of, so I don’t want to repeat that this year,” he said.

Will the fans listen?

“I don’t know,” he said. “That’s up to them. It’s something that is not in my satisfaction. That’s totally different. That should be deserved.”