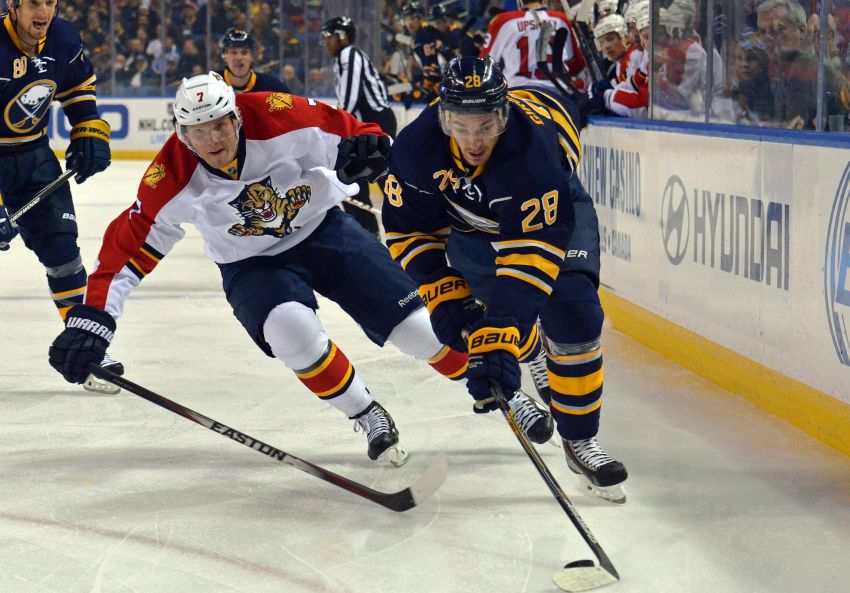 BUFFALO – Coach Dan Bylsma noticed it right away. So did some others on the ice for Wednesday’s practice, the Sabres’ first training camp session with defenseman Dmitry Kulikov.

“A couple comments on the D-man (being) able to get the puck up to the forwards with Dmitry,” Bylsma said inside KeyBank Center. “It’s good to see.”

The Sabres acquired Kulikov from the Florida Panthers on June 25 for a slew of reasons, including his strong ability to move the puck.

Kulikov, 25, just spent three weeks with Team Russia at the World Cup of Hockey. He was joined Wednesday by center Jack Eichel, who also participated in the tournament.

“The skill level of our team spiked today with both those guys being on the ice,” Bylsma said.

With defenseman Rasmus Ristolainen still unsigned and out of camp, Kulikov, who could be a first-pair defender, mostly practiced with Zach Bogosian.

“It hasn’t been long since the World Cup,” Kulikov said. “I just needed a little adjustment to come back and hit the reset switch and get ready for training camp. First practice is out of the way, I’m learning the system, video, getting to know the guys here in the locker room.”

“It was amazing, if one word could describe everything,” he said. “You never dream that a tournament like that would be played again. When … they announced the teams and I was on the roster, I was thrilled. Having that experience now, especially before the season, coming into a new team, I think it’s going to give me more confidence and boost my play throughout the season.”

Kulikov will sit tonight when the Sabres play the Toronto Maple Leafs in St. Catharines, Ontario, their third preseason game, Bylsma said. He could play Friday when the Sabres host the Leafs.

Bylsma on Sabres goalie Robin Lehner, who looked sharp while stopping 37 shots in Tuesday’s 3-2 overtime win against the Ottawa Senators: “The one thing you can draw from the game (Tuesday), I think if that’s the way our goaltender can play … we’re going to have a lot of success. He was commanding in the net.”

Lehner underwent season-ending ankle surgery in late March and spent the summer rehabbing and losing weight. He looked quicker Tuesday than last season, his first with the Sabres.