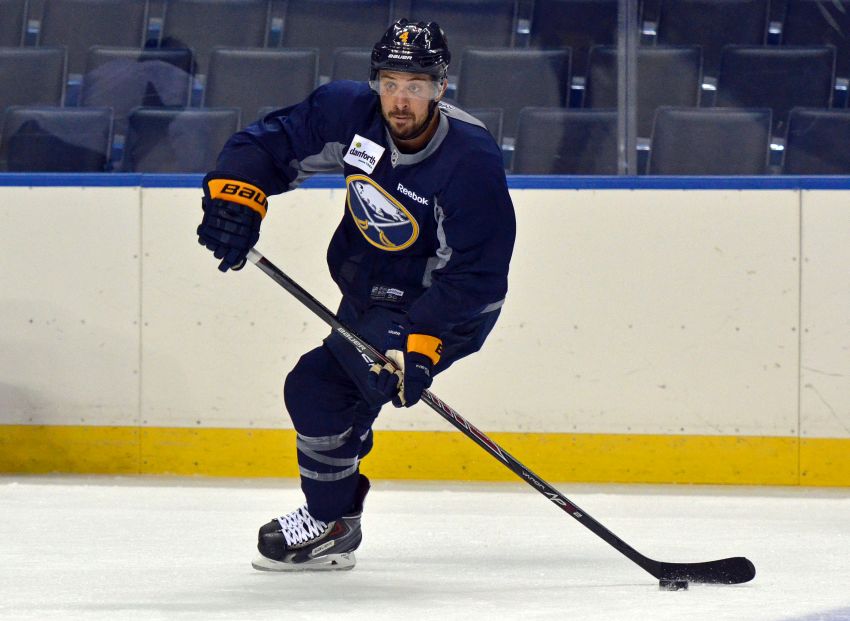 BUFFALO – Sometimes after a particularly rough shift, when Sabres defenseman Josh Gorges is gassed and trying to catch his breath, he’ll glance over and marvel at his partner Rasmus Ristolainen, an emerging star 10 years younger than him.

“Risto’s sitting there like he’s not even tired yet, and he was out there the same amount of time,” Gorges said Monday after the Sabres prepared for tonight’s road tilt against the Ottawa Senators.

In those moments, the passionate Gorges, 31, might give himself a mental pep talk.

Gorges, of course, feeds off Ristolainen’s youthful energy. The two have grown close this season, spending time off the ice talking about hockey and life.

When Gorges returned from a five-game absence last month, Ristolainen said skating beside his partner feels like “home.”

“(A) 21-year-old who just brings a new perspective back to why we play this game,” Gorges said inside the First Niagara Center. “We play it for fun.”

Gorges hardly had any fun last year, the worst season of his 11-year career. As the Sabres became the NHL’s laughingstock, he handled it poorly, getting too wrapped up in his responsibilities as one of the rebuilding team’s leaders.

That’s why Gorges vowed this season would be different. Gorges said during training camp the adversity he endured in 2014-15 before microfracture surgery ended his season after 46 games had changed him.

“I’m an emotional guy. I’m a fiery guy,” Gorges said. “You’re here to compete and win at all costs, I believe. Sometimes your emotions get the best of you. Sometimes it’s good and sometimes it’s not. You learn to deal with that.”

When informed Sabres coach Dan Bylsma had once called him “crusty,” Gorges smiled.

Still, while Gorges believes he has “felt more in control of myself this year,” he hasn’t changed completely.

“You got to stay true to who you are,” he said. “I … got to this point by being who I am, and that’s not going to change. I think when situations arise and sometimes you need to step out of your comfort zone … maybe you have to say something, maybe you have to do something to fire your team up.”

Gorges said he has learned about himself, his teammates and “the right time” to say something.

“It’s stuff you only learn it once you go through it,” he said.

The undrafted Gorges probably knows he could lose his job if he ever changes his makeup completely. Talent didn’t help him reach the NHL.

That’s why coaches keep pairing Gorges next to their young stars.

“I like that responsibility,” Gorges said. “I’ve been fortunate to play with some pretty talented hockey players who make my job really easy.”

This season, Bylsma said, Gorges has “been a stalwart next to Risto.”

Clearly, getting his knee repaired has helped Gorges regain some jump he lost.

“Coming off a major surgery like that, there’s always a little bit of uncertainty when you’re coming back,” he said. “How am I going to respond? How is it going to hold up over the course of a full season? So you think about it … try to put it away (and) just go through the moment. But things have been good.”