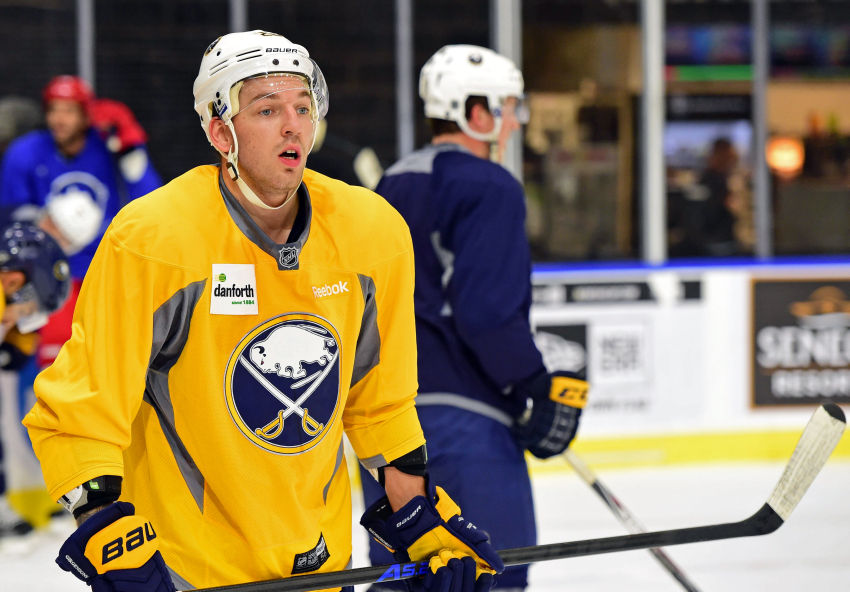 BUFFALO – For a team that just endured a brutal 54-point season and might have nine new faces in the lineup opening night, the Sabres should enjoy a remarkably quiet training camp, their first under new coach Dan Bylsma.

There are, of course, still some intriguing storylines to follow. Second overall pick Jack Eichel’s first days in the NHL promise to be exciting. Sam Reinhart, the franchise’s other top prospect, will be fighting for a roster spot. Just watching so many talented new players will be a special experience for a rabid fan base worn out from years of losing.

But, incredibly, most of the roster is set. Perhaps only one forward or defense position is available.

How soon can Eichel be a top center?

The Sabres might ease Eichel into the lineup early in the preseason, perhaps as their third center. But how long will that last? Eichel, 18, can’t play 15 minutes a night for long, right? He could already be the Sabres’ top pivot.

Naturally, the Sabres want to lessen the pressure on Eichel. That’s one reason they paid a steep price to land Ryan O’Reilly from the Colorado Avalanche the same day they drafted the phenom. Bylsma has already anointed O’Reilly his No. 1 center.

But if Eichel adjusts to the NHL quickly – he looked dominant at times during two pre-camp prospects games – he should be playing big minutes when the season opens Oct. 8.

Can Reinhart make the team?

Publicly, general manager Tim Murray has said he expects, Reinhart, 19, will be with the Sabres this season.

After they sent Reinhart back to junior early last season, he dominated in the Western Hockey League, enjoyed a starring role throughout Team Canada’s run to world junior gold and scored three points in three-late season AHL games.

But remember, Reinhart, the second overall pick in 2014, looked invisible during a nine-game NHL trial. Can he really morph from a non-factor into, say, the Sabres’ second or third center in less than a year? The Sabres likely won’t keep Reinhart in the NHL if he’s going to skate short minutes on the fourth line.

Reinhart’s eligible to play regularly with the Rochester Americans this season. Spending some time in the minors – it’s not crazy to think he can score a point a game – could help him.

Where will Zemgus Girgensons and Johan Larsson play?

Girgensons played the wing and center as a rookie two years ago before he became the Sabres’ No. 1 center much of last season. But with Eichel, Larsson, O’Reilly and possibly Reinhart down the middle, the Sabres might want to switch the Latvian back to the wing so he can play on the top two lines.

Larsson, who can also play on the side, ended last season as the Sabres’ top center, compiling five goals and 15 points in the final 20 contests. But the Swede never produced and even pouted as a fourth-liner. Would the Sabres trade him if they can’t find a spot for him on a scoring line? He can’t return to Rochester without clearing waivers.

Reinhart has also been mentioned as a candidate to move to the wing.

Can a youngster or veteran crack the defense?

Seven defense spots – teams dress six and usually keep no more than eight – appear to be solidified. Barring a trade or some injuries, Zach Bogosian, Carlo Colaiacovo, Cody Franson, Josh Gorges, Mark Pysyk, Rasmus Ristolainen and Mike Weber should all be on the opening-night roster.

But one of the Sabres’ prospects or journeymen signings could steal a spot.

Jake McCabe, 21, has already played nine NHL games and should receive a long look. The 2012 second-rounder’s physicality stood out during Monday’s prospects game. Chad Ruhwedel, 25, had 10 goals and 36 points in Rochester last season. Matt Donovan, 25, spent all of last season with the New York Islanders. Bobby Sanguinetti, 27, the New York Rangers’ 2006 first-rounder, is one of the AHL’s best defensemen and spent all of 2012-13 with the Carolina Hurricanes.

Can Robin Lehner prove he’s a No. 1 goalie early?

Murray watched Lehner develop with the Ottawa Senators and paid a steep price – the 21st pick in a deep draft – for the Swede to be his new starting goalie.

Lehner, 23, won a Calder Cup in Binghamton for Murray and has, at times, performed well in the NHL. Still, he has never started for a full season and suffered a severe concussion in the winter.

The Sabres play seven preseason games, so Lehner might start three or four. If he falters, would they consider turning to backup Chad Johnson?

The NHL has designated 45 preseasons games, including three involving the Sabres, to test the new three-on-three overtime format, regardless of the score.

Fan cans see it Monday at the Minnesota Wild, Wednesday at home game against Ottawa and Oct. 1 at Minnesota.