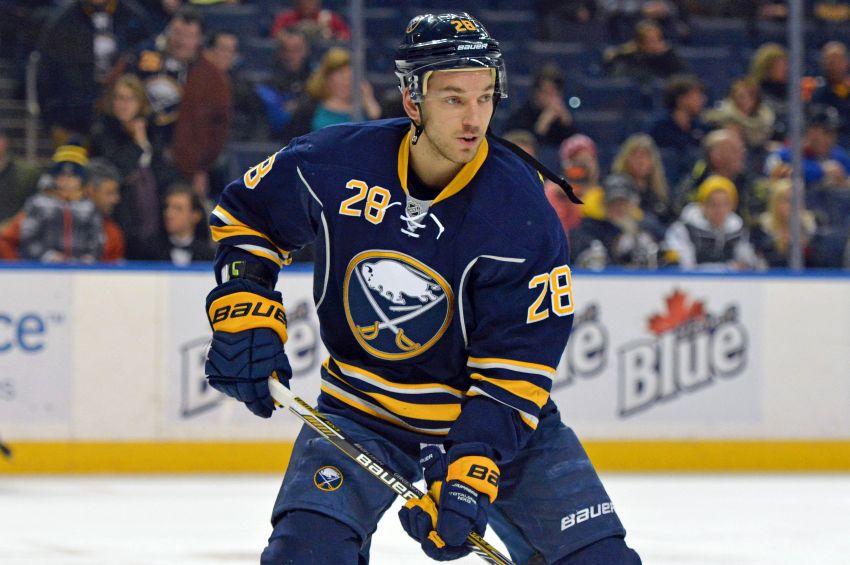 BUFFALO – Five years later, the Christmas cards Jim Hall sends out each year feature photos of his three children and someone so close he calls him another family member, Sabres center Zemgus Girgensons.

“Z’s been on our Christmas card we send out ever since he’s lived with us,” said Hall, Girgensons’ billet during the 2009-10 season.

Before he became an NHL All-Star and a household name in Buffalo, Girgensons spent his first year in North America playing junior hockey in Vermont with the Green Mountain Glades organization.

Those who knew the 21-year-old Latvian then recall a quiet, hardworking and immensely likable teenager who assimilated to American life quickly, making friends and earning respect everywhere he went.

It’s no secret the rabid fans in his hockey-mad home country boosted Girgensons’ vote total to an NHL-high 1,574,896, securing his spot in this afternoon’s NHL All-Star Game in Columbus. But Hall believes Girgensons’ old neighborhood in a small Vermont town of about 7,000 people also played a big role.

“I literally think he got close to that amount of votes from Bayfield Drive in Shelburne,” Hall said by phone Friday. “All the neighbors were voting for him every day. It was great.”

To this day, Hall said, everyone on the street tells a little story about Girgensons, who kind of became the neighborhood’s “mascot.”

“One of them would bring him to the airport if I was busy,” he said. “Here’s this kid who’s 15, would come around to Thanksgiving dinner, and now he’s playing for the Sabres.”

As a single father working and coaching hockey, Hall was initially hesitant to take another person into his house. But he figured billeting Girgensons would be his way of giving back.

“Immediately fit right in with my three kids,” he said. “It was just such an incredible experience for us.”

They all knew right away.

Long before Girgensons came to North America, Sabres goalie coach Arturs Irbe, a Latvian hero who played with Girgensons’ father, Aldis, heard about him from his brother.

Chris Line, Girgensons’ Glades coach, knew his talents would at least land him in the NCAA.

How did a Latvian kid end up in Vermont?

Line said when Girgensons’ European Selects team played a tournament in Boston, Girgensons’ father expressed interest in his son coming over. An injury ended the elder Girgensons’ career, so he valued college. The Glades, meanwhile, wanted a high-end youngster who was looking to play NCAA hockey.

Girgensons started on the Glades’ Junior B team, a club he quickly outgrew.

He gained 15-20 pounds in the first two or three months and learned a new style on the smaller North American ice, Line said.

“He really became quite comfortable with the game,” Line said. “It came quite natural for him.”

Girgensons compiled 17 goals and 29 points in 19 games before the Glades promoted him to their Junior A squad. Playing against some opponents four or five years older, Girgensons had 11 goals and 28 points 23 games.

Talent, of course, buoyed Girgensons. But so did his maturity and work ethic, attributes Sabres coach Ted Nolan praises these days.

“Very, very coachable,” Line said. “You tell him to do something, he does it the next time. But very, very mature beyond his years, and certainly calculated in the way he goes about his business.”

Line added: “I can tell you right now that (work ethic) did not start in Buffalo. That was something he obviously grew up with. I witnessed it every day here when he was 15 years old.”

Older players, Line said, looked up to him even though he was the team’s youngest player.

“It became pretty clear he was on the path to potentially play pro hockey,” Line said.

Girgensons eventually committed the University of Vermont, but instead signed with the Sabres after they drafted him 14th overall in 2012.

He also adapted quickly off the ice. Today, Girgensons speaks perfect English. Back then, he still had a strong Latvian accent.

Hall found out Girgensons had a grasp of his new language when he left him a note one day.

“Here’s this young kid who was just learning the language, his handwriting, it looked like the Constitution,” Hall said. “It was so beautiful. I remember thinking like, ‘Jesus, he can hardly speak, but look at his handwriting.’”

Girgensons has 13 goals and 22 points this season, strong numbers for a second-year player on an awful team. Still, he ranks 76th overall in goals and 169th in points. He likely wouldn’t be an All-Star this year without the votes.

“He’s very special player,” Irbe said. “The rules are the rules and laws are the laws.”

The game will be “double special” back home, Irbe said. Girgensons is Latvia’s only NHL player.

“They’re happy that one of their representatives of Latvia’s back at the All-Star Game, and twice as special because they know without them Zemgus would not be in the All-Star Game this year,” he said. “He would make it eventually most likely. They definitely fast-forwarded that process with their devotion and sense of mission.”

Skating beside superstars, Irbe believes, will only strengthen Girgensons’ determination.

“He’s not going to start to think he’s become a superstar, he doesn’t have to improve,” he said. “There’s not the one smallest, smallest part in his body that will accept standing still or status quo. He always wants to get better, and this only can be a great experience and can make him realize how much better he can be.”

He added: “I don’t think there is much that can derail this kid, and if he derails, he only derails for a short while. So he’s a very determined player.”

Line said Girgensons becoming an All-Star at 21 “is pretty unfathomable.”

“It just goes to show you how hard this guy works at his craft and how much people respect him,” he said. “He just carries himself extremely well. He works extremely hard. I don’t think you can talk to anybody that’s been around him as a teammate or coached him or anything that can tell you any differently.

“He’s an animal in the gym. He just lives, breathes, sleeps, eats hockey. … The sky’s the limit for him.”

Girgensons has said very little about his All-Star honor. At times, he seems embarrassed by all the attention.

“Very quiet, he’ll open up once he knows you,” Hall said. “His natural tendency is to be quiet. He’s very reserved. He’s one of the family. He still is to this day.”