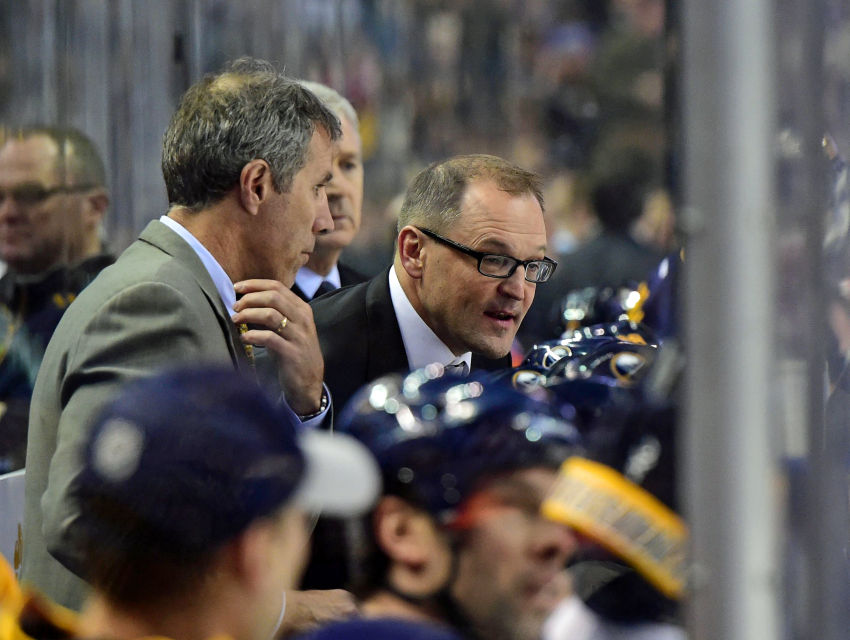 BUFFALO – Sabres coach Dan Bylsma noticed almost immediately, way back in September, and it surprised him. Training camp had just started with an overhauled roster – about 10 new faces, in fact – yet his players were already forming close bonds.

“They enjoy being a part of this team and part of this group,” Bylsma said Thursday inside the First Niagara Center. “It has developed. It is a part of what we are. … It is a calling card of our team.”

Almost four months later, the Sabres have only grown closer.

“We enjoy each other’s company,” said center Ryan O’Reilly, the Sabres’ only NHL All-Star. “That’s definitely a big part going forward for us. In order to have success, we have to be able to talk about everything.”

The Sabres have a lot to talk about these days. They’ve lost five straight games and fallen to 29th in the 30-team NHL heading into tonight’s tilt against the Chicago Blackhawks, the start of a three-game road trip and the official halfway point of the season.

On the surface, the Sabres might not appear to be much better than last season, when they finished dead last. At 15-21-4, they have only 34 points. A year ago at this time, they had 31 points and were in the midst of their epic 14-game regulation losing streak.

Of course, it’s been well documented how much the Sabres have improved. They’re competitive, can execute a rigid system and often outplay their opponents.

The Sabres, more or less, have morphed back into a real team. They have 13 one-goal losses. Players will tell you they’re on the right path. Still, they haven’t seen the results they want to, and that can make it difficult to believe you’re doing the right things.

“It’s still a process for our team in developing how we’re going to play, in developing who we are,” Bylsma said. “And not getting the results and looking at yourself in the standings, it can be difficult. But we do have to stay focused here on the process.”

Clearly, Bylsma, who was hired in May, has created a new standard.

“I think that was evident right from the start of training camp,” Sabres defenseman Josh Gorges said. “It’s not OK, it’s not acceptable to be average. It’s not OK to lose games. … The expectation has changed, and I think that’s why when we’ve lost a couple like we have here recently, guys take it personally. They take this to heart.

“This is serious, because we’re a better team than what our record has shown here lately.”

Here are some of the reasons the Sabres have improved so much but still rank among the league’s bottom-feeders.

They can’t score goals: The Sabres have only 91 goals, just 2.28 a game. Only three teams have averaged fewer.

The youngsters are picking up the slack: Rookie center Jack Eichel, 19, has quickly become one of the Sabres’ best players, compiling 13 goals and 26 points. The second overall pick has has been on a tear recently, scoring four goals and 12 points in his last eight games.

Rookie Sam Reinhart, meanwhile, has nine goals and 16 points. The second overall pick in 2014 has been playing on the first line with O’Reilly.

The goalies have been solid: With no established NHL starters, goaltending was the Sabres’ biggest question mark before the season. It became a bigger one when No. 1 Robin Lehner suffered a high right ankle sprain opening night.

“We really hadn’t seen any of these guys in net for us,” Bylsma said.

“We’ve gotten … good goaltending from both those guys,” Bylsma said.

Johnson is 7-5-2 with a 2.10 goals-against average and a .930 save percentage since the beginning of November. Ullmark has slumped recently, going 1-8-2 in his last 11 starts. A lack of goal support – the Sabres have scored just twice in his last four nods – has hurt him badly. The Swede, however, won four of his first six starts.

Rasmus Ristolainen has become the Sabres’ best defenseman: In his third season, Ristolainen has developed into a star, skating almost 25 minutes a night. The Finn has seven goals, 26 points and just two penalty minutes, an incredible number given how much he plays and the competition he faces.

Ristolainen, 21, has slumped a bit recently. He’s a minus-6 in his last seven games and hasn’t scored a goal in 11 contests. Still, he’s enjoying a breakout campaign.

Bylsma said since the Sabres officially assigned Lehner and defenseman Mark Pysyk (broken foot) to the Rochester Americans on Thursday they have reached the 23-man roster limit. Conditioning assignments count against the NHL roster.

Amerks center Cal O’Reilly, who has three goals and 19 points in 28 games, has been selected for the AHL All-Star Game.