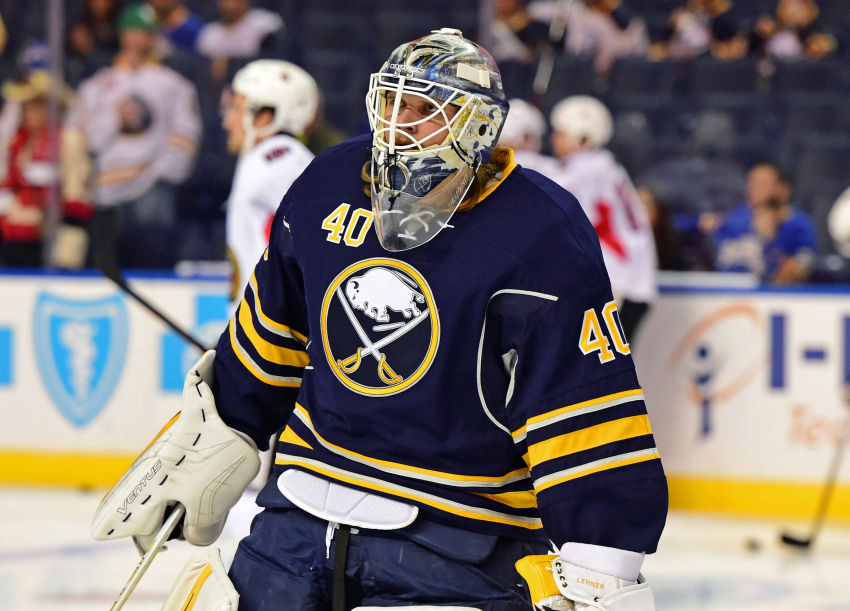 ROCHESTER – Robin Lehner knew his first rehab appearance for the AHL Americans could be a bit rocky. After all, the goalie hadn’t played since suffering a high ankle sprain opening night, his debut as the Buffalo Sabres’ new starter.

Lehner, 24, looked shaky at times Friday inside the Blue Cross War Memorial. In his first action since Oct. 8, the Swede allowed a goal on the fifth shot he faced and three scores on the first nine shots in the opening 18:10 of the Amerks’ exciting 5-4 win over the Hershey Bears.

Lehner allowed two tipped goals – the first and the fourth – a power-play one-timer from the left circle and a breakaway. He wanted the one-timer back.

“I felt pretty good,” Lehner said. “Four goals, but I thought three of them were a little bit lucky. I felt like I was in position for all of them but the breakaway. I missed his a little bit. It felt as good as it’s going to be after almost a year without a full game. I felt like I got better as the game went on. I felt calm.”

Lehner has endured a long road back. He suffered a season-ending concussion with the Ottawa Senators on Feb. 16, 2015. After the Sabres traded a first-round pick for him June 26, he he hurt his right ankle 28 minutes into his first game.

“It’s been frustrating,” Lehner said. “It’s been a tough period of my life. … I haven’t been injured before like that, and I got two consecutive ones and two pretty serious ones. It was not easy to go through. I had a high ankle sprain, which is pretty terrible for a goalie to get back. I’m probably going to have pain in my foot for the rest of the year.”

Lehner will sit out the Amerks’ road contest tonight against the Binghamton Senators. He plans to play again Sunday when Rochester hosts the Syracuse Crunch. He could also play Wednesday’s road contest against the Albany Devils.

Friday was Lehner’s first AHL appearance since Feb. 16, 2013. When he returns, he will likely be Buffalo’s starter again.

“In short order here, Robin’s going to get a chance to do it in net for us,” Sabres coach Dan Bylsma said Thursday.

Meanwhile, Sabres defenseman Mark Pysyk, out the last 23 games with a broken foot, also played the first game of his rehab assignment. Pysyk, 23, hadn’t played since Nov. 17. He mostly skated beside Brady Austin.

“The first few shifts were good to get out of the way,” Pysyk said. “I was a little bit nervous going in. But other than that, conditioning felt pretty good.”

Why was Pysyk nervous?

“I haven’t played in a hockey game for six weeks,” he said. “You can practice all you want. When you’re practicing, a guy’s not trying to run you through the boards. There in the game, it’s just a different feel.”

Pysyk plans to play all three games this weekend.

Center Phil Varone, a healthy scratch recently, had one goal and four points for the Amerks.