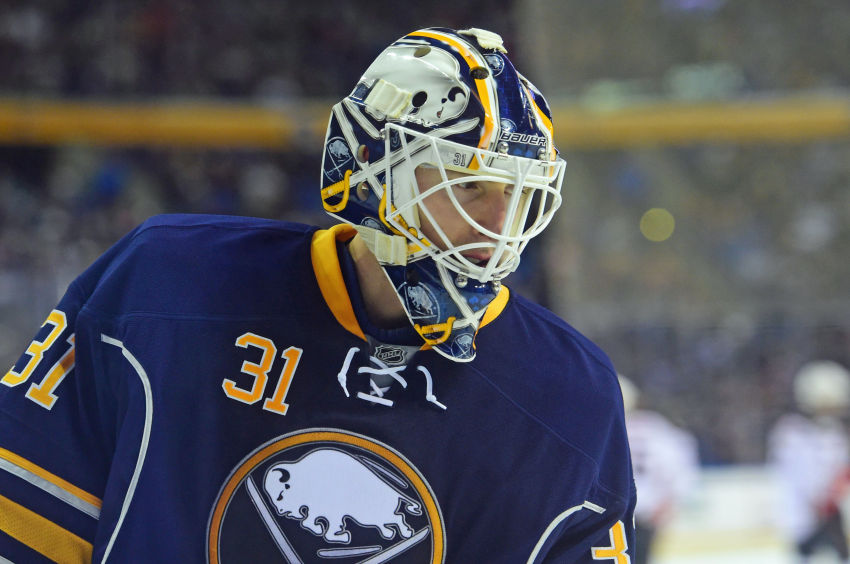 BUFFALO – On the ice, despite the chaos that often develops around his crease, Sabres goalie Chad Johnson usually showcases a cool demeanor.

“I’ve always been a guy that sort of keeps things simple,” Johnson said Friday inside HarborCenter. “I’m not a very flashy goalie. I’m not going to do the splits and make a windmill glove save. I like to make it look easy and sort of protrude that confidence. I don’t need to make things look difficult.”

Off the ice, Johnson conducts himself the same way – he’s unassuming and soft-spoken.

Fresh off a 44-save shutout Thursday, Johnson will start this afternoon’s tilt against South Buffalo native Patrick Kane and the Chicago Blackhawks inside the First Niagara Center, the Sabres’ last game before a Christmas break.

Johnson has clearly emerged as the better option. Ullmark has lost seven of his last eight starts. Johnson, meanwhile, went 3-1-1 with a 1.28 goals-against average and a .954 save percentage in November.

But Johnson is a career backup, having never played more than 27 games in an NHL season. This afternoon will be his 22nd appearance. Ullmark, 22, played regularly the last two years in Europe, but he underwent surgery on both hips in April.

So Bylsma has kept splitting up the work.

“I don’t think we’re in a situation where we have a clear No. 1,” Bylsma said. “We’ve had a plan with our goaltenders. I’ve deviated from that plan at times and sometimes allowed performance to dictate that and sometimes not. I think both goalies have had games where they’ve played really well and didn’t get the next start.”

That’s when Bylsma sees some of Johnson’s passion.

“I’m always confident in what I can contribute to the team and the team’s success,” Johnson said. “I like to have control of that. I can’t say it’s frustrating. I don’t think you can accept not playing. But I’ve always been a team guy. It’s about the team first, winning.

“I’ve been there for Linus and helping him, and I’ve always been a good teammate to him and giving him advice and helping him along the way. … But I want to play and … be that go-to guy.”

Johnson might become that go-to guy if he can duplicate his recent performances. On Monday, he made 32 saves in the Sabres’ 2-1 win in Detroit, including a desperation glove stop on Gustav Nyquist with 19 seconds left.

While Johnson plays calmly, he has about three saves this season destined to become highlight-reel staples.

After Ullmark played Tuesday, Johnson posted a career-high for saves and his fourth NHL shutout in Thursday’s 3-0 victory against Anaheim.

“(Thursday) was a very similar performance to being in Detroit, where (he was) just solid, compact and controlled,” Bylsma said. “I think even added more of it to his game.”

Johnson has rebounded nicely following a down year with the New York Islanders in which his save percentage dipped from .925 to .889. Overall, he’s 9-9-1 with a 2.33 goals-against average and a .918 save percentage this season.

“I’ve felt good all year,” he said. “As a team … now I think everybody’s in a groove, and that helps the goalie out, and you see better results statistically for the goaltending side of it.”

Sabres winger Tyler Ennis, out the last 12 games with an upper-body injury, will return this afternoon.

Ennis, who hasn’t played since Nov. 23, wanted to get back before the break.

“You never want to wait because you’re competitive and you want to play,” he said. “Tough to sit and watch. But at the same time, it’s important to rest up and heal.”

To make room for Ennis, the Sabres sent center Cal O’Reilly back to the Rochester Americans. O’Reilly compiled one assist in two games.

Notes: Kane returns to Buffalo as the top Hart Trophy candidate. The slick winger has 19 goals and a league-high 47 points in 33 games. He had his 26-game point streak, the longest in 23 years, snapped Tuesday. … Sabres defenseman Rasmus Ristolainen, who has played more than 25 minutes five straight games, received a maintenance day from practice Friday. … Sabres winger Marcus Foligno (upper body) practiced in a non-contact role.