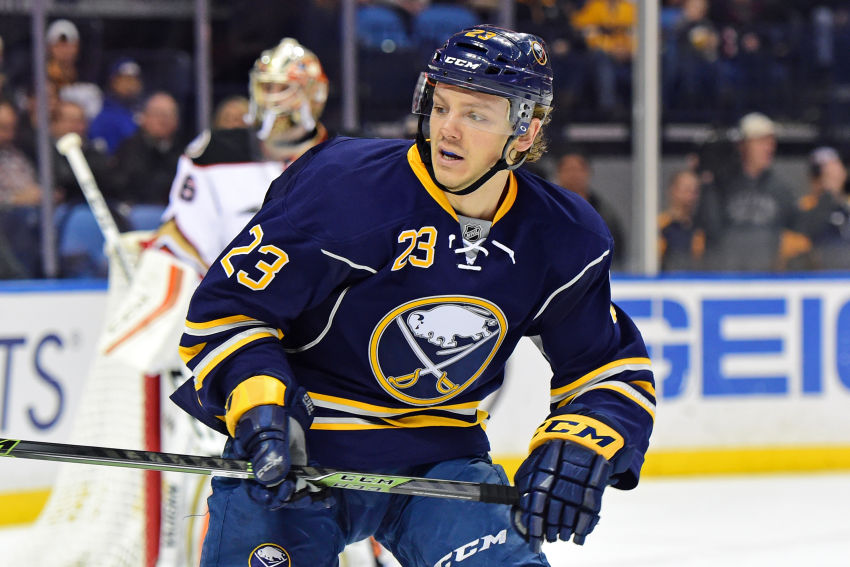 BUFFALO – The improvements, Sabres coach Dan Bylsma said, have been “drastic.” In a matter of months, winger Sam Reinhart has transformed himself from a raw prospect into a first-line NHL talent.

Reinhart, of course, possessed supreme hockey intelligence when the Sabres drafted him second overall in 2014. Now, the rookie, 20, has developed the physical tools to compliment his strong mind.

“You have to give him a lot of credit for his diligent work,” Bylsma said Sunday inside HarborCenter following the Sabres’ last practice before a five-day Christmas break.

Reinhart, who said he’s spent at least an extra 20 hours on the ice honing his skills, is by far the Sabres’ most improved player this season. In 34 games, he has eight goals – as many as Marcus Foligno, Zemgus Girgensons and Matt Moulson have combined – and 15 points. Reinhart has four goals and eight points in the last 11 contests.

Rookie center Jack Eichel, the second overall pick in June, has received most of the attention this season. But where would the Sabres, who have only 14 wins and 32 points, be without Reinhart?

It’s easy to forget now, but Reinhart was arguably the Sabres’ biggest question mark in training camp. Sure, general manager Tim Murray said months earlier they expected he would make the big club. But what else was he supposed to say? The Sabres had the option to send him to the minors.

Thanks to an impressive preseason, Reinhart never let them.

That means Reinhart – whose shot has morphed from a “muffin” into something “lethal,” Bylsma said – plays at a faster pace and has a greater intensity on the puck.

“Now my mentality going into a corner in a puck battle is that I’m going to come out with the puck,” Reinhart said. “So that’s more than half the battle right there, especially in this league. You got to kind of believe that you’re going to win the puck and you can win battles. So I think that’s the biggest part. But when I’m playing well, I’m winning pucks down low and hanging onto it and moving it around.”

Earlier in the season, Bylsma said, Reinhart wouldn’t even get to the puck.

“He’s now getting to areas, winning battles, strong on the puck,” Bylsma said. “I don’t like the word ‘confidence’ in the least bit, but he’s played with a lot of confidence in his game. He’s playing a strong game. He’s out in a lot of tough situations on the top line.”

“He goes to the right areas,” O’Reilly said. “You don’t see him kind of run around. He knows how to read the other team well, where the puck’s going to go, where it’s going to end up – and that’s a unique skill. A lot of people can’t see that, and he’s one guy it comes so easy to him. Playing with him, I get a puck, turn around, boom, he’s in the right area.”

Reinhart displayed those unique skills late Saturday afternoon in the Sabres’ 3-2 shootout loss to Chicago. With the game tied at 1, O’Reilly fed the puck from the left corner along the boards to Reinhart behind the net. Reinhart grabbed the pass, drifted back past the right post and fed O’Reilly from down low as he skated to the bottom of the left circle.

“The goalie had no chance, he was still looking at him trying to figure out where the puck is,” O’Reilly said. “Just a brilliant, heads-up play.”

But how long will Reinhart and O’Reilly stay together? The Sabres shifted Reinhart from center to the wing this season so he could skate on the Sabres’ top two lines. Bylsma recently told Reinhart he could move back and forth between center and the wing.

“I’m kind of prepared for that,” Reinhart said. “But I’m enjoying the wing. Obviously, playing with (O’Reilly) in the middle has helped my game a lot. Both positions I’m comfortable with.”