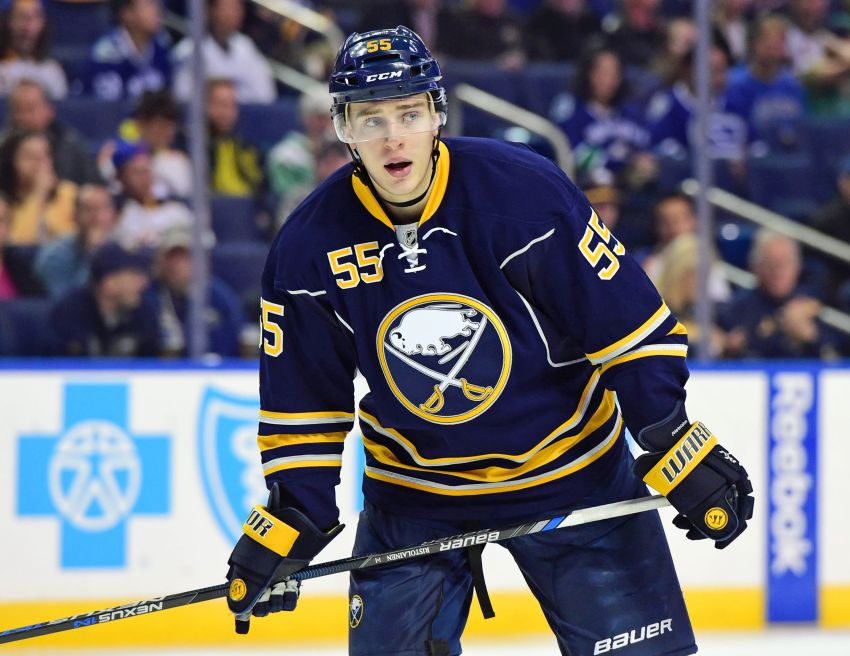 BUFFALO – Just hours before he had to set his roster Tuesday afternoon, Sabres coach Dan Bylsma called the 23-man squad a “little bit of a moving puzzle.”

In addition to a slew of injuries, Bylsma had one missing piece – the biggest, perhaps – No. 1 defenseman Rasmus Ristolainen, a holdout two days before the season opener against Montreal.

Bylsma was tight-lipped about the restricted free agent then, only saying he was “hopeful” something would get done. Of course, Bylsma possibly knew a deal was close. As the Sabres practiced earlier, general manager Tim Murray wasn’t watching from his normal seat inside KeyBank Center.

Murray and Ristolainen are scheduled to talk to the media today, so more details will be shared.

“Rasmus has already proven to be a pivotal player on our blue line and we are eager to have him back with the team,” Murray said in a statement. “This deal is a reflection of the hard work and improvement Rasmus has shown since being drafted and we hope to see him continue on this trajectory moving forward.”

Ristolainen, 21, was the Sabres’ best defenseman last season, compiling nine goals and 41 points while skating a team-high 25 minutes, 17 seconds a game in 82 appearances. He performed so well, despite constant action against the opposition’s best, he wasn’t penalized until Dec. 19, his 34th appearance.

The Finn’s deal falls in line with some other contracts top young defensemen have signed in the last year or so, according to generalfanager.com. Calgary’s Dougie Hamilton (six years at $5.75 million per), Columbus’ Seth Jones (six at $5.4 million) and Toronto’s Morgan Rielly (six at $5 million) are all comparable players.

The Sabres are now $2,262,978 under the cap, according to generalfanager.com.

Ristolainen joined the Sabres following the World Cup of Hockey and practiced without a contract as a “goodwill” gesture, said his agent, Mike Liut. But he left the team earlier this week when he was still unsigned.

Given the tight NHL fraternity, it’s possible few teammates would’ve begrudged him if his holdout crept into the season.

“He’s got to do what’s good for his career, and it’s understandable,” O’Reilly said before the deal was announced.

O’Reilly also said: “There’s a lot of pressure, outside pressure, too. I think the guys in the room, they understand, which is good. They have to. … He’s going to have a long career and he’s got to be smart.”

That means winger Hudson Fasching and defenseman Casey Nelson, who both played seven NHL games last season, and center Derek Grant, an AHL star, have made the Sabres.

The roster has 14 forwards, seven defensemen and two goalies.

Before Ristolainen signed, it sounded like Guhle would stay. The 2015 second-round pick can’t play in the AHL regularly because he has junior eligibility.

“I think he’s shown quite a bit in the last couple games he’s played that he can play in an NHL game,” Bylsma said before the roster was announced.

Bylsma said if the Sabres sent Guhle to junior, he wouldn’t come back this season.

In other news, defensemen Zach Bogosian (groin) and Dmitry Kulikov (bruised tailbone) practiced Tuesday and should be ready for Thursday, Bylsma said.

Meanwhile, O’Reilly (back/midsection spasms) and winger Kyle Okposo (bruised knee) skated on their own before practice. O’Reilly then joined his teammates for some special teams work.

“(This) is something he’s felt before,” Bylsma said. “What happened in the game with the first faceoff and the second faceoff was a little bit different than he felt before. One of the concerns is it’s something you deal with every second when you’re on the ice, exasperated when you’re taking a draw and you’re locking horns with another guy. It’s safe to say that we won’t see him take another faceoff for a few days.”

O’Reilly doesn’t want to rush back.