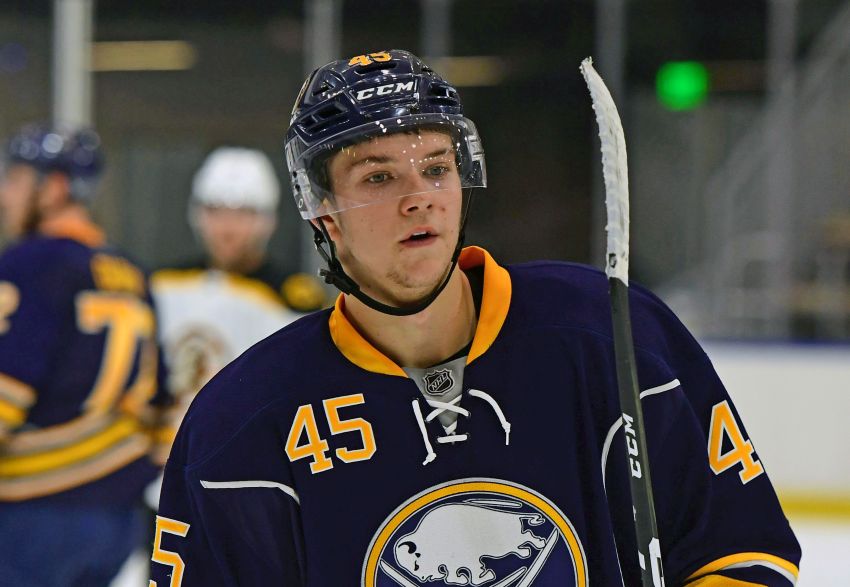 BUFFALO – Sabres prospect Brendan Guhle tries not to think about it. The defenseman doesn’t ask any questions, either.

He’s happy as long as he’s in Buffalo.

Six days before opening night, Guhle, 19, is still battling to make the Sabres out of training camp as a junior-age player, a rarity.

Guhle, the 51st overall pick in 2015, will make his fifth exhibition appearance in tonight’s finale in Ottawa against the Senators.

He has, of course, experienced some ups and downs this preseason. Sabres coach Dan Bylsma mentioned Guhle has inactive stretches where “he’s not been using his skating ability.”

“He’s showed quite a bit in digging in … and playing a very good, solid, hard second and third period in both of the last two games,” Bylsma said this morning. “It’s earned him one more game. The defensive situation with injuries, he’s got a possibility of earning another game if he plays well tonight for us.”

That would be Guhle’s first regular-season NHL appearance. The Western Hockey League star spent a few days with the Sabres early last season as he recovered from a concussion.

A year ago, before Dion Phaneuf’s wicked hit sidelined him, Guhle became the talk of camp, turning heads. Naturally, that greatly raised expectations for this season.

“I could be under the microscope,” Guhle said. “I know they’re watching me. I don’t need to think about that.”

In other news, Sabres goalie Robin Lehner will start tonight. Defenseman Tyson Strachan, who’s on an AHL contract, has recovered from an ankle injury and practiced this morning.

The rest of tonight’s forwards line and defense from left to right:

Update: The Sabres have assigned center Cal O’Reilly and defenseman Taylor Fedun to the AHL Rochester Americans (pending waivers) and recalled goalie Linus Ullmark. In addition, Strachan has been released from his tryout and sent to the Amerks.