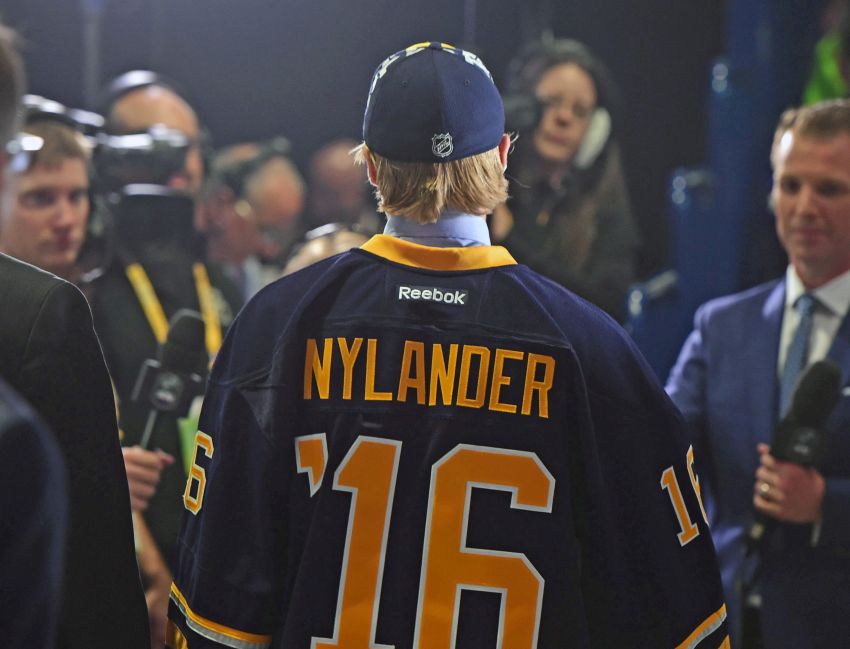 BUFFALO – Anyone unfamiliar with Alexander Nylander’s talents will immediately notice the speed the talented Swedish prospect possesses. The high-scoring winger the Sabres were thrilled to draft eighth overall last week might be one of the fastest skaters on the planet.

But Nylander, 18, doesn’t simply freewheel around the ice. The youngster utilizes his breakaway speed by changing it like Calgary star Johnny Gaudreau, said James Richmond, one of Nylander’s coaches with the Ontario Hockey League’s Mississauga Steelheads.

Nylander might be skating full tilt – Richmond said he can roar away from opponents in five steps – when he suddenly stops on a dime or quickly changes directions.

“Alex, he’s flying, and then all of a sudden (a) cut … to the left and cut to the right,” Richmond told the Times Herald by phone Wednesday. “Guys go by him. They’re just gone. Where did he go?”

Perhaps to the net, to utilize what Richmond said are “quick, quick hands that really destroy goalies.”

“The goalie’s going one way, then he has to stop hard to try to get back the other way,” he said. “There’s no way unless you break your ankle.”

To Richmond, who was recently promoted to head coach, Nylander “could very well be the most skilled guy in the draft.”

“I’ve seen (No. 1 overall pick) Auston Matthews, and he looks pretty darn good,” he said. “But Alex, man oh man, he’s pretty sick with his hands and his feet, for sure.”

But part of Nylander’s appeal goes beyond natural talent. Thanks to having a father, Michael, who played 920 NHL games, and a brother, William, who the Toronto Maple Leafs drafted eighth overall in 2014, Richmond said he already knows how to act like a pro.

“He worked his tail off,” Richmond said about Alexander. “Nobody outworked him. Nobody. The kid knows what he wants to do. He knows how to be a pro because his dad was there for so long. So I think he’s really, really got his priorities set. It’s great to see him go that high in the draft.”

Less than a year ago, the Steelheads weren’t sure if Nylander, a selection in the Canadian Hockey League Import Draft, would join them. Nylander was born in Calgary and moved back to Sweden around 2011.

After weighing his options, he arrived in Ontario shortly before the season opener. The transition, Richmond said, was seamless.

“He’s as close to North Americanized as any European I’ve seen,” Richmond said. “I don’t know if he’d want us to call him Canadian or American, but he’s pretty darn close.”

“For a first-year player to do what he did, it’s pretty special,” Richmond said. “We knew he was (special) when he hit the ice. We didn’t know how good he was going to be throughout the year. Great, great kid. Always happy. Doesn’t like losing.”

“He shows up in the biggest games,” Richmond said.

Still, is Nylander talented enough to perform on hockey’s biggest stage next season? The Sabres have four options for him: the NHL, a return to the OHL, Europe or the AHL, a league he’s eligible to play in because he was loaned to Mississauga.

Given Nylander’s instant success last season, the Sabres might want him to compete against men somewhere, meaning he’s possibly done in the OHL. The Sabres, however, haven’t said anything about where he could play in 2016-17.

“I think we’re getting a player that’s going to be a very high-skilled, impact player for our team down the road,” Sabres coach Dan Bylsma said Saturday.