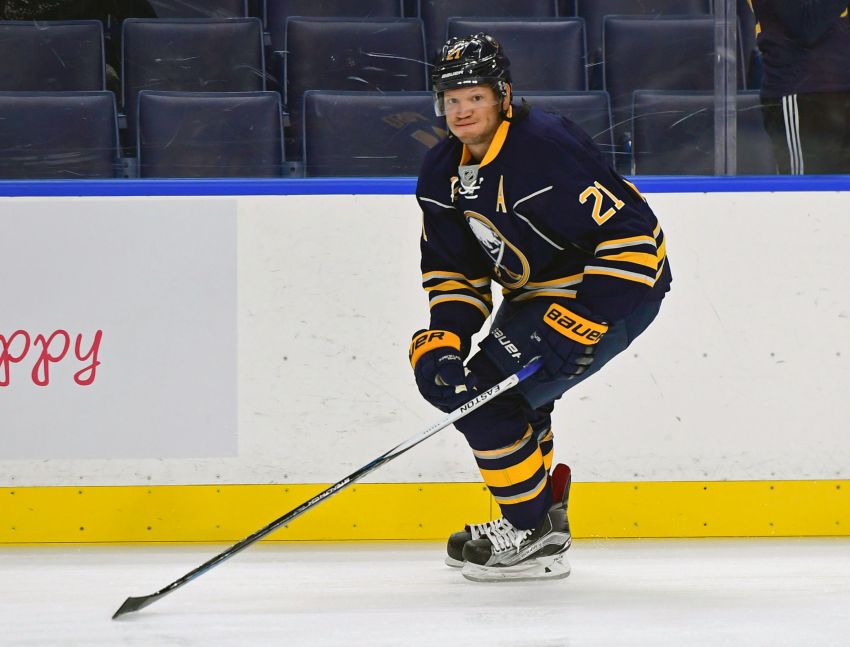 BUFFALO – It was about halfway through the lockout-shortened 2012-13 campaign, and Kyle Okposo, fresh off his first 20-goal season with the New York Islanders, suddenly couldn’t score or do much of anything.

“I was lost,” the Sabres newcomer recalled earlier in training camp inside KeyBank Center.

Like some other players who stayed home instead of jetting overseas for a temporary gig during the work stoppage, Okposo tried to prepare and be ready for whenever the season would start.

“I didn’t think I did the best job doing that,” Okposo said.

Okposo’s awful production proved that. The winger scored just once in his first 20 games. By late February, his ice time had been cut almost in half to around 11 minutes.

That’s when, Okposo, then in his sixth season, made a career-changing call to his agent, Pat Brisson.

“I called my agent and said, ‘Hey, is there any way I can get out of this?’” Okposo said. “He put me in touch with a coach I’ve used over the years.”

If Okposo, 28, hadn’t made that call, if he hadn’t decided to overhaul his approach, he probably wouldn’t be with the Sabres today, the recipient of a seven-year, $42 million contract in free agency.

“Once that happened, something just kind of clicked in my head, I figured out that I needed to dial in my nutrition, dial in my training and dial in some different things to try to be the best,” Okposo said. “The latter half of that year I started to play better, and then the playoffs I thought I played well.”

Okposo finished the 48-game season with only four goals and 24 points. Still, he improved down the stretch, compiling 10 points in his last 12 games.

In the 2013 postseason against the Pittsburgh Penguins, who were led by Sabres coach Dan Bylsma, Okposo scored three goals and four points in six games.

Okposo, the seventh overall pick in 2006, quickly found an identity again and began reinventing himself.

“That summer was a big summer for me just kind of eating right and getting my body ready and getting my skills where I thought they needed to be,” Okposo said. “The next year I had a good year.”

The Minnesota native has 67 goals and 184 points in 210 appearances (.80 points a game) during the last three seasons, the 26th-highest point total in that span, according to hockey-reference.com.

Twenty goals and 50 or 60 points have always been success standards. In today’s low-scoring era, perhaps only two or three players on a team reach those numbers.

Okposo, who has been sidelined with a bruised knee since Monday, has quietly established himself as one of the NHL’s most consistent scorers.

“I’m proud of what I’ve done,” he said. “I think there’s another level I can still get to. Figuring out how to get to that next level … 70 points a year, trying to get 80 points and then lead your team also into the playoff run.”

Okposo also attributes much of his success to watching Isles star John Tavares. Nobody, Okposo said, “works as hard as him or is as dedicated to him in the whole league.”

“I kind of saw what he was doing and the way his career was going and just kind of said, ‘Hey, what’s going on? Why is his game being so elevated?’” Okposo said. “I was just kind of getting into his head, seeing how he thinks, how he trains.”

Bylsma, a former division rival, has watched Okposo for years. He examined him closely throughout 2013-14, the season he coached Team USA’s Olympic squad at the Sochi Games.

Okposo’s commitment, Bylsma said, sets a standard for his teammates.

“His work ethic and his attention to detail and how he practices is clear when he talks about the changes to his game and his approach,” Bylsma said. “You can see where that is at. It’s leadership level for us.”

Notes: The Sabres, who had Saturday off, assigned goalie Linus Ullmark to the Rochester Americans. Forward Cal O’Reilly and defenseman Taylor Fedun also cleared waivers and will report to the AHL club. … Winger Tyler Ennis is still sporting a tinted visor, something he began using late last season after returning from a concussion. “I just got used to it and I like it,” Ennis said. “It’s helpful.” The tint helps him deal with the bright lights in the rink.