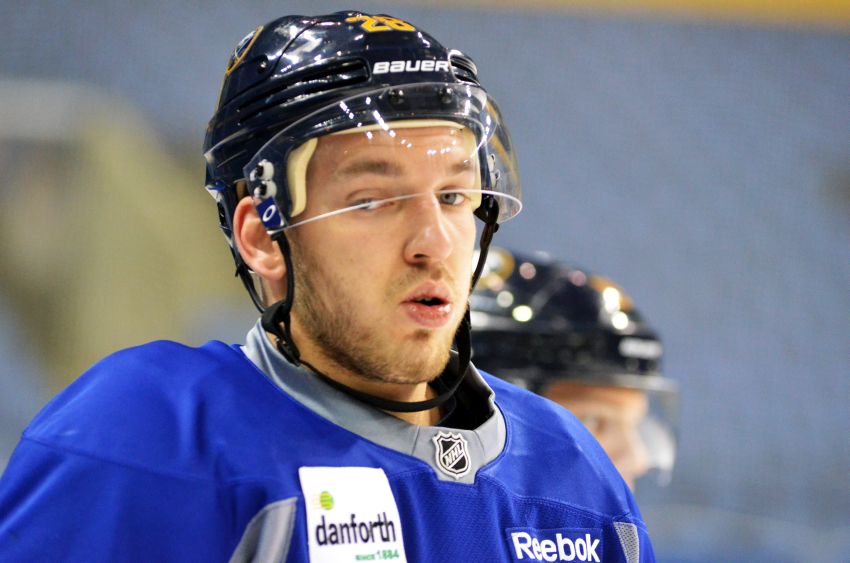 BUFFALO – Some experts are already predicting the Sabres, a team three months removed from the worst NHL season in recent memory, will be legitimate Stanley Cup contenders in a few years.

Why? Their prospect pool might be the deepest in hockey.

Seven first-round picks are participating in the team’s development camp this week. Seven of the 41 prospects played in the NHL last season, including center Zemgus Girgensons, who spent the entire campaign with the Sabres.

Fans can get their first glimpses of slick center Sam Reinhart, the second overall pick last month, in blue and gold and see the progress of Mark Pysyk and Rasmus Ristolainen, two young defenders close to becoming NHL regulars.

Here are some other intriguing youngsters (click on their names for more information) to watch closely during the sessions inside the First Niagara Center:

Joel Armia, winger: The 21-year-old finished his first AHL season strongly, scoring three goals and six points in Rochester’s five-game playoff loss. The Finn even had a two-goal, four-point outing. If he keeps progressing, the 2011 first-rounder could earn his first NHL recall next season.

Justin Bailey, winger: The 19-year-old Williamsville native scored 25 goals with the Kitchener Rangers last season. The 2013 second-rounder could be poised for a breakout Ontario Hockey League campaign in 2014-15.

Nicholas Baptiste, winger: The 18-year-old enjoyed a monster OHL season, scoring 45 goals in 65 games with the Sudbury Wolves last season. The 2013 third-rounder has quietly become one of the Sabres’ most intriguing prospects.

Hudson Fasching, winger: The 18-year-old, a key piece in March’s Brayden McNabb trade with Los Angeles, enjoyed a strong freshman season at the University of Minnesota, scoring 14 goals and 30 points in 40 games. His stock has skyrocketed since the Kings selected him in the fourth round in 2013.

Mikhail Grigorenko, center: Finally, after shuttling between the Sabres and QMJHL for two years, the 20-year-old’s eligible to play regularly in the AHL next season. The Russian, the 12th overall pick in 2012, should dominate camps like these. This week will be a barometer of his progress.

Brendan Lemieux, winger: The 18-year-old, the 31st overall pick last month, was one of the draft’s most intriguing talents. Lemieux plays like his famous father Claude, showcasing an agitating style and scoring touch. Buffalo fans will love his talents.

Vaclav Karabacek, winger: The 18-year-old Czech, the 49th overall pick last month, had 21 goals and 47 points in 65 QMJHL games with the Gatineau Olympiques last season. Lemieux and Eric Cornel’s selection earlier in the second round overshadowed Karabacek, however.

Sam Reinhart, center: The 18-year-old could be a future franchise cornerstone and superstar. Enough said. He signed a three-year contract Saturday.

Linus Ullmark, goalie: The 20-year-old has quietly crept into some of the Sabres’ top prospect lists. The Swede, a 2012 sixth-rounder will spent next season at home before coming to North America in 2015-16.

Nikita Zadorov, defenseman: The 19-year-old, the 16th overall pick in 2013, played seven games with the Sabres last season. The team’s new regime sent the Russian back to the OHL. Even with two impressive camps, the Sabres might assign him to the London Knights again next season.