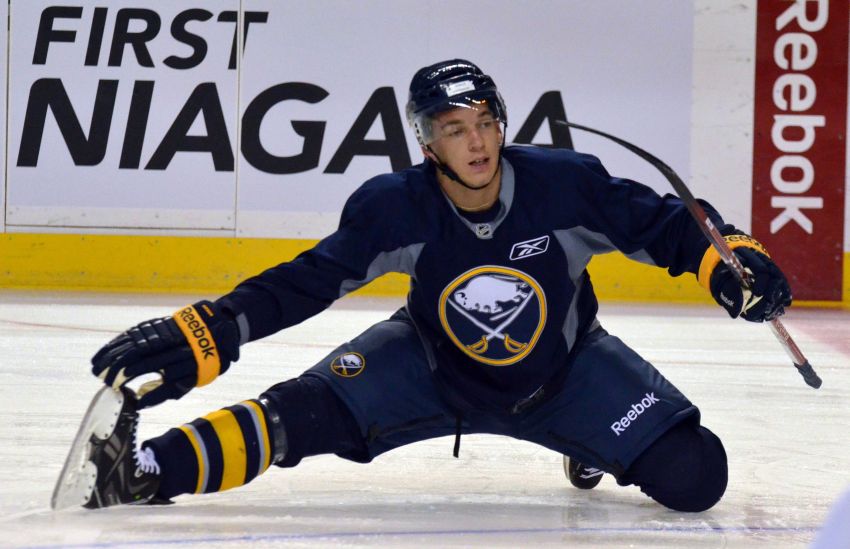 BUFFALO – Jim Montgomery put it up for a vote, so after his Dubuque Fighting Saints won the United States Hockey League championship in 2011, he asked his returning players to pick a new captain.

In addition to three 20-year-olds, the coach had a 19-year-old who played prominent minutes back for another season of junior hockey.

Incredibly, Montgomery’s players passed on the veterans, instead picking a 17-year-old Latvian to captain them.

His name was Zemgus Girgensons, and about a year earlier he had spoken very little English.

“I think he got 13 of the 16 votes to be captain,” Montgomery said by phone from Iowa earlier this week.

Something separates Girgensons among youngsters, makes him such an interesting talent the Sabres moved up and snatched him 14th overall at the NHL Entry Draft last month.

Sure, he’s an ultra-aggressive, hard-hitting forward with a strong scoring touch. Montgomery believes Girgensons could score 20 to 35 goals once he’s established in the NHL.

But Girgensons’ leadership qualities help elevate him to an elite prospect.

What made him a captain so young?

“It’s his will to win and his competitive drive, and his ability to understand what is needed to be done for a hockey club,” said Montgomery, a veteran of 122 NHL games over 12 professional seasons. “Obviously, everyone continues to become better as they grow old and they learn. But he learned and watches other people.

“Like, if he’s in Buffalo, he’s going to watch (captain) Jason Pominville, how he conducts himself and what he says. He’s going to learn from it.”

When Girgensons gets to Buffalo is unknown. Right now, he’s committed to the University of Vermont, where he’s currently taking summer courses.

He’s AHL-eligible, however, and turning professional could be enticing.

“At this point, I’m going to Vermont,” Girgensons said after the Sabres drafted him June 22. “I got to see after the next couple days what’s going on.”

Girgensons is seeking advice, and he insists he’ll make his own decision with his “heart.”

“I think he wants to gather information to see where he’s at and listen to the Sabres,” Montgomery said. “I know going to Vermont would allow him to get better prepared.

“I don’t know what would happen if the Sabres say, ‘Hey, we want to sign you and we think you can play.’ I think knowing him he would take that challenge.”

Is the NCAA the best place for Girgensons then?

“I don’t know that answer,” Montgomery said. “It’s hard for me to say (because) I don’t know anything about the Sabres’ depth charts and stuff. … I think that Vermont is definitely a place where he can develop and get better prepared to play in the NHL.

Girgensons has a knack for acclimating quickly.

He first arrived in the United States in 2009, playing for a team in Vermont named the Eastern Mountain Blades.

“I think within him playing five or 10 games everyone on the East Coast knew about him,” Montgomery said. “There was a special 15-year-old.”

When Montgomery got him the next year, Girgensons “was not that confident verbally at the time.”

“But in a matter of two months here, the beginning of his second year living in the States, he really started to pick up the nuances of language,” Montgomery said.

Girgensons picked up the nuances of the North American game quickly, too. Montgomery has compared him to a “Canadian kid.”

“It’s because of the way he plays the game, the passion he plays it with,” he said. “That was obvious from the first shift we saw him take in training camp.”

Montgomery sees similarities in Girgensons and Rod Brind’Amour, a notoriously hard worker he played with in Philadelphia.

“I think they both share the same drive and focus,” he said. “Sometimes I’d be amazed at Rod Brind’Amour, like how much extra he did, and then I watched Zemgus and he does more than anybody else. I don’t know where the energy level comes from.”