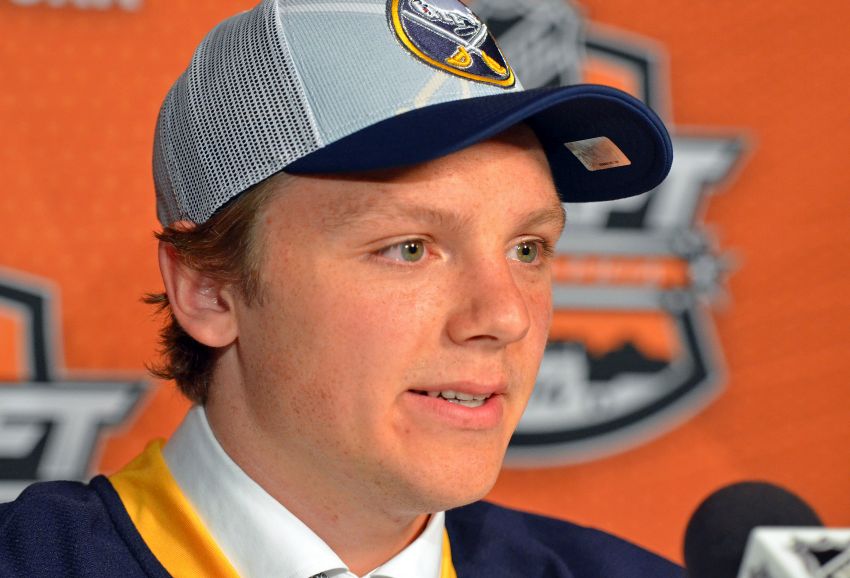 The Sabres put Sam Reinhart at the top of their list in May. ©2014, Dan Hickling, Olean Times Herald

PHILADELPHIA – Sam Reinhart said he had been “prepared for it for a long time.” The slick 18-year-old center knew the Buffalo Sabres, a team desperate for elite forward talent, wanted to draft him with the No. 2 pick.

“I’ve certainly visualized myself in this uniform,” Reinhart said Friday inside the Wells Fargo Center after the Sabres selected him at the NHL Entry Draft. “I’m just thrilled and ecstatic to really make an impact there and go to Buffalo for the first time.”

Tim Murrray had been ready to take Reinhart for a long time. The general manager said the Sabres put Reinhart No. 1 on their list during organizational meetings last month. The Sabres tweaked that list but never moved Reinhart.

When Murray approached the podium after the Florida Panthers selected stud defenseman Aaron Ekblad No. 1 overall, he didn’t hesitate or thank the fans watching back home in Buffalo.

He simply said the Sabres were taking Reinhart.

“You shouldn’t hesitate when you’re getting the first player on your list,” the rookie GM said.

Murray made it a priority to watch Reinhart after seeing him at the Canadian Hockey League Prospects Game. He followed the youngster for a week, went back to Canada a few weeks later and again for the playoffs, when Reinhart “was a dominant player.”

“He’s just so smart,” Murray said about Reinhart. “He makes players around him so much better that he would be extremely hard not to like.”

What separated Reinhart from the pack?

If Reinhart has his way, he’ll be wearing that Sabres uniform on opening night in October. The Kootenay Ice star, fresh off a 36-goal, 105-point Western Hockey League campaign, believes he’s ready to crack the NHL immediately.

Murray said he has “no idea” about Reinhart’s status for next season.

“He’s a young prospect,” he said. “So he has a big summer ahead of him. He’s a got a development camp, a rookie tournament and training camp and exhibition games. He’ll be judged each and every day of that schedule.”

The Sabres challenged prospects at the recent NHL scouting combine, asking them what would happen if they went back to junior.

Murray, despite three 2014 second-round picks in his hand, couldn’t secure another first-rounder like he wanted.

“I don’t know if I was close,” said Murray, who has picks 31, 39 and 49. “I made big offers. I went from the 20s and late teens thinking two seconds would do it. I offered three seconds to seven teams for one first.”

He wasn’t fretting over which player Florida would select first.

“At some point, you just sit down and whatever happens happens,” Murray said.

Murray also had talks with teams about moving down a couple spots if Florida took someone other than Ekblad.

Reinhart’s the fourth member of his family to be drafted by an NHL team. His father, Paul, was the No. 12 pick by Atlanta in 1979 and played 648 NHL games. His brother, Max, was a third-round pick in 2010 and has played 19 NHL games with Calgary. His other brother, Griffin, was the No. 4 pick by the New York Islanders in 2012.