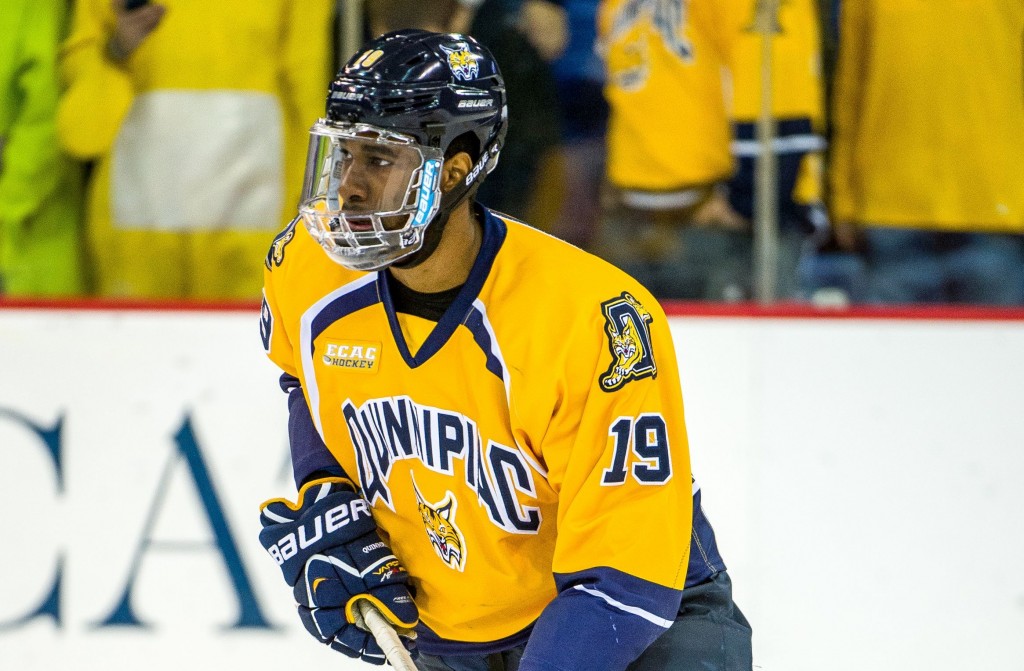 Jordan Samuels-Thomas had 50 goals in his NCAA career. ©2014, Quinnipiac Athletics

“He’s a man,” Rand Pecknold, Samuels’ coach at Quinnipiac University, said by phone this morning. “He’s as good of an athlete and (in) as good a physical shape as anyone in Buffalo’s organization. He’s phenomenal.”

That imposing frame will help the 24-year-old winger, who compiled 50 goals and 104 points over four NCAA seasons, at the next level.

“He’s got high-end potential,” Pecknold said. “I think his main strength is his ability to protect the puck down low, which is what the NHL is becoming. A lot of the hockey is the down low play, which is what makes him so intriguing.

“He’s big. … He’s really good at puck possession down low. That’s one thing NHL teams loved about him this year when they came to watch him.”

Samuels-Thomas obviously impressed the Sabres, who sent a 2015 seventh-round pick to the Winnipeg Jets for his rights Wednesday night. The Sabres must sign him by Aug. 15.

“My feeling is he’s ready to be a high-impact player at the AHL level,” he said. “He has the potential to play in the NHL. He just needs to keep working on his game. The main thing I think he needs to improve on is his consistency, bringing it every night and being great every night.”

“The main weakness when he got to Quinnipiac was just didn’t play defense,” Pecknold said. “He wasn’t committed to it, and he worked on that.”

Samuels-Thomas worked during 2011-12, a year he had to sit out as a transfer. Pecknold called that season an “an eye-opener” for the newcomer, a dominant goal scorer growing up.

“I think that year he realized, ‘I need to work on the rest of my game if I’m going to make the NHL one day,’” Pecknold said. “He’s very committed to it.”

By last season, Samuels-Thomas had developed a complete game. Pecknold used him late in one-goal contests.