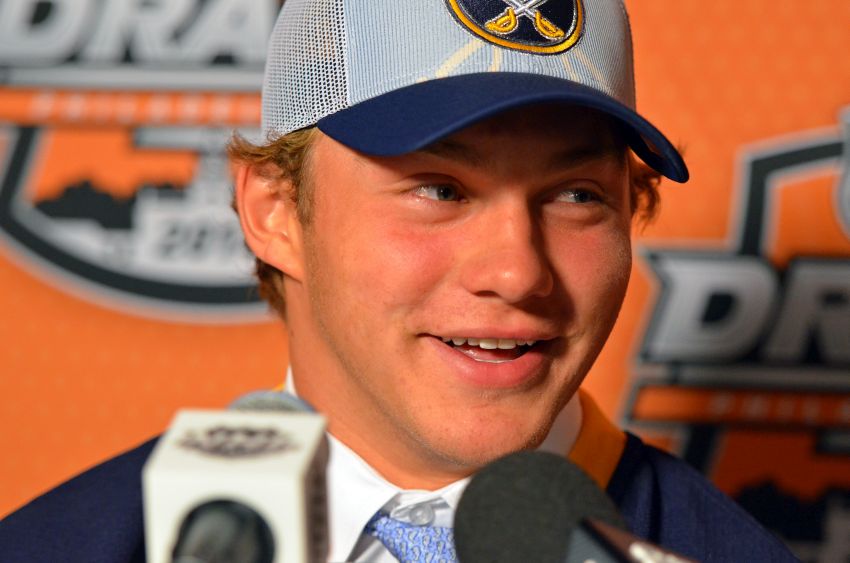 PHILADELPHIA – Brendan Lemieux thought he flunked his recent interview with the Buffalo Sabres badly. The team pushed the 18-year-old, grilling him about his relationship with his Barrie Colts teammates and other difficult subjects.

“We made it uncomfortable for him a little bit,” Buffalo Sabres general manager Tim Murray said Saturday after selecting Lemieux 31st overall at the NHL Entry Draft.

But the way Lemieux, the son of legendary NHL agitator and playoff hero Claude Lemieux, handled the questioning impressed Buffalo’s decision-makers, who had the winger pegged as a first-round talent.

“We thought he responded very well to some tough questions,” Murray said.

Like the Sabres, Lemieux figured he would be a first-rounder. He left the Wells Fargo Center “crushed” Friday night, unaware he would be the first selection of the second round hours later.

Before the draft started Saturday morning, Lemieux’s father said the Sabres could be interested.

“I had no idea I would drop out of the first round,” said Brendan Lemieux, who joked he had too much support. “I had no idea I was going to be picked (Saturday) morning. I walked in the stairway like two minutes before I was picked.”

Those Friday snubs are seared in the prospect’s memory.

The youngster plays a similar style to his father, who amassed 379 goals, 1,777 penalty minutes and won a Conn Smythe Trophy over his 21-year career.

“We like the style of game he plays,” Murray said about Brendan Lemieux. “He plays a chippy, intimidating style. But in saying that, he’s not a one-dimensional player. He can score goals. He can shoot the puck. He goes to the net. He goes to the dirty areas. We like the whole package.”

Lemieux possesses a unique skill set, one the Sabres have been lacking.

“He’s got a lot of jam, but he can play the game,” said Murray, who believes Lemieux can be a loud voice in the dressing room someday.

“He’s my biggest role model on and off the ice,” he said. “I’m proud of the career he had. I’m proud of the way he played and how hated he was. I just love that about him. I want to be that guy that can step up in the playoffs and really perform. … I want to come up big when it counts.”

But Claude Lemieux, a Montreal second-rounder in 1983, wants Brendan to carve his own path. He called his former teams passing on his son a “blessing.”

“I had nothing to do with Buffalo,” he said. “I know pretty much no one on the Buffalo staff except for (coach) Teddy Nolan. It’s his career, and it’s time to step outside my shadow and go play, be himself.”

He added: “I’m happy that he’s somewhere neutral and they took him for him.”

Claude Lemieux called Brendan a leader who “plays the game the right way.”

“I’m sure the fans will identify,” he said. “It’s the kind of player you need when you’re in a rebuilding mode. You need character players.”

Brendan Lemieux’s already talking about the NHL. He said he wants “to make a big impact” immediately.

“If that means playing in the NHL next year, that’s what I want to do,” he said.